Recreation of the 'Fastest computer in the Universe' that runs FORTH.

The Jupiter ACE was introduced in 1982 by a company named 'Jupiter Cantab' as 'probably the fastest computer in the universe'. Mainly because it was the first (and only) home computer at the time that ran Forth as it's main operating system. Since every other computer ran BASIC this was a remarkable choice, and it turned out to be a bad one. Only hardcore programmers dared to take up FORTH, and in the end only 8000 units were ever sold. Making them very rare and expensive nowadays so creating a replica is the closest I will ever get to owning one.

Building a replica of the Jupiter ACE  has been done before, and the super accurate replication of the original PCB by Grant Searle is probably the best example. The schematics were redrawn later by Bodo Wenzel in ORCAD, and a modified version was made by Isidro Nuñez Blanco De Arenas. Both builds were done 2003-2006 ( which shows if you look at the design of their websites), and things have changed a bit since then. PCB manufacturing is much cheaper now, and it's also easier to create custom plastic parts. Because what's lacking in all these rebuilds is the actual housing, which to me is a huge part of the charm of this machine. And using a 3D printer it cannot be too hard to replicate this.

To my surprise there are also no 3D models available , apart from the 'mini Jupiter ACE', which obviously it too inaccurate to use as a basis for a real housing. 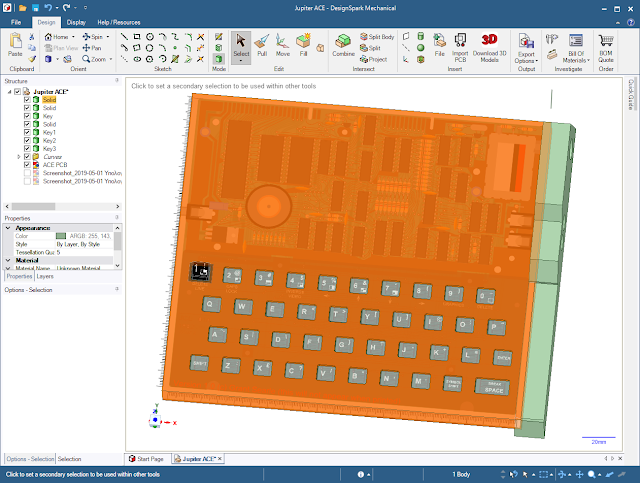 So I started out to do this myself, using my favourite 3D modelling software: 'DesignSpark Mechanical' (DSM). I used Grant's PCB layout, made it into a .png image and imported that into DSM. Since the drawing includes millimetre marks on the edge it was easy to scale it to exactly 100%.

That's a hard one. Getting a custom made rubber key-mat is beyond my financial capacity so that's not an option. I'll try to make them using my 3D printer. The main problem here is  to get the text on the keys. I considered printing this on adhesive film and just stick it on top of the key. Then I thought I could also print the keys in white, with the text sticking out. Then if I spray painted them black and sand the top it would reveal the text again. 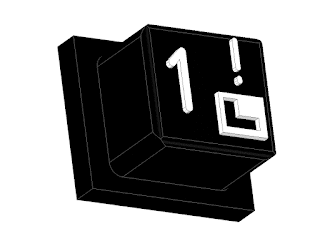 Looks great in my 3D software !. But how would it turn out in reality ?

Though it's possible to create the exact PCB replica using Grant Searle's PCB foils, that is not what I wanted. I did want to make some minor changes on the EPROM and RAM connections, and use standard mini switches for the keyboard. Also if the PCBs have to be made by a cheap Chinese shop, it's essential to have Gerber files. So, all in all a good incentive to replicate the schematics again, but now in KiCad. For years KiCad has been a bit troublesome to use, but over the last few years it has improved significantly and is now a serious EDA package. It's free, open source and multi-platform so it is becoming the de-facto standard for all open-source hardware projects.

I know this is late in the game, but your keycaps could have been printed in 2 colors if your printer supports the ability to change filaments at a specific layer height.  I've used this to great effect in a number of my projects.

Could be an option. It would indeed just require 1 filament change at a specific hight so it should be doable. It's something I have not done before but definitely worth trying.

If you printer supports it it’s pretty easy to do. The Plug  Panel on my H-500 was done that way.

I would just like to wish you good luck with your interesting project.

Having looked at Grant Searle's projects, I was thinking of doing something similar, but unfortunately my skills are less than my enthusiasm at present.

Then I saw your project.  If I can get one of the Chinese fabs to make me a decent pcb from your gerbers, then a new Ace becomes more of a possibility for me.

I had an original Ace back in the day and my recollections are that you couldn't do much with one without the RAM pack.  Have you considered adding a RAM expansion to your PCB design?  The Ace wasn't a sturdy unit and the keyboard wasn't very good.  Many times I remember pressing the keys a bit too hard, wobbling the RAM pack and resetting the machine.

That really is an original feature I could personally do without!

If this is of interest to you, there is a two chip design for a 96k ram expansion at https://www.jupiter-ace.co.uk/hardware_96kram_pack.html

Obviously, it's your decision, but adding this to the pcb wouldn't detract too much from the originality IMHO.  It would give you a much more usable device, though.

Please keep up the good work.

I will continue to follow your project with much interest.

Thanks for your comment, and great to see you are actually considering building one yourself. As I am (very slowly) approaching the end of the routing process, there is not much left for changing the design. The RAM pack is indeed a interesting addition, but there certainly won't be room on the PCB to have that included.

The keyboard will hopefully be slightly better than the original. I have already done some tests using the miniswitches and 3D-printed keys, and it seems to work well. You still won't be able to write a novel on it, but it's an improvement.

Once I finished the PCB, I'll have a few made in China. Then I will of course test it first, but if it's OK, I will probably sell the remaining boards. Which then could be your chance to get one. But I will of course publish the final Gerbers here on Hackaday, so feel free to order your own. And with all the KiCad design files available as well you might even want to add some modifications of your own.

Nice work you have been done so far! If you please allow me suggest you a couple of improvements:

# 60Hz support. It might require an extra 7400 and some solder jumpers

# Backporch for video signal, which will also provide a signal that best matches voltage and output impedance of rs170 (ntsc) video. Backporch itself is not necessary with white characters ovet black background, but the impedance/voltage matching is just a matter of using three calculated resistors instead of the output transistor.

I can make some drawings and post them on a page after this weekend, and then you can look at that and see if my suggestions worth the effort...

Thanks for the comments. Just returned from my holidays so I only just saw them.

I considered 60Hz support, but I'm not sure if that is still required. I suppose most modern display devices do not have any problems with 50 or 60 Hz. But I could be wrong.

I read about the 'backporch' issue but never really understood it. Could be due to my 'European / 50 Hz / PAL ' view of the world. But if you can send be some drawings I'd be most happy to integrate them. I have only just started the actual routing so there is still plenty of time to incorporate some changes.

To generate the backporch you can use a RC network that lingers the SYNC pulse and then use the "elongated" signal to blank the video signal. Using this principle you can take the links [1] and [2] as a reference to design the backporch circuit using spare gates.

The impedance/amplitude matching can be done with a bit of math considering the state of Sync and Video for the moments of SYNC TIP, VIDEO DARK, VIDEO WHITE for both open circuit and under 75 ohms load. The best part is that your backend video circuit consists of only 3 resistors. Please take a look at link [3]

Thanks again for your suggestions. I've just read all the info in your links, and it is an excellent explanation of the video signal generation. I'll certainly use this in my schematic.

Oh, and check out "Forth Programming" - they republished the original manual a year or so ago, and it's on Amazon!

I did have an Ace - it was cheaper than the Spectrums my friends had - and different. The build quality was awful but using FORTH was a really interesting thing to do. I'd love to create it (preferably with HDMI and a SD storage card) :-)

Nice! You have the first version with the vacuform housing) or the 'ACE4000' model ?

As I am aiming for staying close to the original as much as possibe, there will not be a SD card or HDMI output, but I will include a standard Video output.

Well,  holidays got in the way, so progress has been slow for the past month. Still working on routing the PCB. Which, since I wanted to do it manually, is quite a lot of work.

Nice that you're bringing this to life again. I remember seeing ads for this when I was in the UK in 82. I mentioned it to a friend of mine and he may have bought one, I seen to remember him complaining about the Chiclet keys; I'll have to ask him next time we meet. I admired Forth for what it could do with little resources as microprocessors were all I could afford, not Unix workstations like at work, but never got around to using it. I think I don't have enough brain cells left now to program in Forth, hahaha.

My experiences are similar. I also saw the ads, but never had one. And I'm not sure about my Forth capabilities either, but I expect it will take quite some time before I get to the actual programming....

10.5k 57 20
from my Palm Pilot days I have some of those foldable keyboards lying around and try to find a way making them usable via USB
Project Owner Contributor

276 8 7
[WIP] Keyboard based on Ergodox. But wireless?
Project Owner Contributor