The uRADMonitor is a plug-and-play, low power, self contained radiation monitoring device, connected to a centralised server component.

In the beginning there was the passion for technology. I decided to start a blog and write about the things I've built. I was more into high voltage, physics and various experiments, cool, but with little or zero use to those around me. Then I decided it was time to build something useful, to put my time and energy into something that would eventually come to do good. I already had the high voltage inverters and a few Geiger tubes in my toolbox. In just a few minutes my first Geiger counter was clicking indicating radiation detection. It was early 2011.

The uRADMonitor project continued on its mission to cover the planet with IOT detectors. At first it was only measuring radiation, now it added multiple parameters that offer an insight on the quality of our environment.

Dave Jones, from EEVBlog, did a nice review of uRADMonitor and covered everything from unpacking the unit to powering it up and getting the data online, and suddenly, the whole World learned about uRADMonitor. Thank you Dave, you really helped this project get to where it is today!

The uRADMonitor is a digital radiation dosimeter, enclosed in a rugged aluminium case. Designed to function as nodes, in a distributed network of radiation monitors,the uRADMonitor units are working together to achieve environmental radiation surveillance on a global scale.

Connectivity is a key element of the uRADMonitor design. All units are reporting the readings to a centralized server, where anyone interested can evaluate radiation levels all across the globe.

The devices can be employed in local, personal use, when one needs to constantly monitor a particular location. But the true advantage of this technology comes on a larger scale, where multiple units are working together, to help us understand variations in radiation levels, as affected by weather factors (like wind or rain) or geographic location. This is how the value and interest in this technology moves from personal use, to corporate, scientific or community applications.

By interconnecting a large number of radiation monitors, we are permanently informed on abnormal variations, helping us to protect our health and interests. The units are low power, needing practically no maintaince work and the setup is easy with only a cable to connect to the power supply and an Ethernet cable to connect the uRADMonitor to the Internet router.

Because the network is using the same type of detectors, manually tested and checked against a common reference, all numbers and charts are comparable from one location to another, making it easy to understand changes and differences.

Taking advantage of a clean, innovative design, the path from prototyping to production was shortened considerably. We've improved the power consumption, the size of electronics and the number of components involved. The internal high voltage circuits are functioning side by side with the digital signal paths, showing excellent stability. Our tests went as far as months of continuous runs for observing all system parameters. Now we are proud of the result. With under 1Watt consumption, the uRADMonitor units can run on almost any power source, including green, regenerable sources like solar or wind.

Designed as distributed measuring units, with the entire infrastructure already implemented, the current design can be extended for other uses, for example adding air sensors for monitoring its quality. Or U.V. sensors for the sun activity, rain and wind sensors to complement the radiation data.

There is already a large volume of data flowing trough the uRADMonitor network every minute. We've centralized all data and made it available on the webportal. Everyone can understand the readings, even those without a technical background. The radiation data is shown in charts, where normal behaviour implies a constant level with minor fluctiations. In case of nuclear incidents or any other unwanted events, the raising trend will be a clear indication that something is changing. This trully goes beyond numbers and radiation physics: the simplified way of showing the data, combined with the uniformity of the network is yet another important innovative feature introduced by the uRADMonitor design. This is probably the first network of this kind, that has reached this level of uniformity on a global scale.

I designed the uRADMonitor so it can be produced at reduced costs, allowing the network to grow rapidly. As a result, the uRADMonitor units have been easily put into production, with the first Model A available for immediate deployment. The next variants are on the design board, as this is only the begining of more exciting and innovative technologies that will follow.

A previous code revision is available as open source on Google code. Use it as an initial reference. The final code will be released when this project reaches a stable state.

Probably this is one of the best examples of Connected technology, combining the software with the hardware like poetry, going from microcontrollers to Geiger tube and high voltage inverters, coding in embedded C up to PHP and SQL. Hardware dosimeters to do the hard work, and webpages or Android phones to show the data, as the radiation measurements will also be available soon, via an Android app on the Google play. Technology interconnected at its best, to serve a useful purpose and help us all (global) stay safer.

As a software engineer, I found microcontrollers exciting, and easy to use. I didn't learn electronics in school, it was something I acquired during my spare time activities. But an effort done with passion overcomes obstacles easier. With my new advances in electronics, I decided to build a radiation monitoring station, with an Ethernet interface to have it function in an automated fashion by pushing data online for anyone to view. Slowly, the idea I was looking for, was shaping into reality.

The station, named uRADMonitor (from micro radiation monitor), quickly caught local press attention. It was featured in online and local publications, and I even had the chance to talk about it on TV.

Pushing things forward I got to learn about PCB design, tiny SMD electronics and hardware bugs (worse than any bugs known to a software developer). It was a long road of finding mistakes and perfecting the design. Some of that is documented in multiple posts on my blog and progress can be tracked there. But finally, in October 2013, precisely one year after my original uRADMonitor station, the first prototype for the new distributed network of radiation detectorswas seeing the daylight and passing the first tests with good results. 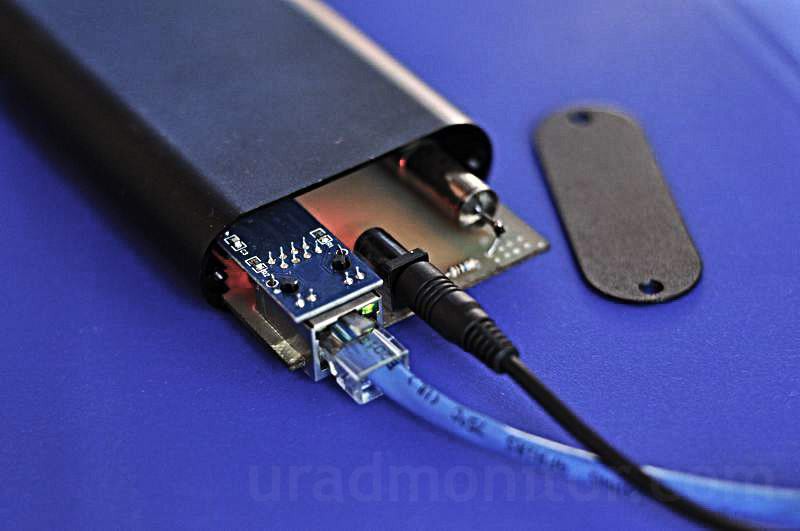 This is how uRADMonitor began, in an effort of building a distributed global network of detectors, calibrated to the same reference to offer consistent radiation measurements regardless of location, to function autonomously and use very little power while pushing the data online to the centralised webportal and to be as plug-and-playable as possible requiring the user to only plug in the power cable (5V DC) and the Ethernet cable (for Internet access). All the rest is done automatically: registering to the network for an IP via DHCP, accurately measuring time and radiation pulses and finally sending everything out to the server