STM32F103C8T6 is a microcontroller which can be used as an alternative to the Arduino boards. Arduino would have been the first board for many hobbyists (including me) and engineers out there when they started with electronics.

However, as we start building more and dig deep we would soon realise that Arduino is not industry ready and its 8-bit CPU with a ridiculously slow clock, it does not give you enough juice for your projects. Hopefully though, we have the new STM32F103C8T6 STM32 Development Boards(Blue Pill) in the market now which can easily outperform Arduino with its 32-bit CPU and ARM Cortex M3 architecture. Another honey pot here is that we can use the same old Arduino IDE to program our STM32 Boards. So in this tutorial, let us get started with the STM32 to know a bit of basics about this board and blink the on-board LED using the Arduino IDE.

These microcontrollers are made by STMicroelectronics, which is a global independent semiconductor company.

Board with STM32F103C8T6 as it's brain are also nicknamed as Blue Pill.

Specifications of STM32F103C8T6 Blue Pill board

GigaDevice, the leading provider of Non-Volatile Memory (NVM) devices, is the company engaged in advanced memory and related chip design in Mainland China established in 2005.

GigaDevice made STM's twin which has more faster speed due to faster clock of 108 MHz as compared to 72 MHz of STM.

Like STM, these are also based on the ARM CortexTM-M3 RISC core with best ratio in terms of processing power, reduced power consumption and peripheral set. The CortexTM-M3 is a next generation processor core which is tightly coupled with a Nested Vectored Interrupt Controller (NVIC), SysTick timer and advanced debug support.

Comparison between the two devices

Almost all the specifications and details of both the microcontrollers are same with same flash size, RAM, processor core and pinouts. 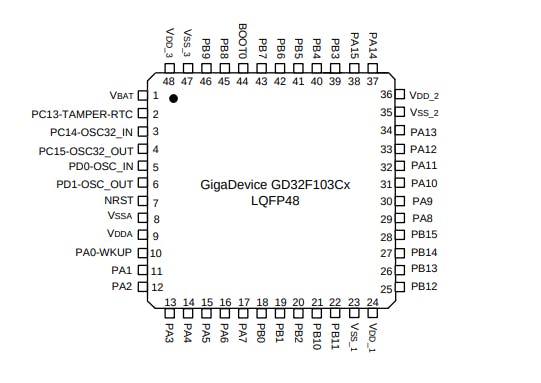 The most significant difference is that the GD32F103C8T6 has more operating frequency with 108 MHz as compared to the 72 MHz of STM32F103C8T6. So, If you are looking for a faster speed for processing the long codes and commands with bit big calculation, GigaDevice has a proper alternative. Although, you may need to make some changes when you start programming GigaDevice board so as to make delay() function and other timer related functions. The delay() functions are hard coded loops of nops which assume 72Mhz, so that would need to be changed as well.

You can go through these changes in stm32.h:

I wondered, why they made this IC. I don't see any benefits from 108MHz... It will be better to add EEPROM like in ATmega.

Most of us would not build our own blue pills but buy them off the shelf. Do you know if any module manufacturers have substituted the GigaDevice MCU for the STM one?

The comparison would be easier to read if you used a side by side HTML table. You may need to go into HTML mode to create a table.

I will try finding the store link or the manufacturer details and will update the project.

For comparison, actually all the specs are the same for both the microcontrollers. The only difference between both of them is that GigaDevice MCU has faster operating frequency as compared to STM. Even though, I will create a table for that.