Lighting up a rare LED matrix display from the 1970's

I have been collecting vintage LED indicators and displays for decades. The earliest examples date mostly from the 1970’s and 80’s, made by a handful of manufacturers e.g. Monsanto, Hewlett Packard, Fairchild, National Semiconductor and Litronix. There are also some interesting Russian “clones” and other rare parts made in Germany and Poland. With so many examples to document and photograph, the difficult decision was where to begin; I decided start with my rarest item: the HP 5082-7002.

Several years ago I purchased an interesting looking component that was being sold on eBay for scrap gold recovery. I could tell from the blurred photos it was some kind of optical sensor or display, and to my delight, it turned out to be a visible (red) LED matrix display, like nothing I had ever seen before.

The Hewlett Packard 5082-7002 is a dot matrix LED display, housed in a “luxurious” chunky gold plated carrier with a (sapphire?) glass cover. There is an array of 5 x 7 (35 total) individual LED die, mounted on a ceramic PCB substrate with gold traces and bearing the “HP” logo.  It does not appear that these parts ever went into mass-production, however there is a date code of “051”. I believe this corresponds to “Year: 0, Week: 51” which would be December 1970.

Despite extensive searches online and correspondence with fellow collectors, who were unaware of the existence of this part, there appears to be no datasheet or references to the part number, so my guess is that it is in fact a prototype. Perhaps this was used during development of 5082-7100 series matrix displays, which were built into in some of HP’s calculators and computers, or it may have been a custom design for military / industrial / aerospace applications.

It would seem logical that this is the next part in the series after the 5082-7000 “hybrid” displays, but before the advent of 5082-7100 series multiple-character matrix displays.

I followed the tracks to work out which pins are connected rows and columns, and set out to build a test shield for an Arduino Uno.  I decided to drive them as “rows” of 5. The max output of Arduino I/O pins is rated at 40mA, so in theory, I could simultaneously power up to 5 LEDs in parallel at 8mA using 1 pin. In practice, using strobe/multiplexing, the duty cycle is much less: 1/7 or 1/5 depending if you drive by rows (7) or columns (5) respectively. The 5 current limiting series resistors are 470 Ohms (¼ Watt). My preference is to use carbon composition resistors (e.g. Allen Bradley). I love the “retro look” of them and I think they compliment the vintage LEDs. 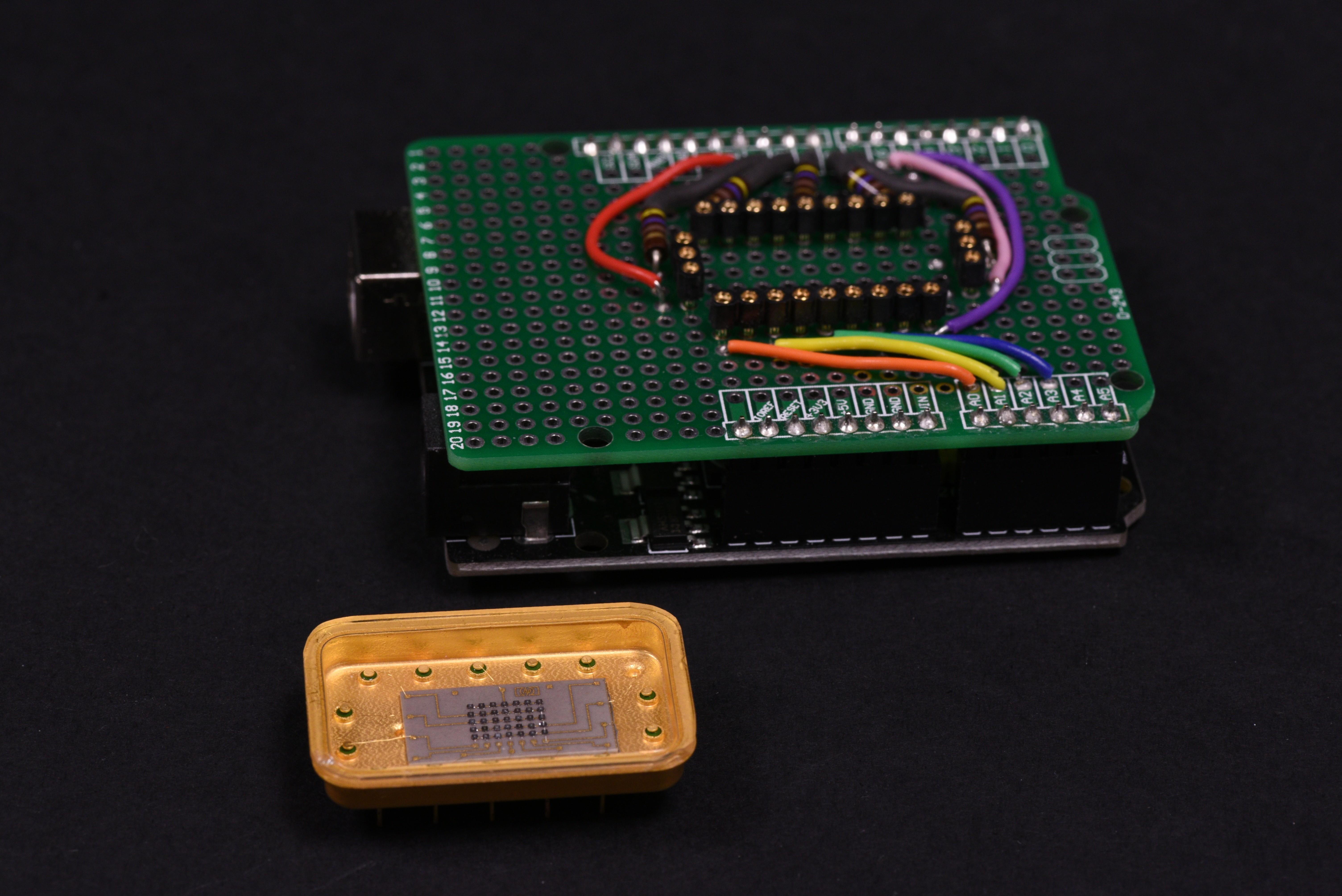 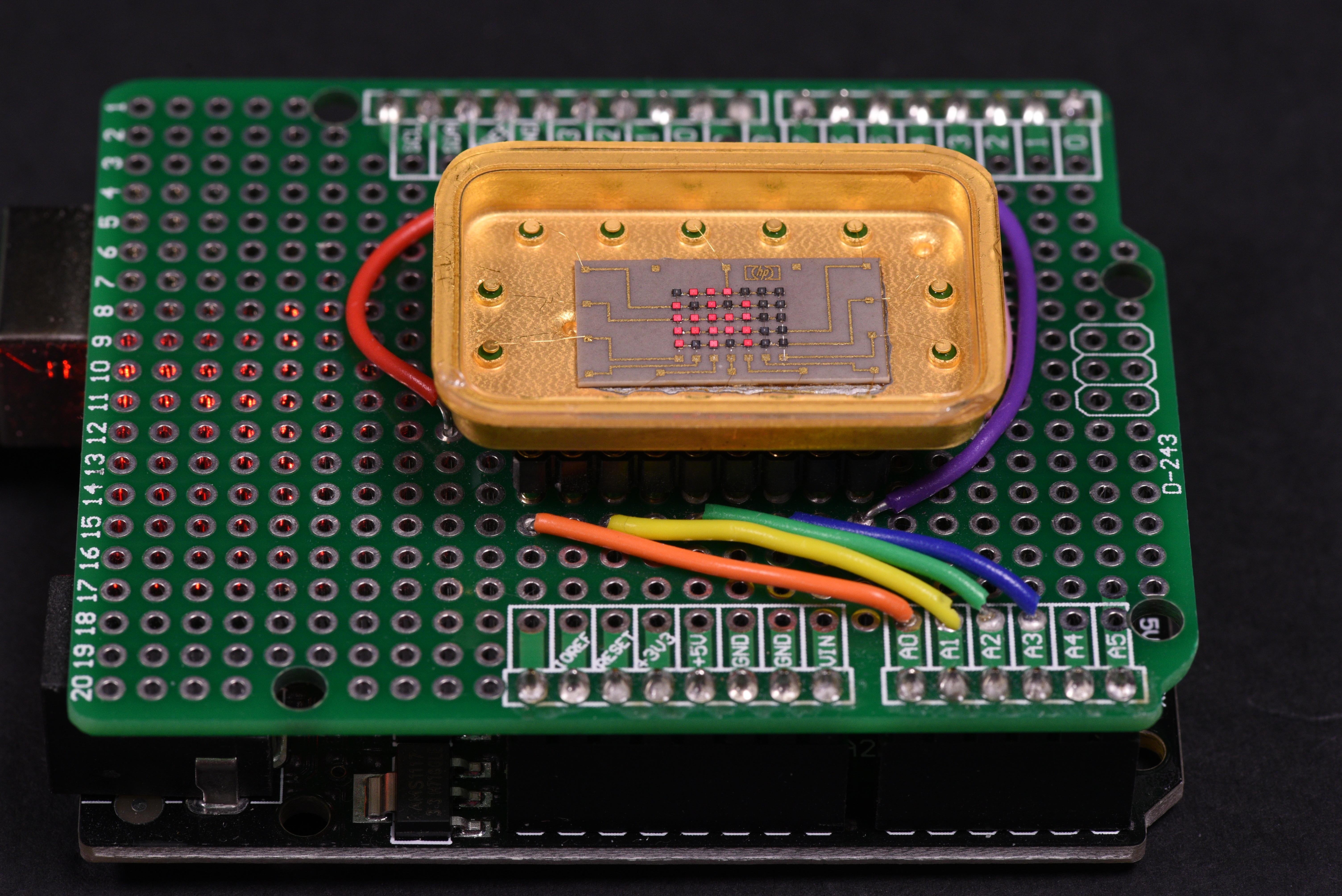 I had already written Arduino code for testing some TIL-305 matrix displays, so it was relatively simple to transpose the pins in my sketch for this configuration. The test code permits animations of up to 150 different alphanumeric characters/symbols, and (of course) some animated sprites inspired by retro video games.

Notes on the LED die

The individual LED die are what appears to be a GaAsP red emitting chips, with a “slotted” mask, similar to those used in the 5082–7000 series of hybrid BCD (Binary Coded Decimal) numeric displays.

The more recently manufactured batches of these HP displays (part number 5082-7010 dated 1987) are built with different LED die sporting a “cross” shaped metallic mask; a friend told me these are more efficient and generate less heat than the “slotted” mask LED emitters.

Approximately the same time, in the early 1970s, the epoxy cased Monsanto MAN-2A and Texas Instruments TIL-305 and several other equivalent displays entered the market and represented a cheaper alternative to the 5081-7100 series chips which were...

The 2015 Hackaday Prize
A nice little shield for 4-digit 7-segment LED display, just about what I have been struggling in finding over the internet.
Project Owner Contributor