Effect change in your surroundings by wearing these AI-enabled glasses. Turn on lights, control smart speakers. ShAIdes is a transparent UI for the real world.

See it in action: https://youtu.be/7UYi-exvHr0

Effect change in your surroundings by wearing these AI-enabled glasses. ShAIdes is a transparent UI for the real world.

A small CSI camera is attached to the frames of a pair of glasses, capturing what the wearer is seeing. The camera feeds real-time images to an NVIDIA Jetson Nano. The Jetson runs two separate image classification Convolutional Neural Network (CNN) models on each image, one to detect objects, and another to detect gestures made by the wearer.

A CNN was built using PyTorch and trained on two different data sets to generate independent models for object and gesture detection. The object detection model was trained on over 13,700 images, and the gesture detection model on 19,500 images. Each object/gesture was captured from many angles, many distances, and under many lighting conditions to allow the model to find the key features that need to be recognized, while ignoring noise.

As an example, here is a lamp that was trained for in the objects model: 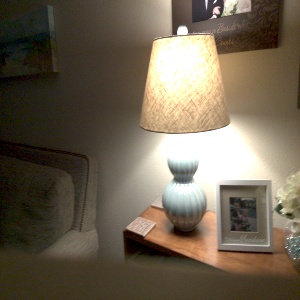 And a wave that was trained for in the gestures model: 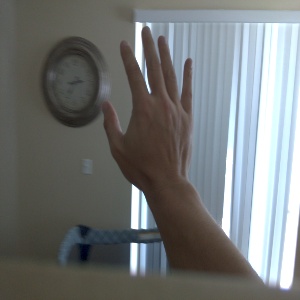 With that training completed, running inference on the following image against both models will result in high scores for both the lamp and a wave: 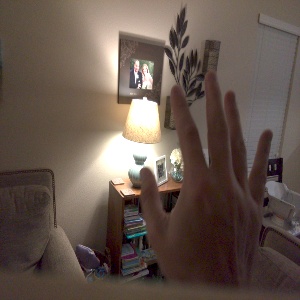 I trained on g3s.xlarge instances at Amazon AWS, with NVIDIA Tesla M60 GPUs. The Deep Learning AMI (Ubuntu) Version 23.1 image has lots of machine learning packages preinstalled, so it's super easy to use. Just launch an EC2 instance from the web dashboard, then clone my github repo:

Then start up a Python3 environment with PyTorch and dependencies and switch to my codebase:

Now, run my training script (make sure to set the classifier_type and class_count variables to specify which model type you are training, and how many classes it contains):

That's it! Now, watch the output to see when the test accuracy gets to a good level (percentage in the 90s).

This will generate *.model output files from each epoch that you can download, e.g. with scp to use with the infer_rt.py script.

To train for your own purposes, just place your own images in the data_objects and data_gestures folders under train and test. You can make your own folders there if you want to add new objects or gestures.

To capture so much training data, I developed an automated data collection pipeline.

The system needs to respond in real-time to user interactions with the environment for a pleasant user experience. I needed something that would provide massively parallel processing to deal with real-time image processing and inference against two models. I also needed something small, with relatively low power consumption requirements, and low cost. In this case, the Jetson Nano turned out to be a great platform for meeting all of these requirements.

Images are captured and processed at a rate of ~5 frames per second. The processing is just fast enough that I had the luxury of applying some 'smoothing' techniques to improve the user experience. The algorithm remembers the last 3 objects and gestures detected, and if an object/gesture combination is detected anywhere within this look-back, the action is fired. This avoids potentially frustrating edge cases in which the user's gesture covers the object in frame, preventing proper detection. Given the reasonably high frame rate, it is imperceptible to the user...

Why not use an endoscope camera and run it with TF Lite on your phone? Endoscope cameras can be had for like two bucks on Alie. Then capture a photo on handclap or finger snap, so that you don't have to drain the battery by running the camera all the time.

Thanks for the thoughts, miniaturization is definitely on my mind as I move beyond the prototype stage.  I intend to experiment a bit with TF Lite, but have my doubts about a phone or micocontroller running this very well.  It taxes a Jetson.

Play Doom on a giant screen using your body as the controller.
Project Owner Contributor