A DIY tube stereo, using parts from a Heathkit AA-100

This project was featured on Hackaday!

Tube circuits contain LETHAL voltages! Don't try to build this stuff if you don't know what you're doing!

In the summer of 2014 I decided to build a vacuum tube stereo.

I had tried to find a Dynaco ST-70, the most popular tube stereo ever, to restore. But these are expensive, even in disrepair. A friend's dad had given me non-functional Heathkit AA-100, but I didn't like the look of the amp. It also doesn't have a reputation for great sound. So I decided to use the tubes and transformers (the expensive stuff) from the AA-100 to build a clone of an ST-70. I found a DIY amp builder named Tom McNally who had done the same thing in 2005.

I started by drawing a schematic. There is a lot of information and parts online for ST-70s. Tom McNally had used a PCB from Parks Audio called the DIYTube ST-70 Driver for the input stage. I did as well. The output stage was taken directly from the Heathkit AA-100 schematic. For the power supply, I made my own PCB based on several designs for ST-70 kits I found online. For this I got some tips from Tom and the awesome folks at Audiokarma.org (a huge thank-you to dgillespie and kward). I simulated several sections of the circuit using LTSpice and PSUD2. The complete schematic is linked below.

Next thing was the chassis. I knew I wanted some combo of wood and metal. I found photos of several amps online s inspiration:

Using these as a starting point, I used Sketchup to create a model of the chassis. I decided to mount the output transformers on brackets instead of inset in the baseplate (like they were in the AA-100) to simplify the metalwork and free up space inside the chassis. Here are photos of the completed model (link below):

I am not a woodworker, but I have a father-in-law who is. He kindly agreed to build the wood part of the chassis. I sent him drawings; we made a few adjustments, and a few weeks later he emailed me this photo:

The wood is cherry. You can see how the finish darkens and deepens over time by comparing to the photos at the bottom of this post. The bottom panel is removable; I decided to remove it to aid convection.

In the meantime I removed the transformers and fuse holder from my AA-100:

I discovered that the transformers were rusted and covered in wax, so I sanded and painted the cores with Rustoleum:

Next I ordered all the parts (a BOM is linked below), including three 1/8" aluminum sheets cut to size for the top, back, and front from onlinemetals.com. I then began the metalwork. Incidentally, this was the most painful part of the job, and if I had to do it again would spring for custom drilling. First I laid out the parts:

Then I drilled and punched: 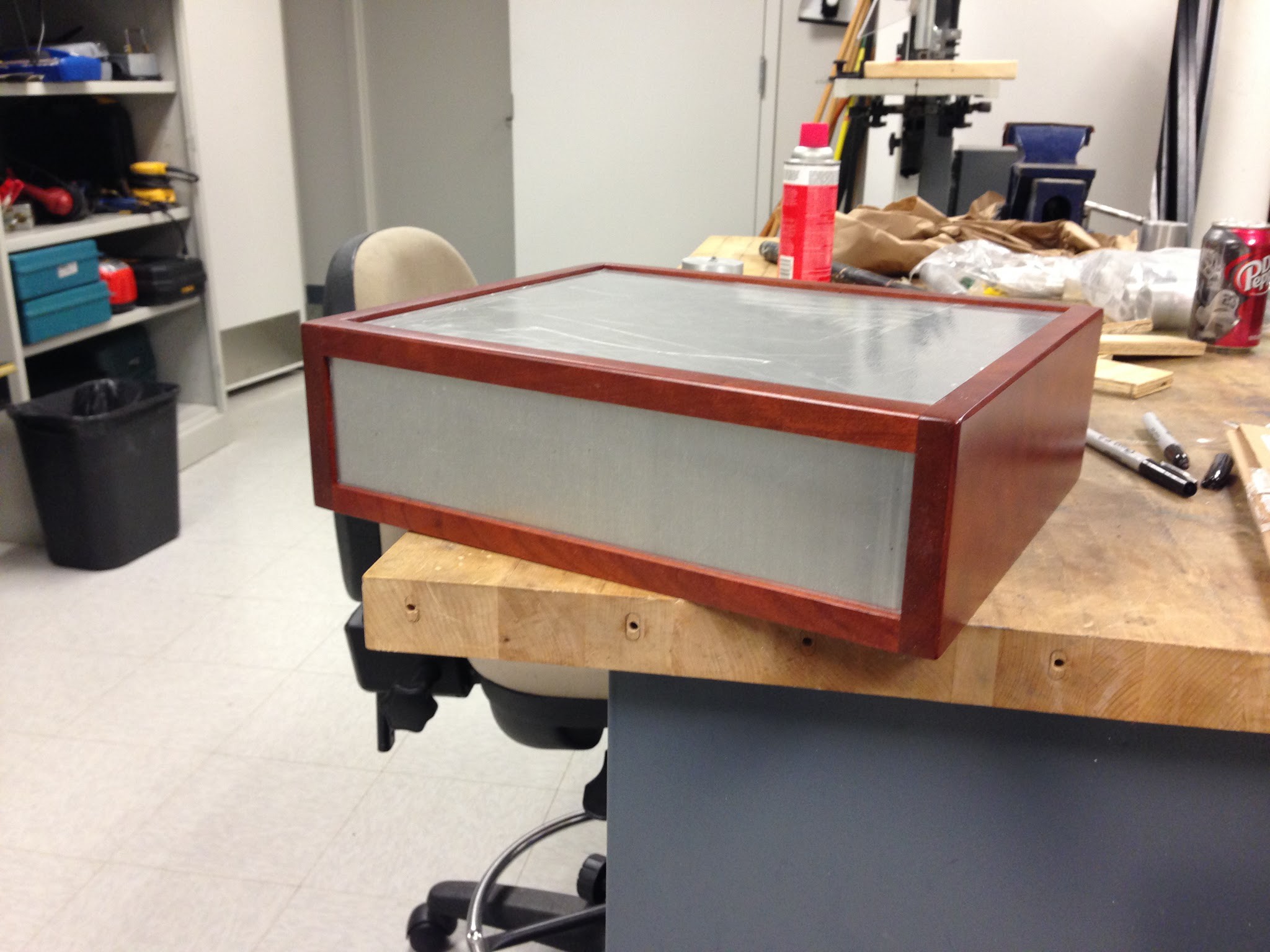 I am super-proud of this vintage meter I got on eBay. It was made in the USSR. I removed the rectifier so I could use it with DC voltage instead of AC. 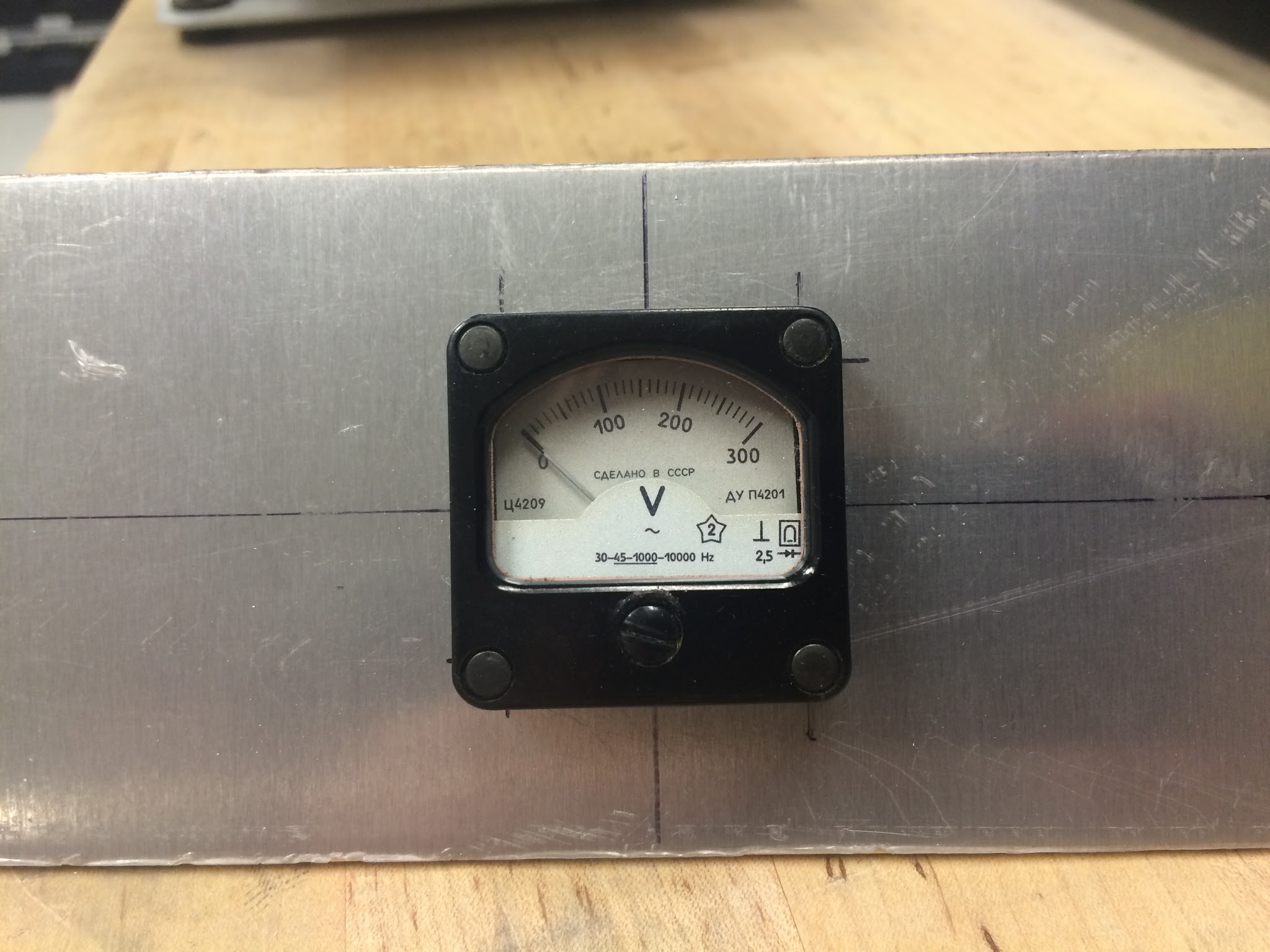 I wasn't happy with the look of this metal. The stock aluminum finish wasn't even and it was impossible to prevent a few dents and scratches. I found a tutorial online for brushing it by hand. It's a simple process: you brush the Al with 220 grit sandpaper using a guide block to make sure all the strokes go in the same direction. Then you brush it again with Scotchbrite to soften it. I was happy with the result: 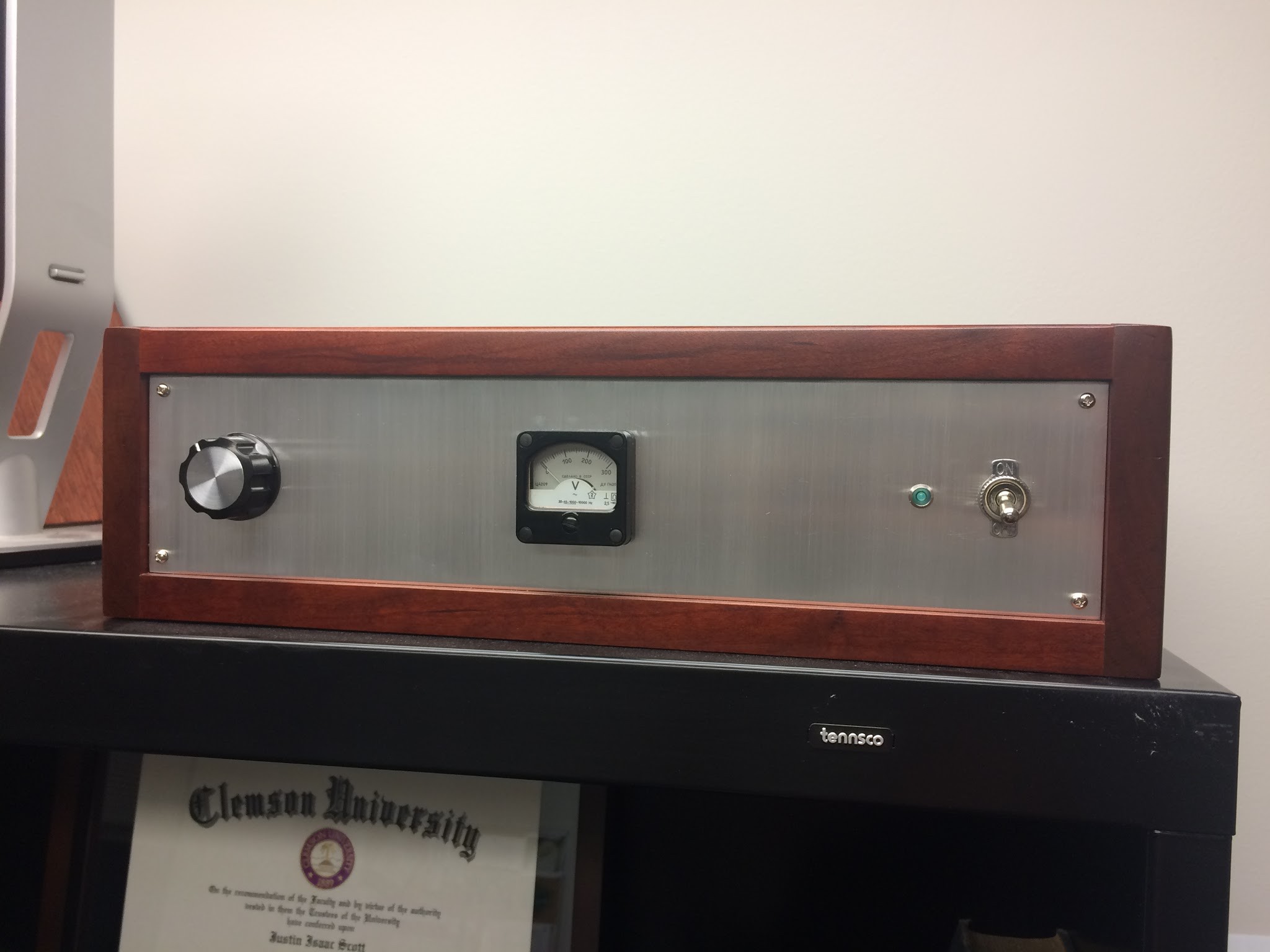 One other note: the vent holes around the tubes didn't look great after drilling and using a deburr tool. A mechanical engineer coworker suggested I pretty them up using a counter sink bit on our mill, setting the stop so I went to the same depth on each one. Here is the result:

Next was wiring it up. Here is a photo of the PCB I designed for the power supply. I ordered it from dirtypcbs.com, which was the cheapest I could find despite getting 10 boards when I only needed one.

Here is a photo of the diytube ST-70 driver board:

First thing I wired was...

Thanks for the illustrated story. It's interesting how in the past the tubes would be hidden inside the casing, perhaps a glimpse could be seen through the ventilation holes but nowadays the tubes are displayed in their full glory.

True! Whenever I see modern amps with the tubes hidden, I think "what a shame!"

Modifying a free(swag) 12v to 5v power adapter to be 12v to 3.3v instead. As simple as 1 resistor change out.
Project Owner Contributor

The 2018 Hackaday Prize
This is a guide to build & improve this $14 DIY Ebay kit as the OEM docs (also incl. here) are borderline Chinglish.
Project Owner Contributor