Robotic Arm with the look of a small Industrial KUKA KR Agilus robot but on a hobby scale and tight budget.

Why did I create this Robotic Arm?

It all started while watching YouTube when I came across a video titled "Dope Tech: Camera Robots!" and after watching the video was very inspired by the idea of building my very own robot arm.

After that video I started to search if it was possible to build my own robotic arm and if so how much would it cost as the dope tech video mention the price for one of these things to be astronomical. That was until I remembered that I owned a 3D printer that I got for my birthday (Creality Ender 3 Pro) and that I was a fairly competent 3D modeler on Fusion 360. Now after searching for "3D printed robotic arms" I came across many videos similar to this.

So while servos are easier to run as they don't need drivers along with having a potentiometer to ensure they always move to the correct position, they are quite jittery and can be observed in the video above. Below is a video I came across depicting the use of stepper motors for movement and is much smoother and makes the robot arm seem more professional in my eyes.

This video shows comical ways of using the robot arm but demonstrates the smoothness of the robot well.

On the other hand stepper motors are much smother and have continuous rotation meaning they are not limited to 180 degrees of movement (yes I do know you can buy continuous rotation servos but they are still jittery). Obviously servos end up being cheaper but not buy much as metal geared cheap servos come in at approx. $14 NZD from Banggood ( a more reliable Chinese electronics source and far cheaper than buying locally). Steppers from Banggood are around the same price but can only be found in the very common NEMA 17 size ( NEMA refers to the standard for stepper motors mounting and shape and was formed by the National Electrical Manufacturers Association and makes designing mounts for in the robot arm easy as stepper motor, eg: NEMA 17, the same size across different manufactures )

Where to buy Stepper Motors?

With some Googling I have found that on another Chinese goods website called AliExpress who sells Stepper motors for very cheap but I have used this website to purchase things before. It is hands down NOT reliable and with shipping time sometimes taking up to months is quite off putting. But I found a company on AliExpress who sells Stepper motors very cheap and goes by the name of "Stepper Online". It turns out they have their own online store with a whole array of steppers in every size possible and is a world wide company with warehouses in Australia which mean fast shipping to NZ!

After deciding that stepper motors are the appropriate choice for my robotic arm the choices for an affordable electronics becomes more narrow. Researching other 3D printed robot arm I found that most "cheap" arm use the very common RAMPS 1.4 control board.

The blue board pictured above is an Arduino Mega, this is the brains of the robot arm as such and interprets the Gcode file. The big red board is the break out board which contains all of the necessary electrical components to interface with the Arduino as well as the stepper motor drivers ( small red boards ). These boards go for around $15 on banggood and include the red board and stepper drivers while the blue board (the Arduino mega) goes for around $5 as is a cloned board. A cloned Arduino functions the same as a legit one from Adruino.com but is about a fifth of the price.

What about newer RAMPS boards?

The main differences between the iterations between the three boards is the heatsink added to the MOSFET's, Power connecter changed to screw type as the last ones were prone to over heating and melting. RAMPS 1.6 can also handle more power with better heat dissipation. Therefore I if the price is right I will definitely look to go with the RAMPS 1.6 as has much better feature

In terms of stepper drivers I found that the DRV8825 stepper driver is compatible with RAMPS boards but these ones can handle up to 1.5 Amps without cooling ( 2.5A with cooling ) while A4988 can only handle 1.2 Amps ( 2A with cooling ) comparatively. Also the DRV8825 are capable of 1/32 micro-stepping compared to the A4988 can only achieve 1/16 micro-stepping. So which one is better? Well I will probably go with the DRV8825 just because of their higher max current and the high resolution micro-stepping thus meaning much smoother movement of the robotic arm with out torque loss and allowing the robot arm to lift more.

Next up was the task of drawing out concept sketches of how the robot would look as well as how each piece will of the arm will look and where the stepper motor will be placed. First up here is a diagram of a industrial robot to better understand the 6DOF title, which stands for six degrees of freedom. 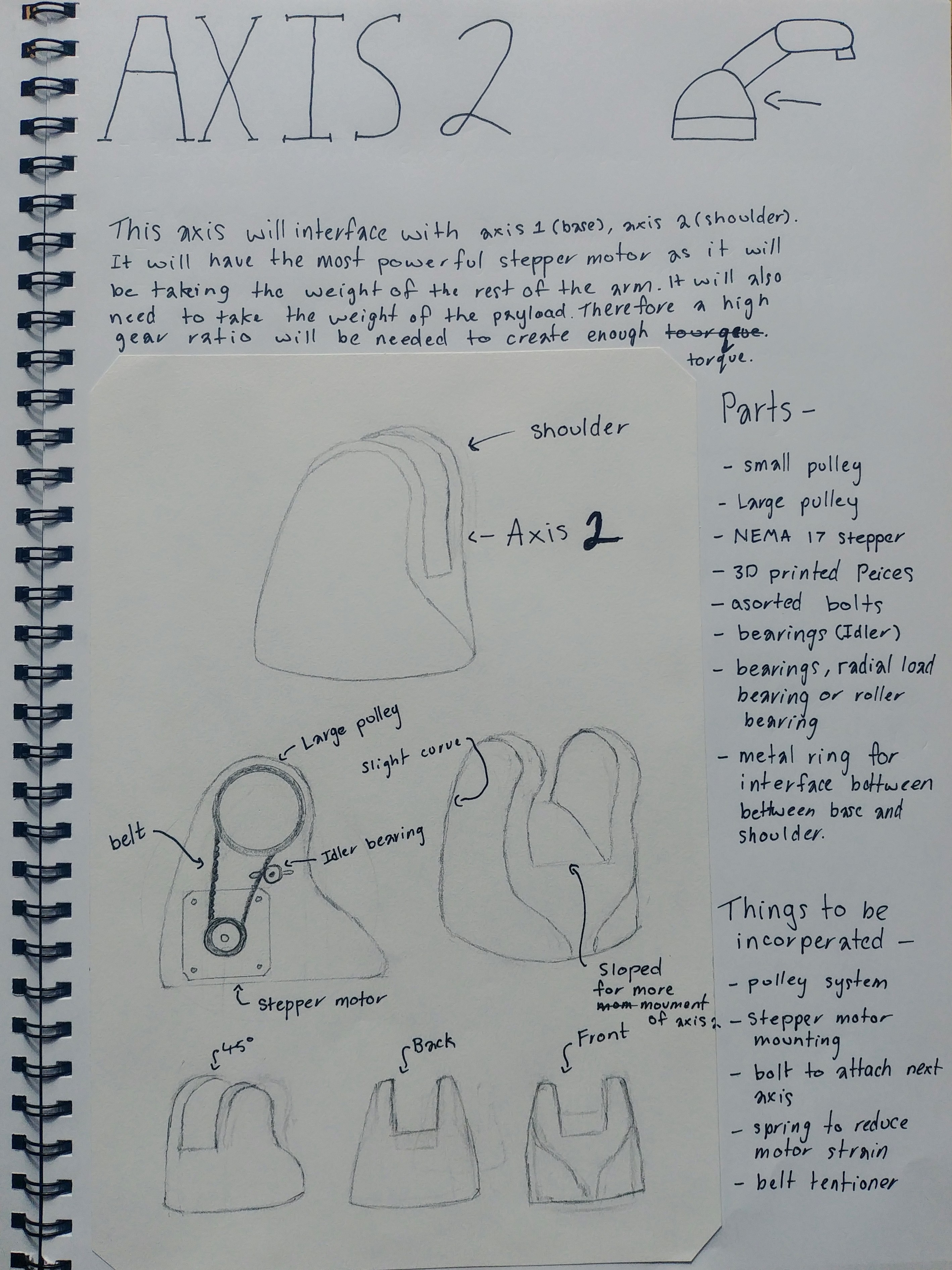