A slightly more intermediate project involving a unique pH sensor and an Arduino which is used to measure the pH level of solutions.

Wrapping up 2019, this interesting project provides a unique curve to the capability of the Arduino and its compatible sensors, as with this Liquid pH0-14 Detection Sensor, we can now find the pH level or 'power of hydrogen' (hydrogen ion concentration) measurement of substances. With the pH scale from 0 to 14 with 7 being neutral, < 7 being acidic and > 7 being alkaline/basic, this project is helpful for you to measure various types of solutions to be able to alter it or for you to mix it with other solutions. This sensor isn't very common online and is only sold from certain dealers with little documentation provided but with this project, everything is provided for you to start experimenting with this sensor. The components needed include:
- 1 Liquid pH0-14 Detection Sensor
- 1 BNC pH Electrode Probe
- 4 Jumper Wires (Male to Female)
- 1 Arduino (the Seeeduino v4.2 is used in this example)
- 1 USB Data Cable (depends on the Arduino)

1. Before starting, make sure that no external power is applied to the Arduino board or any of the components involved, as we want to prevent any short circuits from occurring when connecting everything together.
2. Firstly, plug the male BNC connector of the electrode probe to the female BNC connector of the sensor board.
3. After that, use a jumper wire to connect the PO (Analog pH Value) pin of the pH sensor to A0 (analog pin 0) of the Arduino.
4. Then, use two jumper wires to connect the two GND (-) pins of the sensor to GND (-) pins of the Arduino.
5. Lastly, use another jumper wire to connect the VCC (+) pin of the pH sensor to the +5v pin of the Arduino for its power.
6. Now, you can fill the capsule of the pH sensor (the cap covering the tip) with whatever solution which you want to measure and you can power the circuit up.

Before using this sensor to measure different solutions in order to gain its pH reading, it is necessary and highly recommended that you calibrate the sensor to be as accurate as possible before starting. This process may seem complex to do but it is simply done by turning the on-board potentiometer either clockwise or anti-clockwise depending on whether its reading is higher or lower than normal. For this test, it is best that you place the pH sensor in a solution which you are already certain of its pH level, then try and match the reading which the sensor outputs to the solution's known measurement. This would ensure that the other solutions tested are also accurate and with this said, it is best that you wash off the tip of the pH sensor after every solution to ensure an accurate reading further-on. The picture below shows how you would calibrate this sensor by turning the potentiometer with a flathead screwdriver: 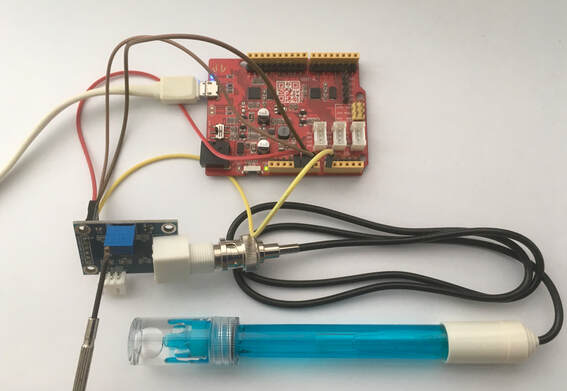 The code for this project is fairly interesting as it does have some unique structures and commands which you may have not come across before. Firstly, if we start from the top line of the code, we first define the analog pin A0 (called SensorPin) on the Arduino which the pH sensor will feed its data into. Then, we create an integer storage variable, named avgValue, to store the raw data which we will receive from the sensor as this information will be manipulated later for us to use. Next, with the float variable named 'b', we can then have the ability to store integers with a decimal point but with a limited amount of precision, however, this variable is enough for us and is used in the code to store the output values for us to read as explained later. On the next line, we declare an integer array/buffer array, called buf[10], composed of 10 separate integer samples (buf1, buf2, buf3, etc). The temp variable in the buffer array is used later to store certain elements in the array for later, where certain elements will be placed into this variable for us to get information out of. Now, moving on to the void setup section of the code, we start by triggering the Arduino's on-board LED to indicate that the LED blinks whenever it is receiving signals from the sensor...

A beginner to mid-level project utilising an inexpensive ultrasonic sensor, an Arduino and some intermediate code language.
Project Owner Contributor

A simple project for any electronic hobbyist interested in weather-related projects with the help of an Arduino and a "DHT" humidity sensor.
Project Owner Contributor