My second generation TDR which aims to be standalone (no oscilloscope) and as cheap as possible while being usable.

I promised this log for several times and now it is finally here. Let's start with how a rising edge looks. 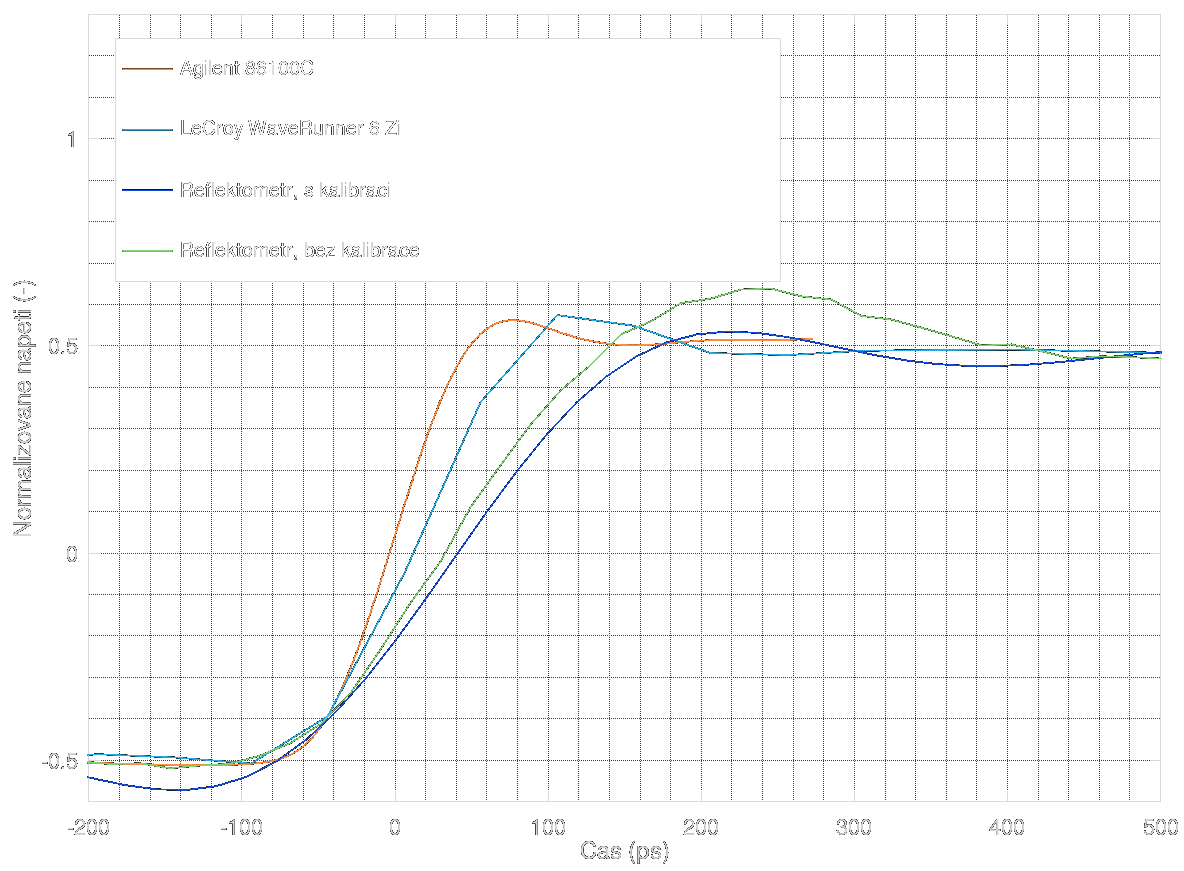 The orange and light blue ones were measured using commercial devices, the Agilent 86100C and LeCroy WaveRunner (this one was already mentioned last time). As you can see, the Agilent has the highest risetime (its bandwidth is about 26 GHz), about 89 ps which corresponds to the true waveform of the CML buffer pulse generator. Then the LeCroy, which cannot cope with the risetime and even shows low sample rate (about 25 GSa/s). The green trace is the reflectometer without SOL calibration and noise reduction, the risetimeis about 220 ps. The calibrated reflectometer output with noise reduction is slightly slower and shows pre-echo on the edge due to restricted spectrum.

The SNR is a semi-measured parameter since it uses measured noise and estimated Gaussian pulse. The resulting SNR touches 0 dB at 2.5 GHz and goes under 0 dB near 3 GHz. So, the estimated useful frequency range is about 2-2.5 GHz. 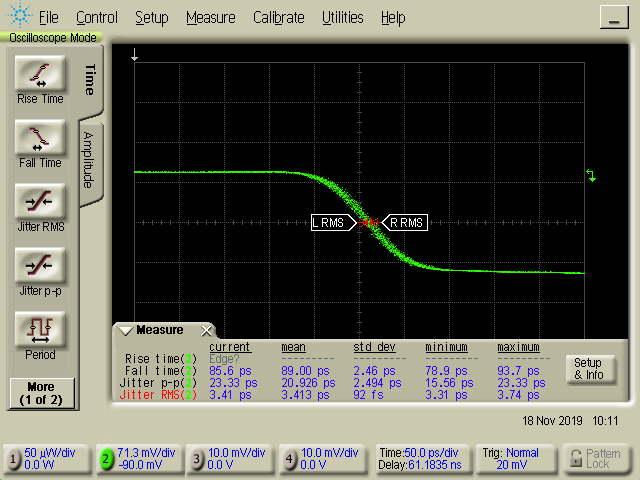 The input impedance looks quite good until 3.5 GHz. Since the working frequencies of the reflectometer are less than 3 GHz, the input match could be called as "better than -25 dB" which is extremely good. On gigher frequencies, you can see it gets really bad, mostly because of the bad footprint of the SMA connector. Also, the connector is the cheapest Chinese SMA connector ,which doesn't help much with the results. However, in the useable band, the match is quite good. Also, as you may have seen in the log about SOL calibration, the reflection is small enough to be completely suppressed by the calibration. 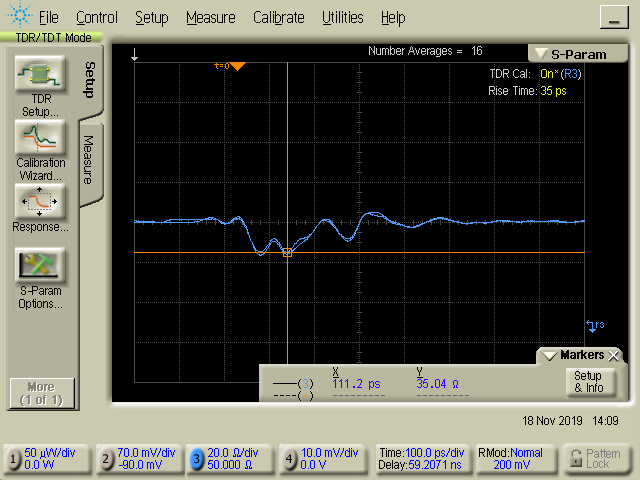 The noise reduction comprises of averaging and Wiener filtering. The result of filtering is on the next graph. It helps, but is too time-consuming and doesn't get rid of all the noise.

And with noise reduction:

The step at 68 ns happens because the original data ends there and the rest is a prediction of future events made by the Fourier transform. But I do not know why the step happens, I would expect the data to continue with the same level, just filled with noise.

The reflectometer works and it is usable from DC up to about 2 GHz (maybe slightly over that with reduced SNR). The time resolution is 20 ps and can store 4096 points. It can be calibrated as one-port VNA which removes the side effects of mismatched impedance of its input. An adaptive noise suppression algorithm was implemented.

Now, I will move onto next project. Maybe it will be two-port TDR/TDT usable as a time-domain VNA (hae to figure out the 12/16 element calibration process). Maybe it will be a two-channel oscilloscope. It will be most probably based upon designs of "loxodes", Darwin Sabanovic and Ted Yapo. All of these designs are practically the same, even with the same impractical bits here and there.

I already have a few ideas how to make the oscilloscope...

An appendix to the noise reduction which was cut too early

A goal was achieved