A PC, running both Windows10 and macOS Catalina, built in a PowerMac G5 chassis

After a year and a half of building, using and tinkering, my HackPro is finally done. I've finally fitted the SFX power supply and finished the all-important cable-management.

Over the last few years i've seen quite a few of these ATX conversions for Mac Pros and Powermac G5's. I had really wanted to attempt one myself, I just wanted to do it right. Just like my PiStation project, from the outside I wanted it to look totally stock. Since this is a PC build, I also needed the insides to look great too.

The PC hardware isnt the best, with a Skylake i5 and SATA ssds, but its perfect for me. Ive thrown an RX 5700XT for that sweet sweet Catalina compatability and 24GB of DDR4 RAM so I can open 5 tabs on chrome (also so NodeJS can eat it all for work).

Now, the fun bit. I bought the original PowerMac G5 on TradeMe for $150 NZD. I had to strip all the original components to plan my attack. Goddamn Apple loves over engineering their computers, took me a couple solid hours to strip it all out.

I had ordered an ATX Low 120 Kit from the LazerHive. It included the motherboard tray, aluminium backplate and a jug plug for power.

I popped off all the existing standoffs which interfered with the new motherboard tray (I think I removed more than whats in this photo, so just use common sense here) 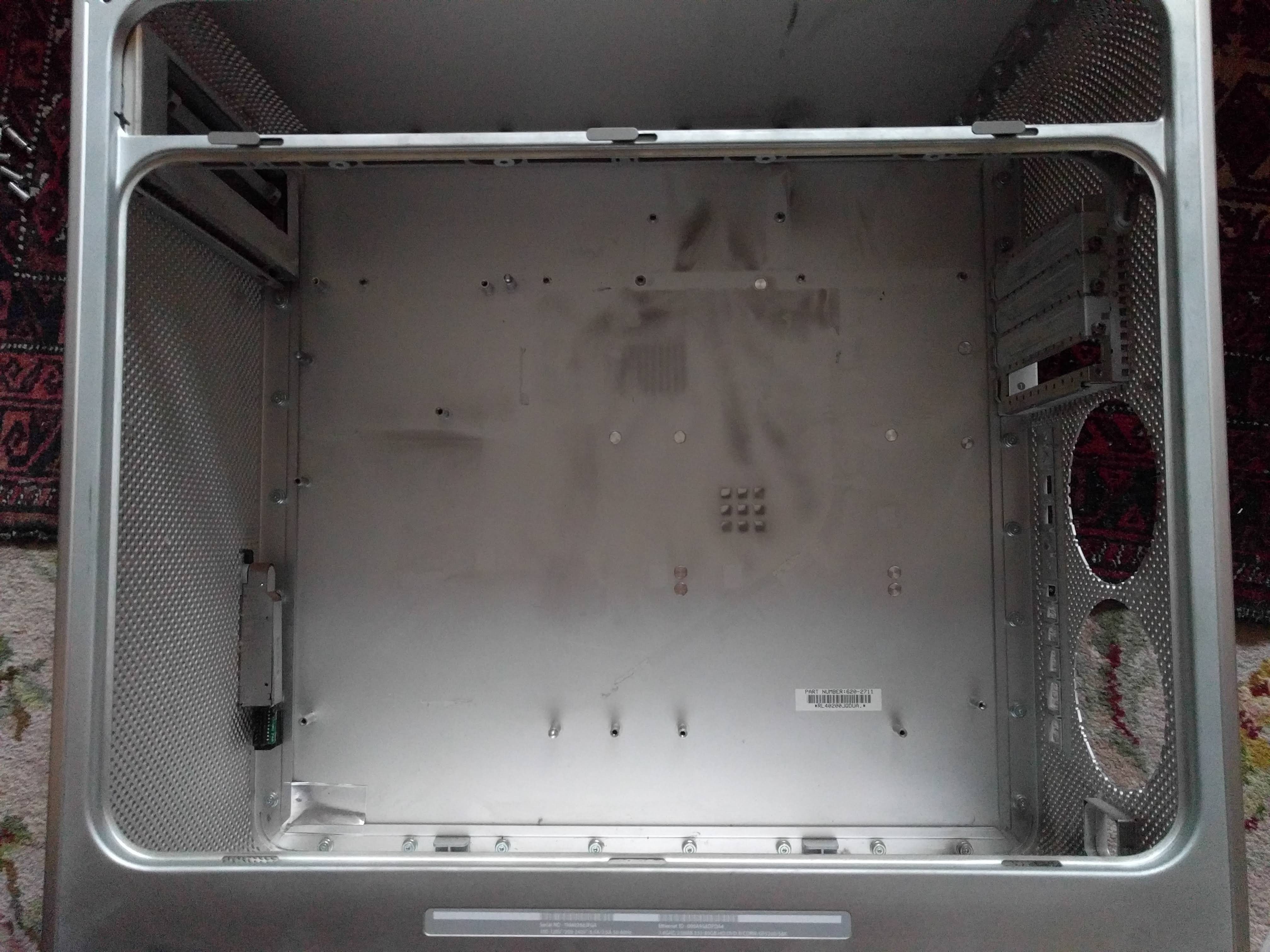 An angle grinder took care of the back and once the back plate and motherboard tray were affixed I could transplant the PC from it old case.

Now, I definitely didnt just leave it like this for 1 1/2 years. I totally got right on it and finished the project.

i exchanged the old 1070 for the 5700xt (Due to apple having a tiff with nvidia) and replaced the water cooler with the Noctua cooler due to the pump having an irritating whine.

I figured I could move the HDDs over to the left, due to no CD drive, I haven't used a CD since high school. I could then move the power supply to the top-right, running a power extension down the next to the PCIE cards and the fan.

I fabricated a bracket for the power supply, bolting it to the shelf.

This brings us to today. Its all pretty sorted, and I get to use it every day for work (macOS) and fun (windows)

I’m trying to do the same thing with mine power Mac g5 but the processor cover it’s driving me crazy how did you remove yours ?

Hah! I have an old G5 that's been gutted for years, sitting around for this exact purpose.

Oh, you've got to now :P  With the lazerHive kit, was genuinely pretty easy.

ITXBox, Putting a Computer in an XBOX Shell