A cost reduced design for an Illuminator.

The old stereo microscope that I use for building surface mount PCBs and other fine pitch work came with an incandescent illuminator that was disappointing at best. Before it could be used at all, I had to make a new illuminator. The new version used the Super Bright (for 2012) LEDs with a linear current regulator. The LED placement is OK, but could be better. I wanted better LED placement, so I designed a new illuminator that had LEDs all around the lens. My first thought was to make it all on a single piece of PCB, but the cost exceeded my desire for better lighting. Being that I only need to build 1 of these, and time is something that I have a surplus of right now, I traded ease of assembly for part fabrication time. The new design has an aluminum heat sink/mounting plate and LEDs on small PCBs and one larger PCB for the power supply.

The first iteration of this illuminator had all the parts on a single PCB which would straddle the lens of the microscope. The physical size was set by the microscope. 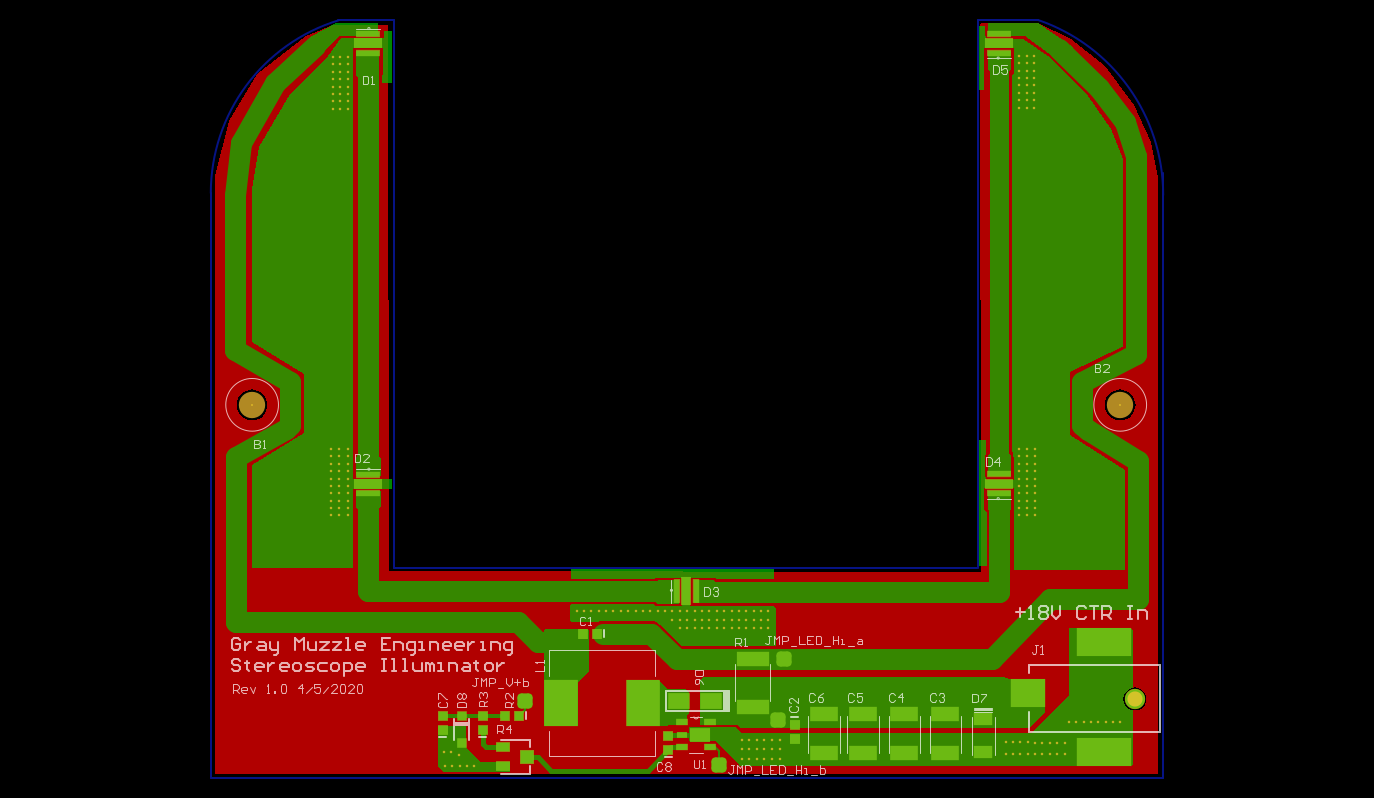 The completed design was on a 2 layer board. Fabrication costs for the board alone were a little over $80US. This exceeded my interest in the project, so I re-designed it with an aluminum plate to serve as a mount and heat sink. There are 4 small PCBs with an LED and two mounting holes on them and one larger PCB with an LED in the center and the power supply on it. It made sense to me to put the small boards on a panel with the power supply board, and cut it up before building it. The cost reduced version PCB costs were about $20US, which is a lot more acceptable.

The heat sink/mounting plate can be seen here:

It is fabricated from 1/4" aluminum, with mounting holes for the LED boards and main board tapped for machine screws. The heat sink outline was rough cut with a vertical bandsaw and then cleaned up and the holes drilled on a mill. Tapping was done by hand on the work bench.

The LEDs have a heat sink pad that runs through the middle of the package that does not have an electrical connection. This pad was tied to the ground plane. Clusters of vias can be seen around the LEDs to conduct the heat from the top of the PCB to the back side. Osram OSLON Square 3000K LEDs were used. They are capable of handling up to 1800mA, but initial tests look like under 50mA will suffice. At 250mA, this thing would give you a sun tan.

The power supply design is just a re-use of the design used previously on the goose-neck microscope illuminator shown in a previous project. Because the back side of the PCB is a solid ground sheet and needed to be flat for good contact to the heat sink, I included two jumpers in the initial design rather than going to a 4 layer PCB.

Here is the first LED illuminator that I built back in 2013.

It uses a simple linear constant current regulator. It was designed on a napkin, and worked well enough to use for 7 years. Because it was built on perf board it needed to sit on standoffs, 1/4" below the plane of the mount plate. The large LEDs stuck farther down into the work area under the microscope lense.

1800mA! that's insane. I though that was a mistake, so I checked the datasheet. And it's indeed 1800mA. You'd need some serious heatsinking when they are running at 5W each.

Clever idea to create separate panels. No need to waste FR4 when you already have an aluminum backplate.

Pretty much my reaction on the 1800mA.

My entry for the flex PCB contest. I'm not sure how well a flex PCB will work for an LED-studded möbius strip, but let's find out.
Project Owner Contributor