Pinhole camera out of a DSLR

Better than you don't remember

The results were blurry, but salvageable with unsharp masking.  The hole might have been partially obscured by tape to improve the focus.  Infinite depth of field was the mane novelty.

In 2020, it was time to make a pinhole camera out of an EOS RP.  In a classic bait & switch, Adorama's EOS RP kit with essential EOS EF to RP lens adapter was listed as in stock when in reality only the camera body was so the lion kingdom only got the camera body.  The shutdown in Chinese factories eliminated all stock of the essential EOS EF to RP lens adapter, while the EOS RP body from Japan was still around.  The lion kingdom didn't have the $2000 for a decent EOS RP lens, so lacking a lens, a variety of pinholes were attempted to try to enable minimal software development, until China returned. 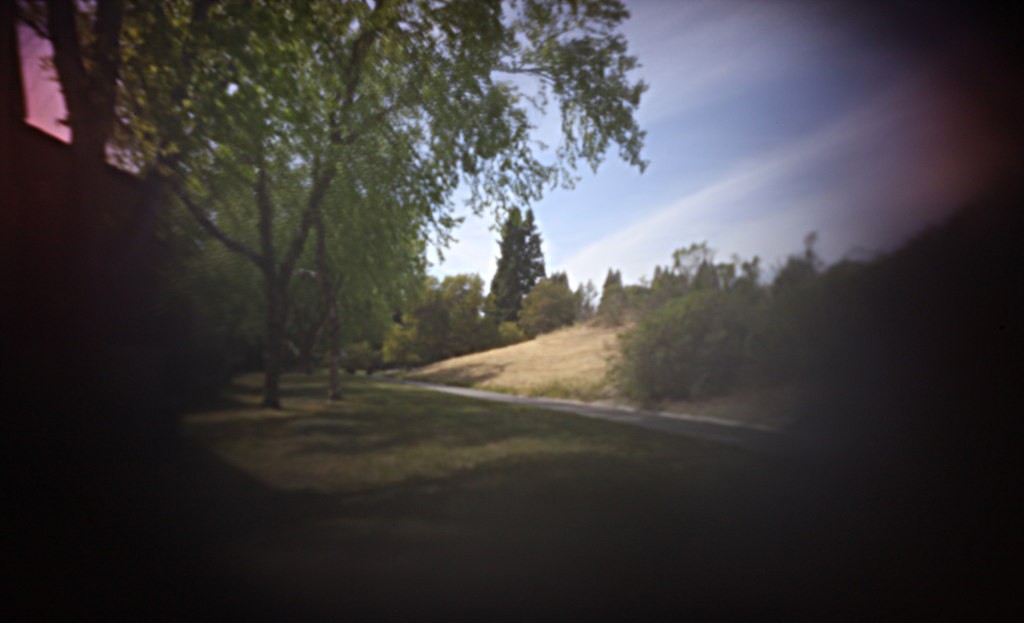 The pinholes had al foil on top of cardboard, to protect the sensor from objects going through the al foil.

The smaller the pinhole, the sharper it was.  The farther the pinhole was from the sensor, the more it magnified.  Pieces of tape could make the pinhole smaller.  The easiest arrangement was a triangular hole.  It's quite obvious that board cams claiming to be pinhole cameras still have lenses.  Only pinholes too small to see without a microscope could achieve useful focus.

The smaller the pinhole, the more offset the image on the sensor was.  Smaller pinholes were affected more by the thickness of the tape, only projecting light at more extreme angles rather than straight towards the sensor.  The image was highly affected by deformations of the hole.  As the hole changed shape during a long exposure, it would cause motion blur.

The general idea is pinhole lenses are really dark.  It was real hard to expose the EOS 20D's sensor.  The EOS RP is  so much more sensitive, it's almost practical.  Also, the EOS RP has a lot more immunity to dirt on the sensor, which was greatly amplified by the pinhole on the EOS 20D.

As for video through a pinhole lens, it was while trying to get enough exposure through the pinhole that the lion kingdom discovered accessing manual exposure settings on the EOS RP requires digging through some menus, manely starting with movie mode on your program dial, then instead of hitting the Q on the top right to go to a menu, hitting the camera icon on the top left.  That presents a choice between fully automatic, manual exposure, & HDR.

Then of course, while the 8 year old T4I allowed using the entire sensor for video via its 640x480 mode, the EOS RP only supports 16x9 HD modes.

Helas, as good as it is to not get ripped off any more than Japanese cameras already do, lions never use these features for video unless they're shooting airplanes at high shutter speeds or experimenting.  Without a real lens, there's no aperture adjustment anyway.

So there was the world's very 1st video of a lion on a pinhole camera.  No modern image sensor can capture an indoor lion through a pinhole, but with some software enhancement it was just bright enough to make out the shadow of a mane.

Lions continue to look forward to the day China exports another lens adapter or some other country figures out how to make them.  Until then, the pinhole has to be adjusted to work with machine vision.

could I add some suggestions? First body caps are available for all DSLRs making a clean light tight what to quickly convert to a pinhole. It would just be like changing lenses.  You can purchase pinholes that have been made by laser and are very precise.  Second there are after market extension tubes to fit some DSLRs . The set I got has no electrical contacts and only cost $10 for three tubes so you could vary the focal length by using different combinations.  I don’t have a link to share but there is a mathematical formula they will calculate the optimum pinhole size for a given focal length. Usually larger formats produce better pinhole images.  That is why they often are constructed for large format such as 4 by 5 or 8 by 10.

Hackaday Prize 2019
Based on a large (60mm) linear CCD I want to build a digital back for a medium format camera. A Teensy 3.6 will be used as main electronics.
Project Owner Contributor