A project log for Hotrod Ender 5's for the hackerspace.

I was intending to see how long the PTFE tubing would last in use, however I noticed quite a few improvements with my own printers when I installed capricorn tubing on my own machinei, so instead of waiting it out I decided to beat the rush, get some tubing, and set about installing it. I ordered 2 Meters and figured that would take care of both machines. In fact I had enough to do 3 Ender 5's, which is pretty cool.

There was ABS in the printer left from the previous print, and since the machine was all together my first operation was to heat the nozzle up so I wouldn't have a bad time removing anything.

I then pushed a little of the ABS through the nozzle and pulled out the filament.

Overview of the machine, we're going to be replacing the white tube going from the print head/extruder to the extruder drive in the back right of this photo.

Remove our snazzy fan shroud for now, it's going to be in the way of what we need to do next.

Loosened the nut on the compression fitting for the heatbreak/extruder, which allowed me to pull the PTFE right out and easily.

I used the old PTFE tube for 2 things: 1) To measure out how much capricorn tubing I'd need (I added 1/8" for good luck), and 2) to push out the debris inside the extruder heatbreak once I pulled the nozzle off.

The kit I got came with a tubing cutter, so I used it to cut the tubing to length, making care to keep it flush and as straight as possible.

I used a 1/4" hex nut driver to remove the nozzle for clearing, and I also used it to hold the nozzle in a good position when working with inserting the new capricorn. I inserted the capricorn's most parallel/flat end into the heatbreak, and I extended the new tubing below where it needed to be. I threaded the compression fitting on lightly and then pushed it up using the pressure of the nozzle being threaded in from underneath. I wanted to make sure the nozzle and the end of the tubing had as little of a gap as possible, and then tightened both the nozzle and the compression fitting up. I do not recommend using the included nozzle wrench with your printer, it will cause damage to your nozzles especially if they are brass. A good 6 point socket or nut driver works wonders on these nozzles.

I fed the capricorn tubing through all the existing tie wraps since I knew it was just a little smaller than the PTFE tubing that came before it, making it easy. You really should replace your tie wraps, I was just being lazy and not setting a good example here.

We picked up a couple of Raspberry Pi 4 2GB boards to use for Octoprint since all the 3B's were out of stock so long, and the project dragged on until most of the problems in Octoprint relating to the 4 were cured (YAY!)

I used the printers to make some Pi 4 cases (prior to installing the new capricorn boden tube). Clearly I am going to have to work on the cura profiles, or figure out why we're getting this much stringing. Guessing my retraction is out of whack. Still fun to see both printers are making exactly the same defects!

I downloaded OctoPi https://github.com/guysoft/OctoPi and used Etcher (https://sourceforge.net/projects/etcher.mirror/) from a windows box to install the OctpPrint image onto a 16GB MicroSD card for both machines. I edited the octopi-wpa-supplicant.txt file on the BOOT partition of the MicroSD card and uncommented the lines for the network I was going to use and the country I was in (In this case the WPA2 sections and the US country code). This allowed me to get them on the network and configure them. I should do an in depth post on that, however I did not take enough pictures or grab screenshots when I did it last night. Also we had a couple of Logitech C270 web cams laying around, so I just set those on the printer for now until we get some Pi cameras. 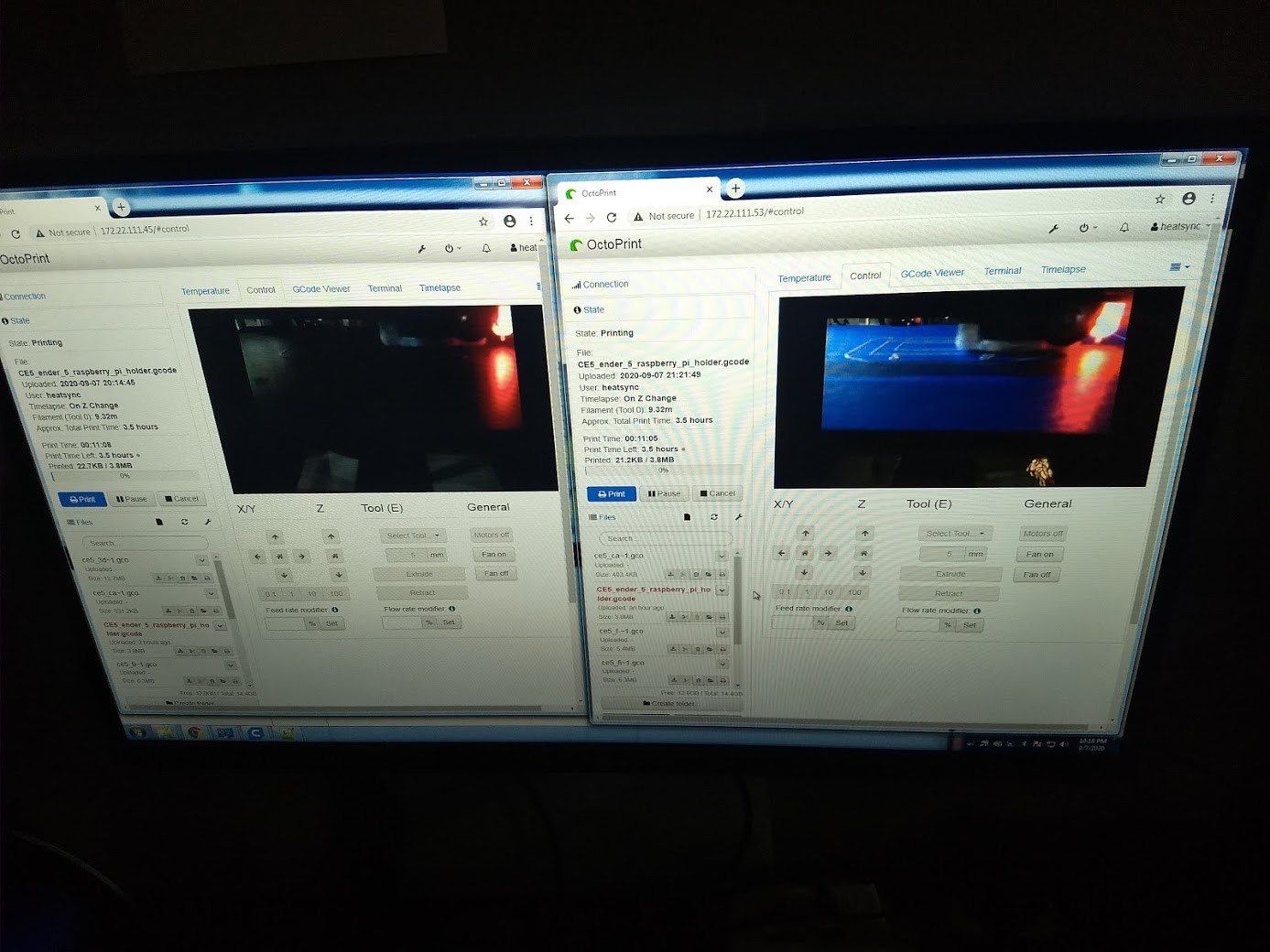