Vectron VGA generates a 640x480@60Hz 3-bit color VGA signal and is designed to interface with the Vectron 64 6502-CPU based computer.

Vectron VGA generates a 640x480@60Hz 3-bit color VGA signal and is designed to interface with the Vectron 64 6502-CPU based breadboard computer. It was built with 7400-series integrated circuits. The display is continually refreshed by the contents of a 32KB SRAM chip (1 byte per pixel) that can be updated via random access during active display operation.

The interface can also be used by other devices, such as Arduino microcontroller dev boards (example here).

The effective resolution is reduced to 160x120@60Hz, because anything higher just isn't retro enough for me. :) This also reduces the VRAM requirements and processing overhead of screen updates as an added benefit.

Frequency dividing flip-flops reduce the 25.175 MHz clock four-fold to 6.29375 MHz. This causes each pixel to be repeated 4 times on the horizontal axis. Each vertical line is also repeated 4 times to reduce the resolution to 160x120, while still generating a standard 640x480 VGA signal. The crystal oscillator and frequency divider are soldered onto perfboard -- I don't trust breadboards at that speed -- and the 6.29375 MHz signal is fed into the breadboards.

The clock drives a counter that keeps track of the current horizontal pixel position (visible region or not), and through a number of magnitude comparators and line buffers generates a horizontal sync signal and horizontal blanking periods. During the visible portion of the scan line, the current pixel position is translated into an address in a 32KB SRAM chip. The data at that address is converted to analog signals via voltage dividing resistors and sent to the red, green, and blue VGA inputs.

A vertical line counter is clocked at the end of each horizontal line. As with the horizontal counter, a number of magnitude comparators and line buffers are used to generate a vertical sync signal and vertical blanking periods.

A flip-flop and series of line buffers allow rapid toggling between "display" mode and "programming" mode for updates to the display. Each pixel can be individually addressed and updated at will via the interface. Using the interface is quite simple on the software side. For the 6502, updating a single pixel looks like this:

I also have a working example for Arduino boards here.

If you would like more details than are provided in this high-level overview, see the circuit diagram in the Media section.

You may notice some free space on a few of the breadboards. You may be able to tighten the design a bit, but I had to space things out to prevent serious electromagnetic interference issues. If any of the high speed switching lines (e.g. address and data) run parallel to one another over long distances, you'll get pixels that randomly flicker and other visual anomalies. Space things out and keep high speed lines short and it'll be a nice stable image generated. 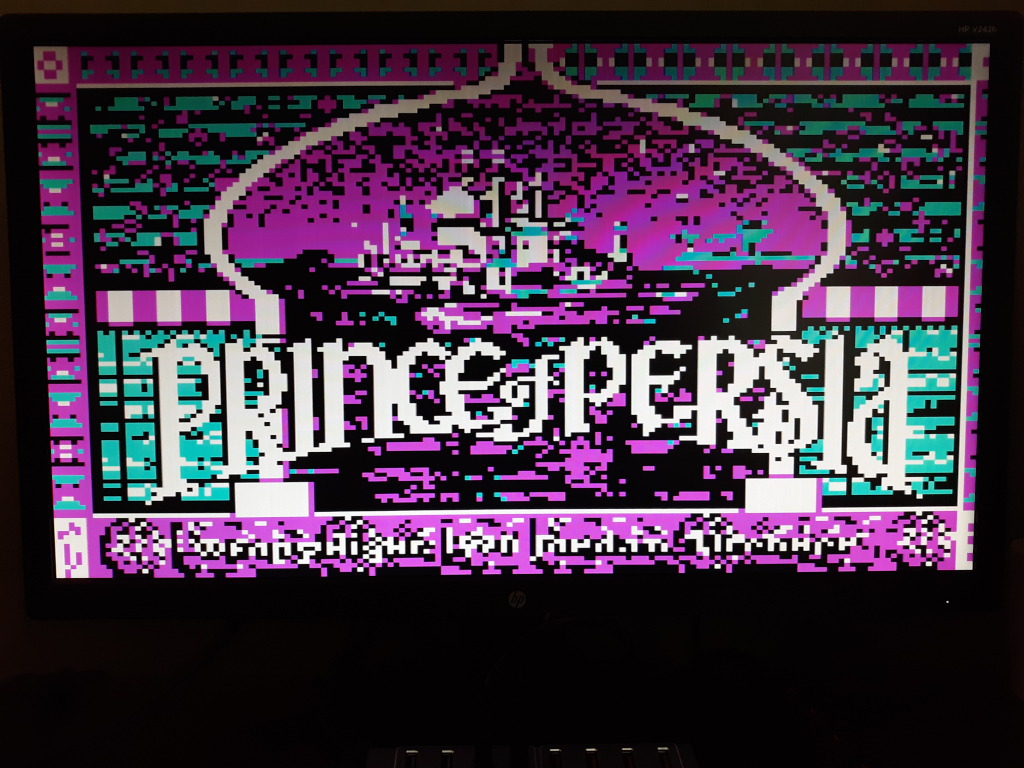 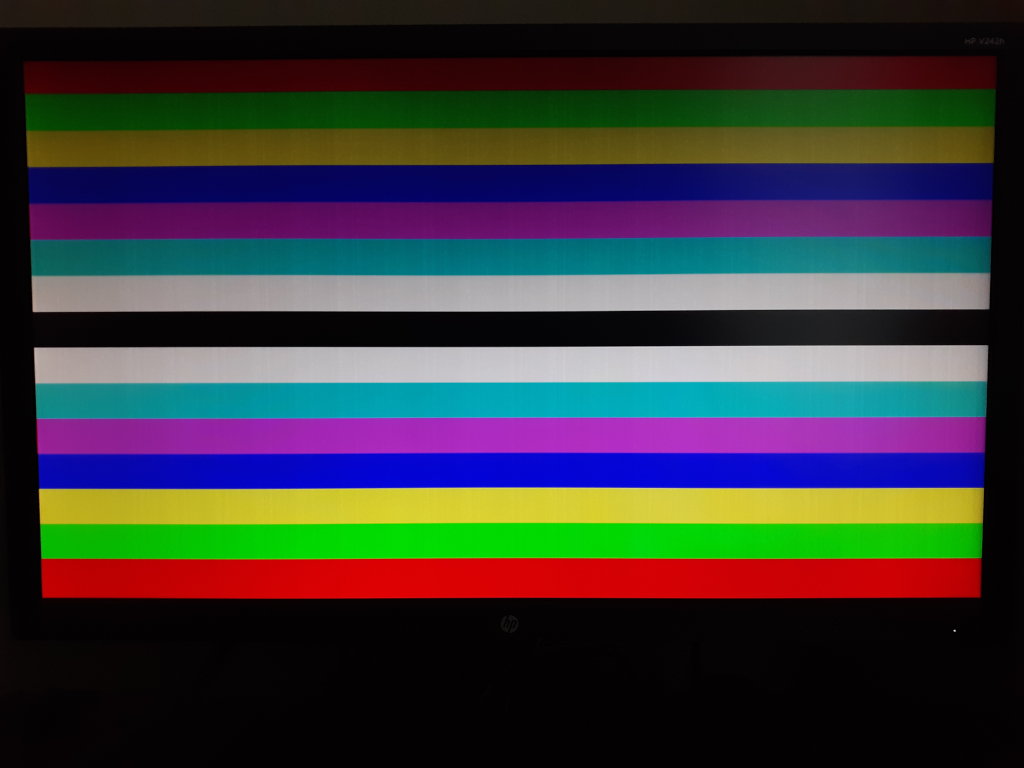 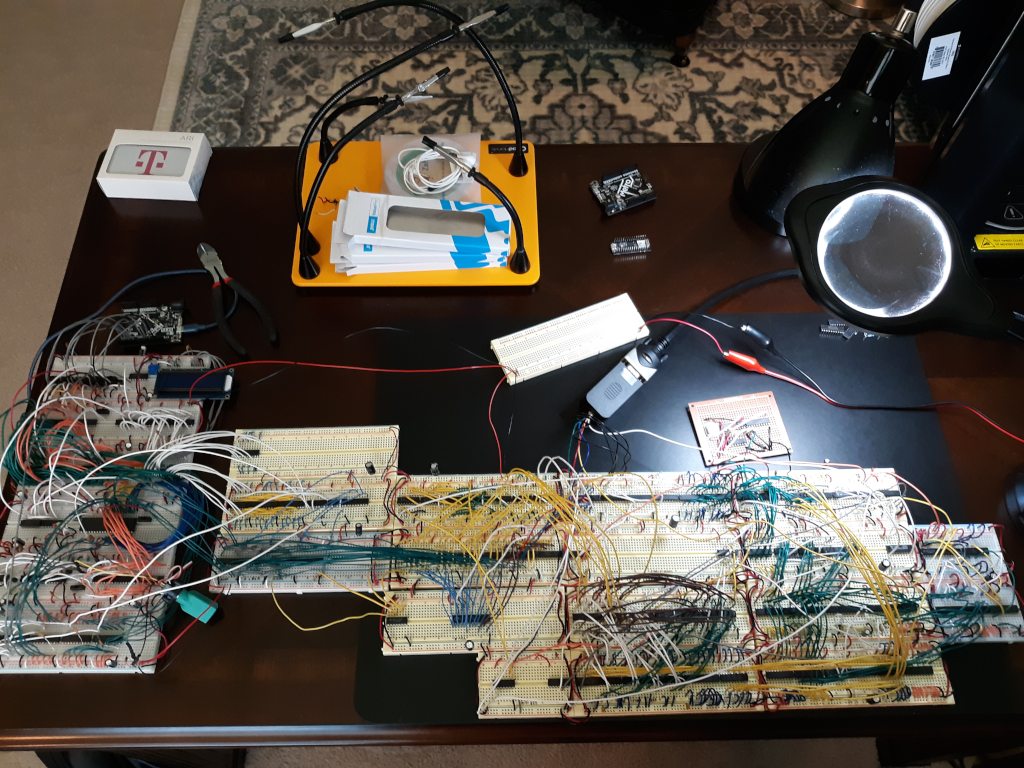 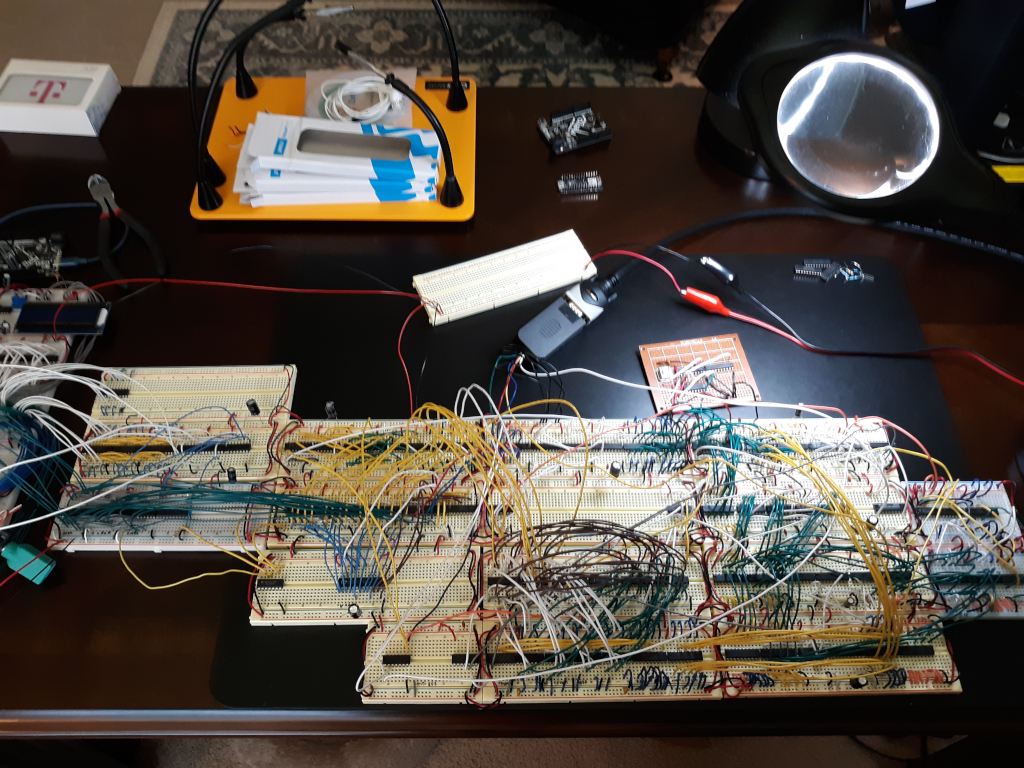