You'll create your IR Thermometer to very temperature in people.

You'll create your IR Thermometer to very temperature in people.

We are going through the biggest health crisis in recent years due to the increase in the number of cases of Coronavirus (Covid 19).

In some countries, there are not enough tests to detect the presence of the Coronavirus in people, which makes it difficult to correctly count the number of cases and impairs the decision-making of public policies such as the adoption of social isolation to stop the increase in the number of cases or Flexibilization.

One of the main symptoms of Coronavirus is an increase in body temperature above 39ºC, in addition to other symptoms such as pain in the body, difficulty in breathing.

So we need a device that is able to measure body temperature without having to come into direct contact with the person's body to avoid contamination of the device.

For this, we can use the MLX 90614 sensor. It allows the measurement of temperature without having to come into contact with the person's body, as it performs the measurement through infrared radiation.

So, just bring the sensor close to the person's body and perform the temperature measurement.

With the use of this sensor, we were able to identify the first symptoms of the presence of the Coronavirus in a possibly sick person and recommend that she see a doctor.

Based on this, you will develop a NEXTPCB Thermometer using an MLX 90614 infrared sensor with an Arduino Nano. This system will consist of an OLED display to show the temperature value and a button to activate or not the sensor reading.

Now, we will start the full presentation of the development of the Thermometer project with MLX 90614 infrared temperature sensor.

Developing The Thermometer Project With The MLX 90614 Infrared Temperature Sensor

As previously mentioned, the project consists of creating a system to monitor people's temperature using the MLX 90614 infrared temperature sensor.

In figure 1, it is possible to see the circuit mounted on the protoboard to perform the system tests. 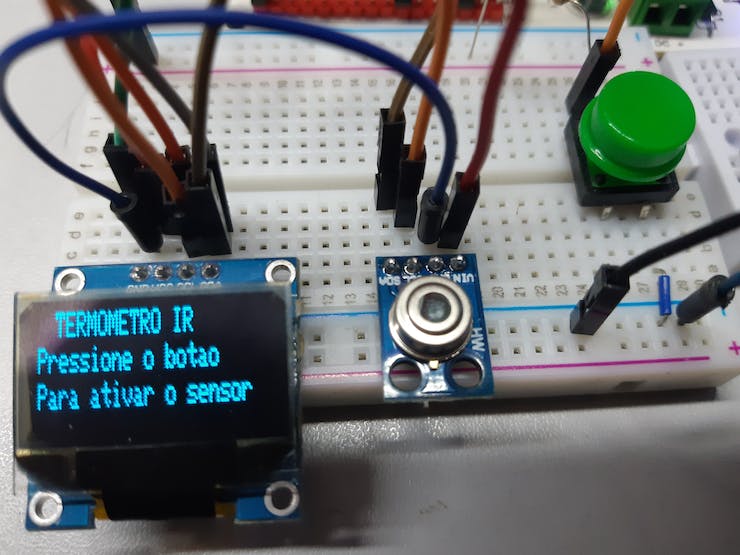 The following message appears in Portuguese on the screen "IR Thermometer - Press the button to activate the sensor".

To activate the temperature reading, you need to press the green button.

After pressing, the system is activated and the blue LED lights up as shown in figure 2. 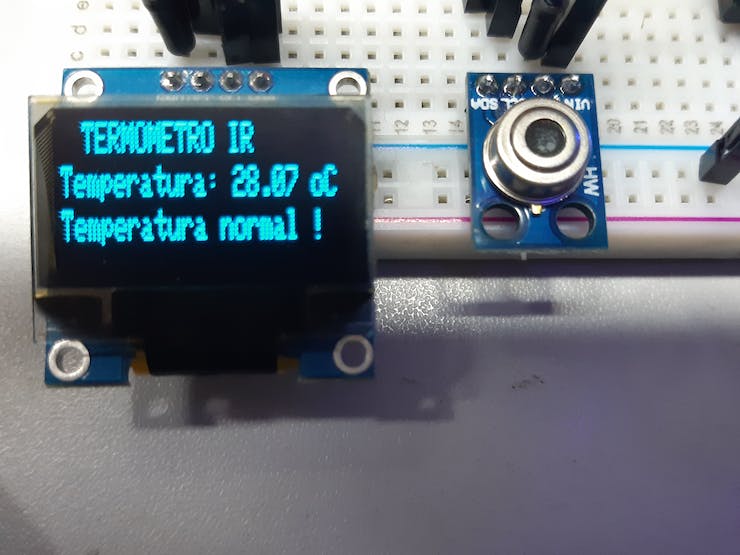 In the OLED display in figure 2, the following message appears in Portuguese "IR Thermometer - Temperature: 28.07 and Normal Temperature!".

In addition to displaying the temperature value, this system displays a message indicating whether the temperature is normal or if she needs to see a doctor. This can be seen in figure 3. 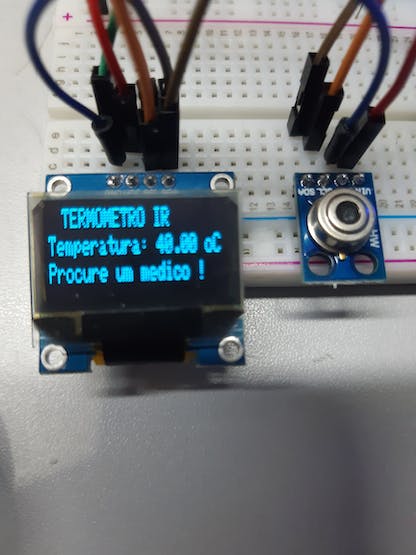 The figure above shows the following message in Portuguese "IR Thermometer - Temperature: 40.00oC and Find a doctor!"

In the figure, the system detected a temperature above 39 ºC and therefore displayed the message: Look for a doctor and switched on the red alert LED.

Now let's go to the list of electronic components needed to assemble the project.

Below, we present the electronic schematic for you to assemble this project on the protoboard.

Both the OLED display and the MLX 90614 temperature sensor uses I2C communication to communicate with the Arduino Nano.

You'll learn how to make a luxmeter with Arduino and BH1750 Module.
Project Owner Contributor

How to make a Luxmeter with Arduino and BH1750 Mod

A small device that lets work colleagues know if you'll be at your desk today so they know if they can sit there.
Project Owner Contributor

In this project, you will learn how to build a system to function as a temperature indicator for Arduino.
Project Owner Contributor