Simulating a Button Click and a New Joystick Concept

Currently, our team is in the phase of coming up with preliminary abstract ideas that we present to UCPLA for feedback.  Part of this time is spent looking for inspiration from other sources that would be helpful to implement for our project.  In this log, I want to focus on Apple's Force Touch trackpad.

In 2015, the Macbook trackpad design was completely overhauled. However to the user, nothing really changed.  in previous iterations, the trackpad was a cantilever beam design, hinged near the top and mechanical buttons near the bottom for the left and right mouse clicks. 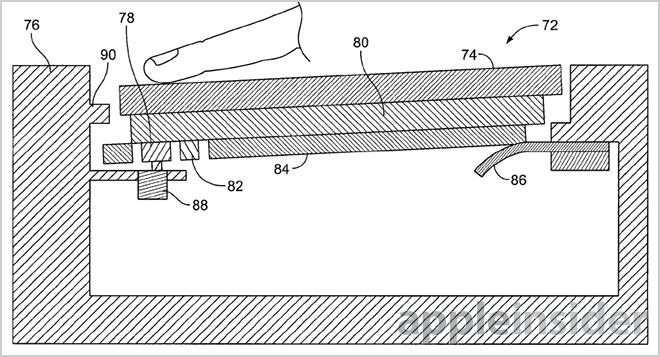 The new trackpad introduced was a stationary plate with no mechanical buttons.  At the four corners of the trackpad were 4 strain gauges that could detect the how much pressure user's were exerting on the trackpad.  Above a certain pressure threshold, the computer would process it as a mouse click.  In normal trackpads with physical buttons, there is auditory and tactile feedback from the button pressing and releasing.  The new stationary trackpad replaced this feedback sensation with what they call a "taptic engine".  The taptic engine is a vibrating motor that would activate when a user pressed hard enough and felt no different than a mechanical button.  This is a useful for a variety of reasons, which I will try to explain how it could be applicable for our context. 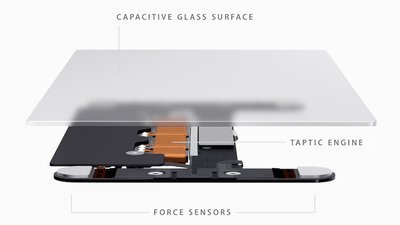 First, the force touch refers to different force thresholds that could detect how hard a user pressed.  While not moving finger position, a user could do a light press for a regular mouse click and a hard press to activate Force Touch for secondary functions.  In our context for the CP population, big buttons are often used to compensate for the lack of fine motor control, leading to large, clunky designs as seen in the remote control below.  To shrink form factor, can we have one physical button that represents three digital buttons by distinguishing between a light, medium, and hard press?  Apart from force sensing, can we use this concept using a different method?

MOVING TO A NON-MOVING DESIGN

For able bodied individuals, operating a joystick that moves provides an intuitive feedback through spatial awareness and/or joystick resistance.  Healthy individuals would have good control and can easily learn how far a joystick can be pushed in any direction.  For an individual who may suffer from tremors or have a delayed feedback response between the hand and the brain, it becomes more difficult to consistently stay within the joystick limits.  Thinking about the Macbook trackpad, would it be a more durable solution to have a 4-direction pressure sensing "joystick" that doesn't move (basically a solid object that users can comfortably grip), and replace feedback mechanisms using alternatives such as vibrating motors?

I couldn't really find any existing product that resembles this idea, so it's likely a gamble to go this direction.  Watching how individuals struggle to use existing joysticks by having to change their hand position to push in different directions makes me think  a joystick that doesn't move would help.  From discussions with UCPLA, we learned joysticks have a tendency to break., which makes me think a stationary, sturdy "joystick" would be an improvement upon current joystick controls.

Update on Our Survey: Now Open for People with ANY Physical Challenges