LEDs come in all manners of sizes, colors and brightness. To be able to choose the most appropriate ones, we need to know what are they going to be used for. For this purpose, we did some market research on UV curing glues. After checking the datasheets of 89 models of adhesives across 4 different companies, we came up with following graph:

The source of this information can be found in spreadsheet format, here.

Let’s highlight some important aspects of this dataset:

From this information we can conclude that we should ideally aim for a lamp that emits 100 mW/cm^2 @ 365nm, as this gives the project the best coverage of commercially available glues. Though as we will soon see, it is not trivial to emit light at such high intensity from a battery powered device.

SELECTING THE LEDS ON MOUSER/DIGIKEY

It turns out there are not that many high power UV LEDs available in Mouser or Digikey. Even less when you search for ones that:

We decided on the IN-C39ATOU2 from Inolux, link to the Mouser listing here.

Some highlight of the LED are:

HOW MANY LEDS DO YOU USE ?

Ideally we don’t want to use more LEDs than absolutely needed, both because of the price, and to save on battery life. Thankfully the datasheet provides us with all the information needed to run a couple of simulations and figure this out. Namely, the total power emitted as light (1.6W) and the radiance pattern, which looks like this:

No we can program a small script in Python to calculate how this beam pattern would look projected over a surface, at different heights.

From here we can see that at its peak, 6 LEDs can indeed generate the 100mW/cm^2 we were looking for, even if it just in a small point. Now let’s look at those irradiance patterns a bit more closely: 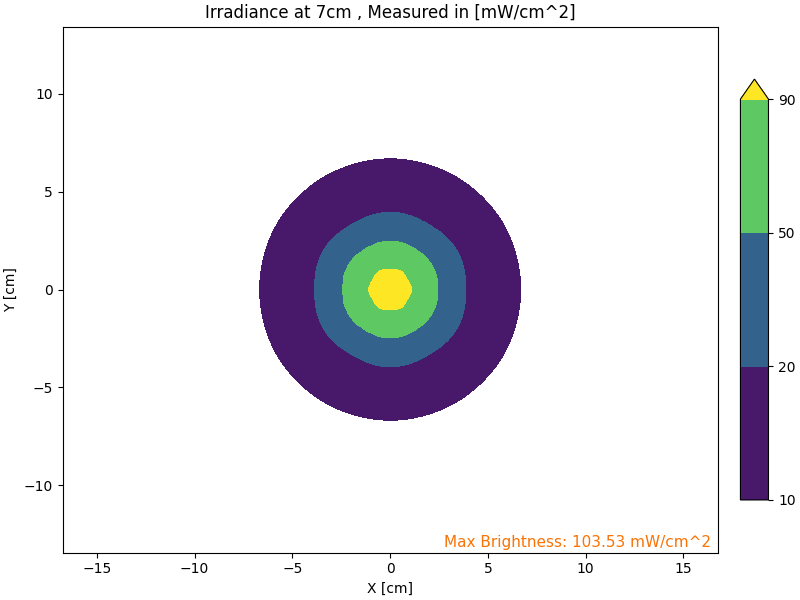 At 7cm from the target, the center of the pattern surpasses 100 mW/cm^2, and there is a circle of about 2.4cm in diameter of light above 90 mW/cm^2. Not much in terms of area, but that’s quite an impressive power density. 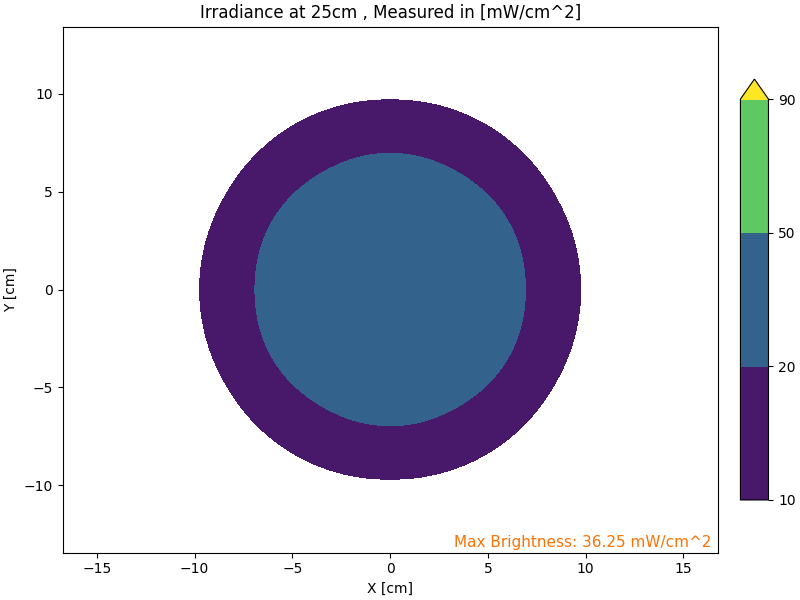 Now, if you’re working with glue that cures at lower energy levels and prefer less power over a larger area. At 25cm away, the six LEDs can generate a circle of 14cm in diameter with over 20 mW/cm^2. Which is rather respectable for a handheld battery powered device.

EXTRA:  WHY NOT USE STANDARD 5MM UV LEDS ?

Let’s explore a fair question that might be in your mind after reading this post. If you search on Amazon or Ebay right now for “UV LED” you might find about a dozen of listing like the following, selling 100 UV LEDs for just a few USD.

If this is so, then why pay almost a hundred dollars for just 6 LEDs? Why not use these? After all, they are not only exponentially cheaper, but are even more readily available. Which makes them even more inline with our search criteria. Well,

TL;DR: sadly, they just don’t work for this application.

Two main reasons for this:

Now, let’s back up this claim by running some simulations. It’s hard to find datasheets for these cheap LEDs, so instead we are going to use the data from a similar well documented LED to feed the simulation. Namely, the UV5TZ-390-30 from Bivar (Link to the Mouser listing here)

According to its datasheet, at maximum power this led can produce 40mW of light with a viewing angle of 30°. As seen below.

To give it the best possible chance we are going to simulate a 7x7 grid of LEDs, for a total of 49 emitters working at maximum power.

There we can see that even at the point of peak irradiance, this array of LEDs is just barely able to reach 10 mW/cm^2.

Therefore, as attractive as their price seems, they are not suited for this application. As even if they had the correct wavelength for UV glue curing, they don’t output enough power to be effective at this task.