Custom designed 16-bit computer with 128KB of memory (64K words) . Uses a modular design with a central bus, allowing for future extensions. The aim is to implement a full CPU with custom hardware, micro-instructions and compiler. Programs can be run from program cartridges for Harvard (or von Neumann using a program loader in EEPROM) architecture.

This has been an ongoing project for over a year before being added here, so in addition to the overall design here, I will merge everything done so far into a the first log rather than trying to separate everything as it happened.

Several years ago, there was a number of very interesting tutorial on making an 8-bit computer in breadboards produced by Ben Eater. While I had done some electronics before (mostly for school), this was my first large scale project which. With the help of these tutorials I was able to build it myself: 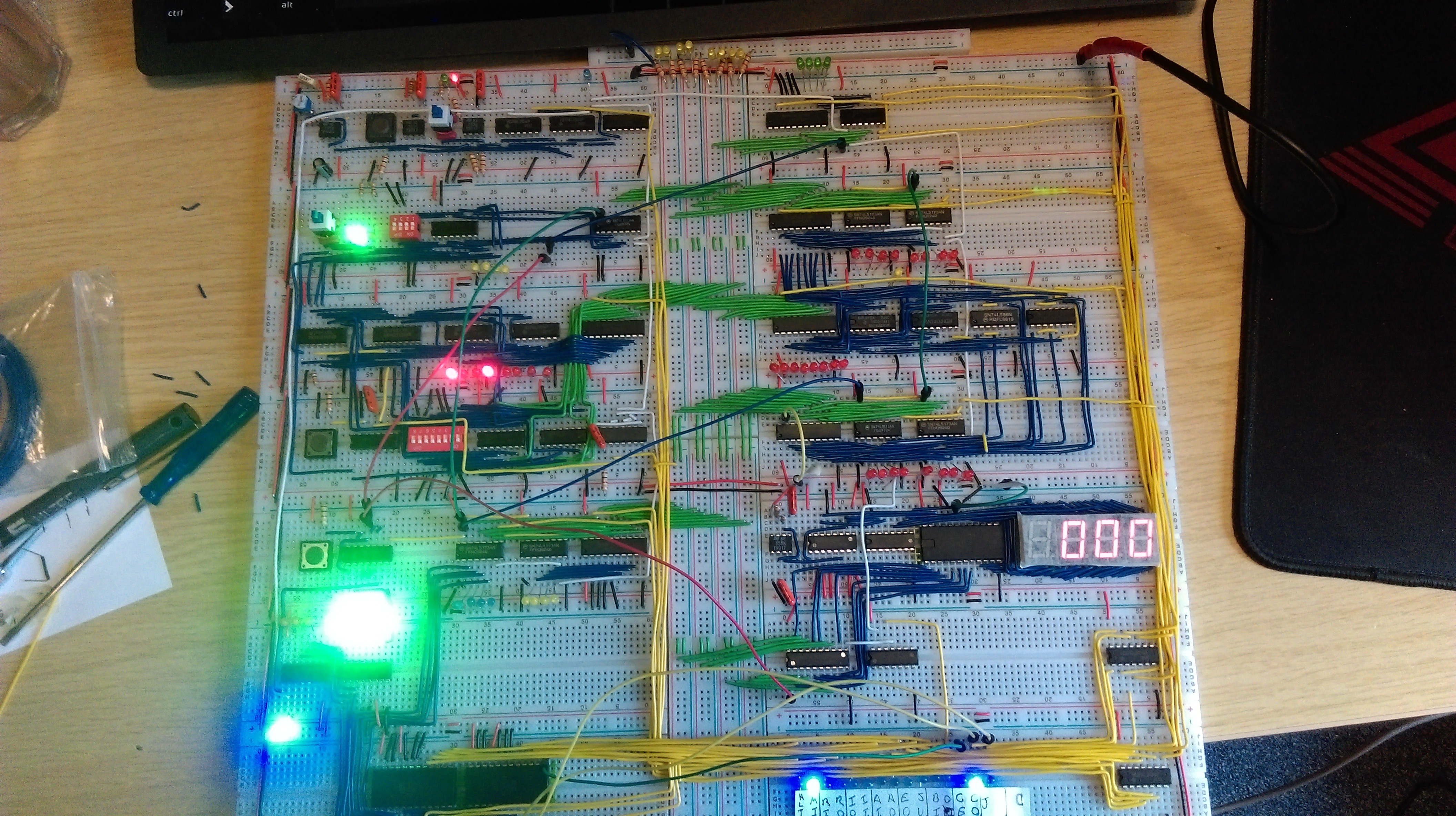 This computer uses 74LSxx chips for almost everything, with the exception being 555 timers for clocks, and AT28C16 EEPROMs as configurable logic to prevent some parts getting way to large. While I could get it running, it only has 16 bytes of memory, and to program it you need to set each byte individually. This firstly isn't much memory to do anything in, and secondly doesn't scale well even with an expanded memory. It also wasn't exactly my project as I had just followed a tutorial. As such I decided to build my own better, bigger, and as it turns out very troublesome version. There where several design considerations I set as rules:

The computer has this overall design:

ToDo: Write about choice of RAM and EEPROM, and some other design stuff (either here of in log)

With everything designed the full computer looks like this:

Unfortunately the computer isn't fully functioning. All separate modules have been tested, however the complete thing does not operate correctly. There are several problems to solve:

Thoughts and suggestions - no guarantees ;-)

"Clock does not have a fast enough slew rate" - use a schmitt trigger buffer? Especially as you mention "using a Resistor/capacitor" to decouple".

"Control logic EEPROM 4 outputs high on each bit" - sounds like somewhere you have parallel wired another output. If you disconnect the EEPROM are the lines still high (enough to llight a LED)?

"Rough control signals ... modules to not perform correctly" - You may have race conditions, ie some signal needs to arrive simultaneously with another, but one of them is transient.

"Adding a 10nF capacitor to controlines ... somewhat helps" - reinforces my racecondition suspicion. It would slow down the signal.  It also stresses the chips, as they have to supply/sink lots of current at the transition (no resistor to limit current).

"LEDs are far too bright" - have you measured voltage? They may pull down your logic high to a few volts - still enough to be a high ... some of the time. I'd buffer them (ie use a on lines where the fanout is more than 1, or at least on the bus (I have on my project)

Your use of the word "simple" is different from mine. This a complex build and very exciting. Sounds like the chip selection is kind of stopped you from getting it running but I hope you'll keep hunting for a solution.