Again this will just be a summery of the build of the computer, to get mostly up to date with the project. Mostly of the actual work was done a little over a year ago, and unfortunately I didn't take as many pictures as I should have done at the time.

The first decision was exactly how to build all the modules. Clearly PCBs are a really good option (and the one I used) but there are still choices over how to have them made. However, originally I planned on using strip-board. This seemed a reasonable upgrade over breadboards, and so I started experimenting with building a register. That resulted in this: 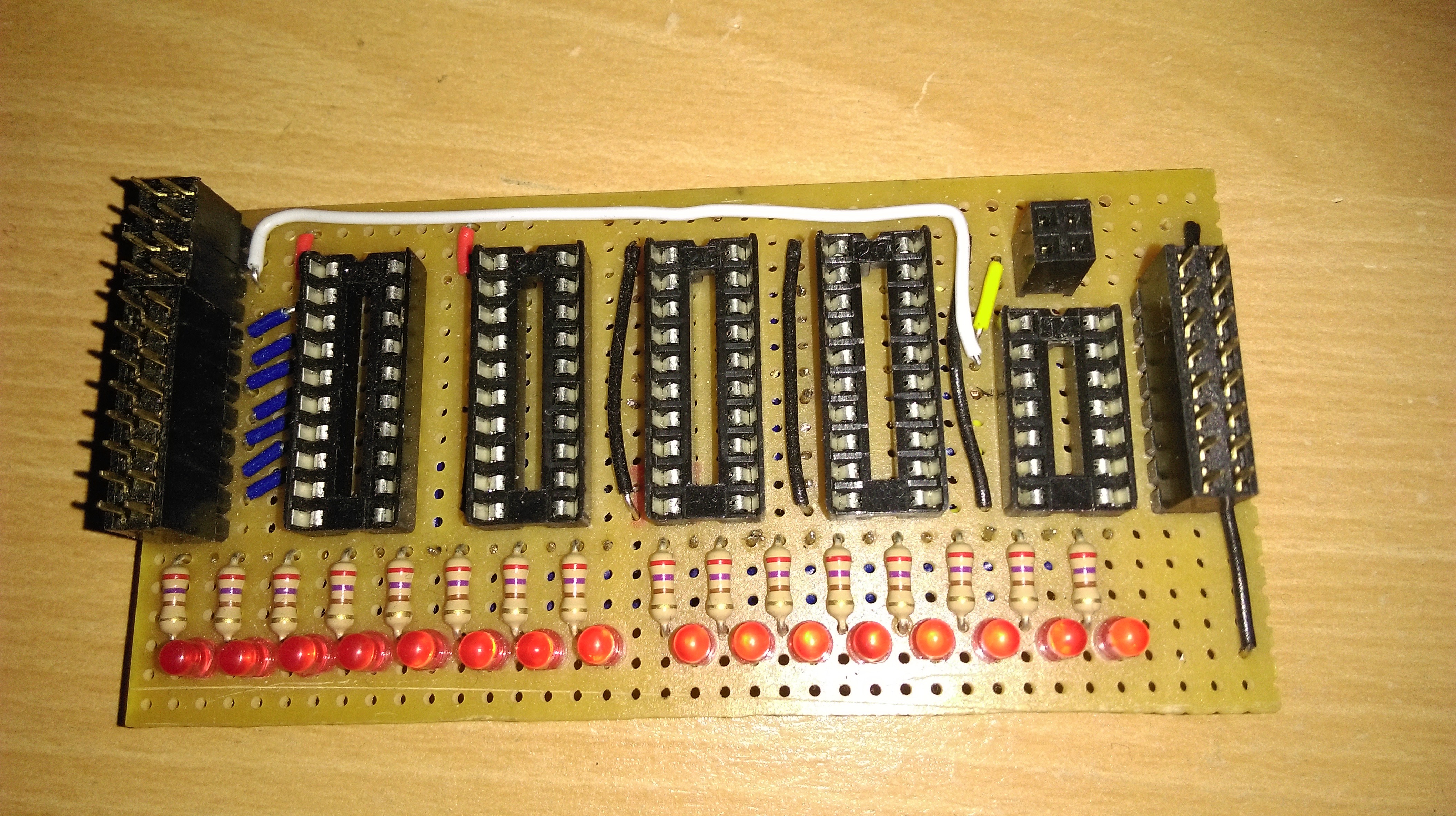 While this looks rather promising and allows for fixes and modifications when needed, there is the slight problem of the other side: 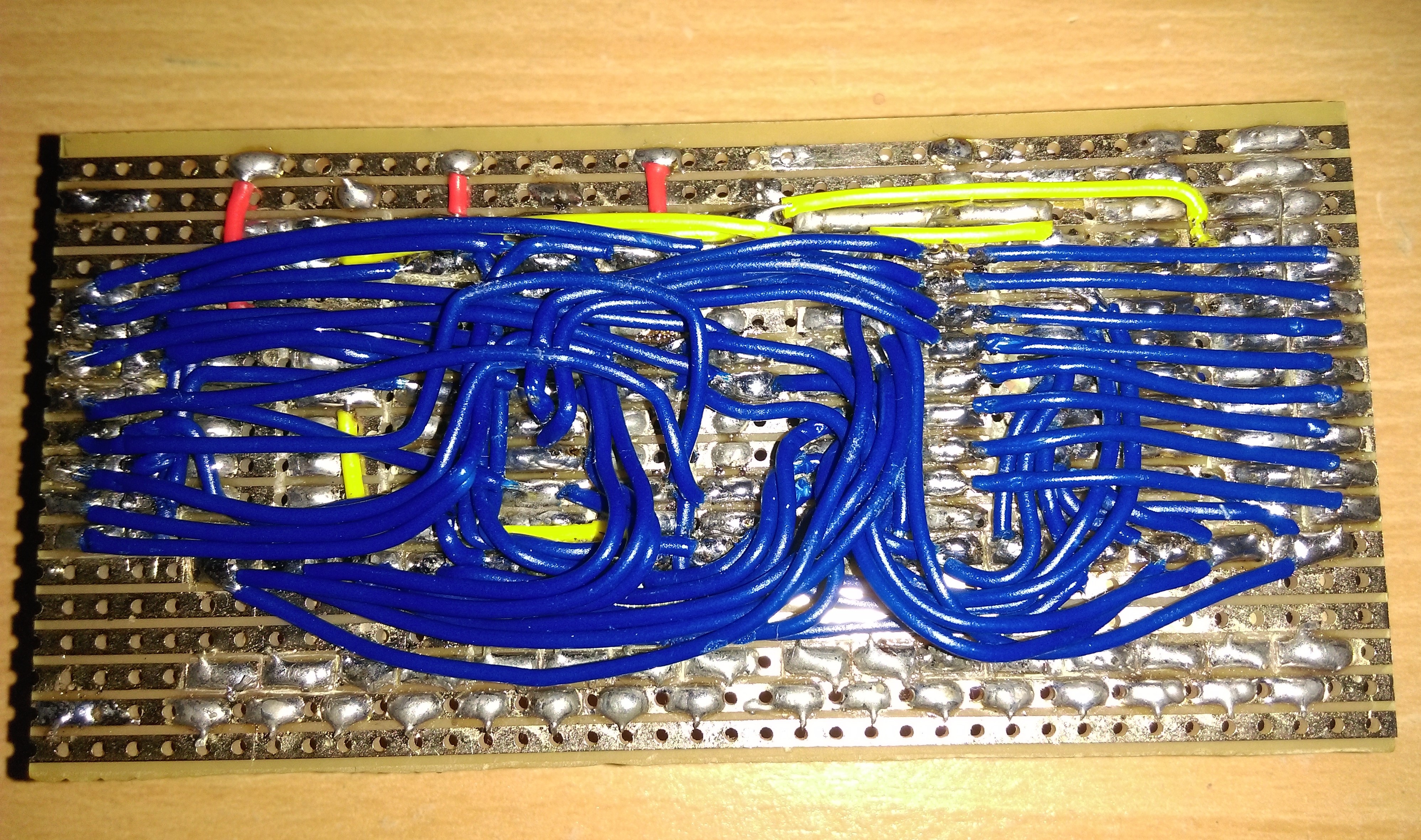 This is clearly a mess (and I'm surprised that I did so much of it before giving up). It was very tedious to build, prone to error, and extremely difficult to debug and fix. The main issue being that with 16 data lines (needing a connection from the bus connection to the flip-flops, from the flip flops to the LEDs, from the flip-flops to the bus driver, and finally from the bus driver to the bus connection), and the remaining signal and power wired: over 70 individual wires are needed, and this is one of the simpler modules. As such I gave up building the entire system in this way. There are still some parts I still decided to used strip-board. Most notably the bus as it is so large, and mostly just a lot of parallel strips (i.e. exactly what a strip-board is). As an alternative fabrication method I had an experiment with making my own PCBs. For this I tested an EEPROM programmer for the AT28C16 ICs. For this I set up a headed container of Sodium Persulfate (as its apparently cleaner and more controllable than ferric chloride) with an air bubbler. To place a mask for the copper to keep, I experimented with laser printing onto paper, placing the paper toner side down onto copper clad board, heating the lot with an iron, and then removing the paper after soaking it in water for some time (there are definitely better tutorials out there that explain this). After a couple of attempts at transferring the mask I ended up with one I was happy with, etched and added the components: 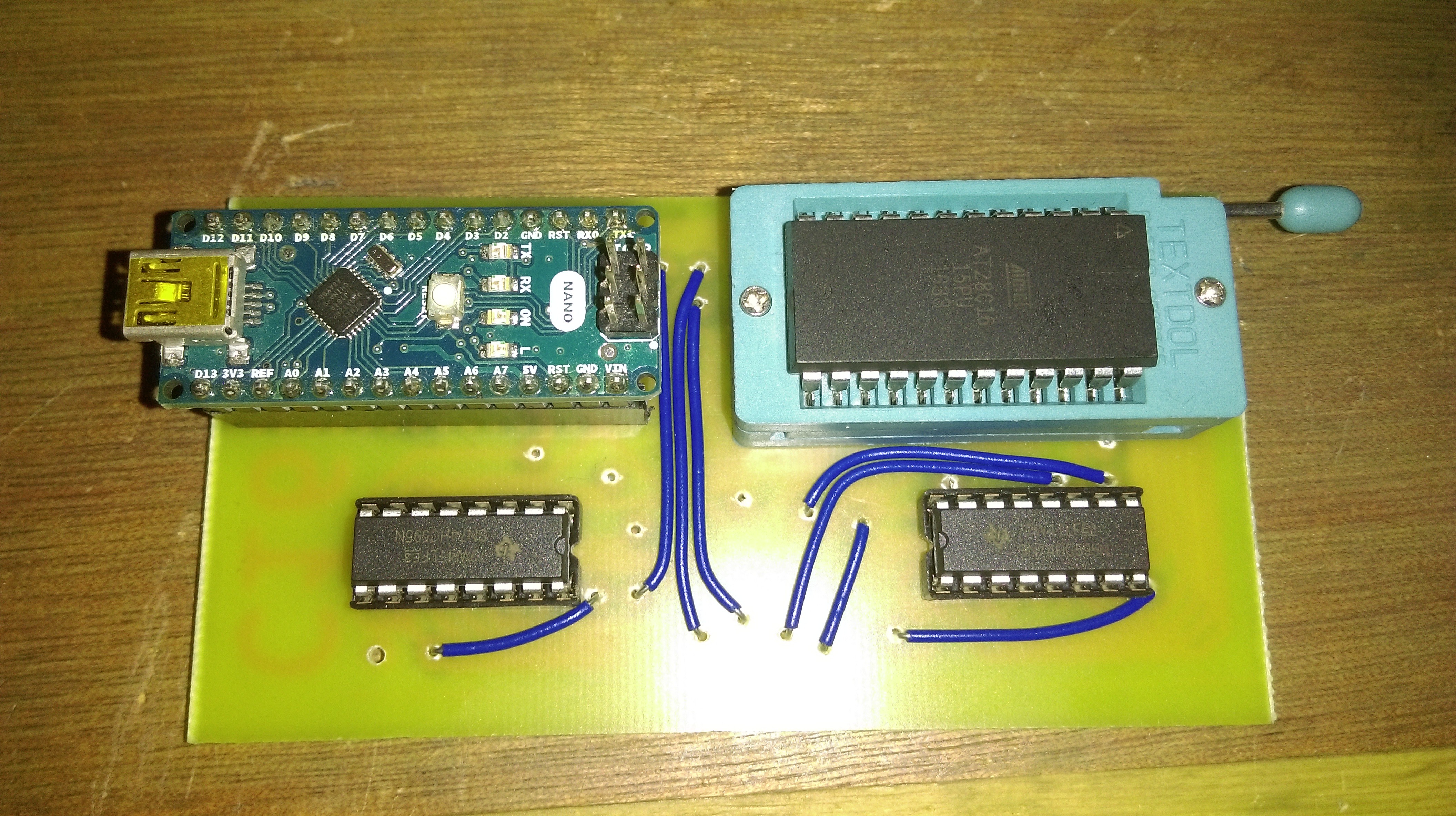 This needed a few extra wires as it is a single sided board (double sided like this sounds difficult), but this needs far fewer than on the strip-board. The other side:

To build the computer I started with a roughly 560mm x 560mm x 6mm sheet of MDF. I then sketched out in pencil some construction lines before adding mounting points which the PCBs can clip onto. These have an M3 bolt going through the MDF into the post , so require some fairly well placed holes, based on each PCB. To make sure they where all lined up, I could hold each PCB over the correct place and make a pencil mark for where to drill holes. Overall I am very happy with this method of holding everything together, although maybe I should have used mounting posts where screw help the PCBs in rather than clips, so that they are easier to remove. Also I might paint the MDF at some point, but for now I will wait to everything is working. Soldering everything together was pretty simple (although the LEDs and their resistors took a while). I also tried to test all the modules separately as thoroughly as possible  before putting it all together. This got me to this state: 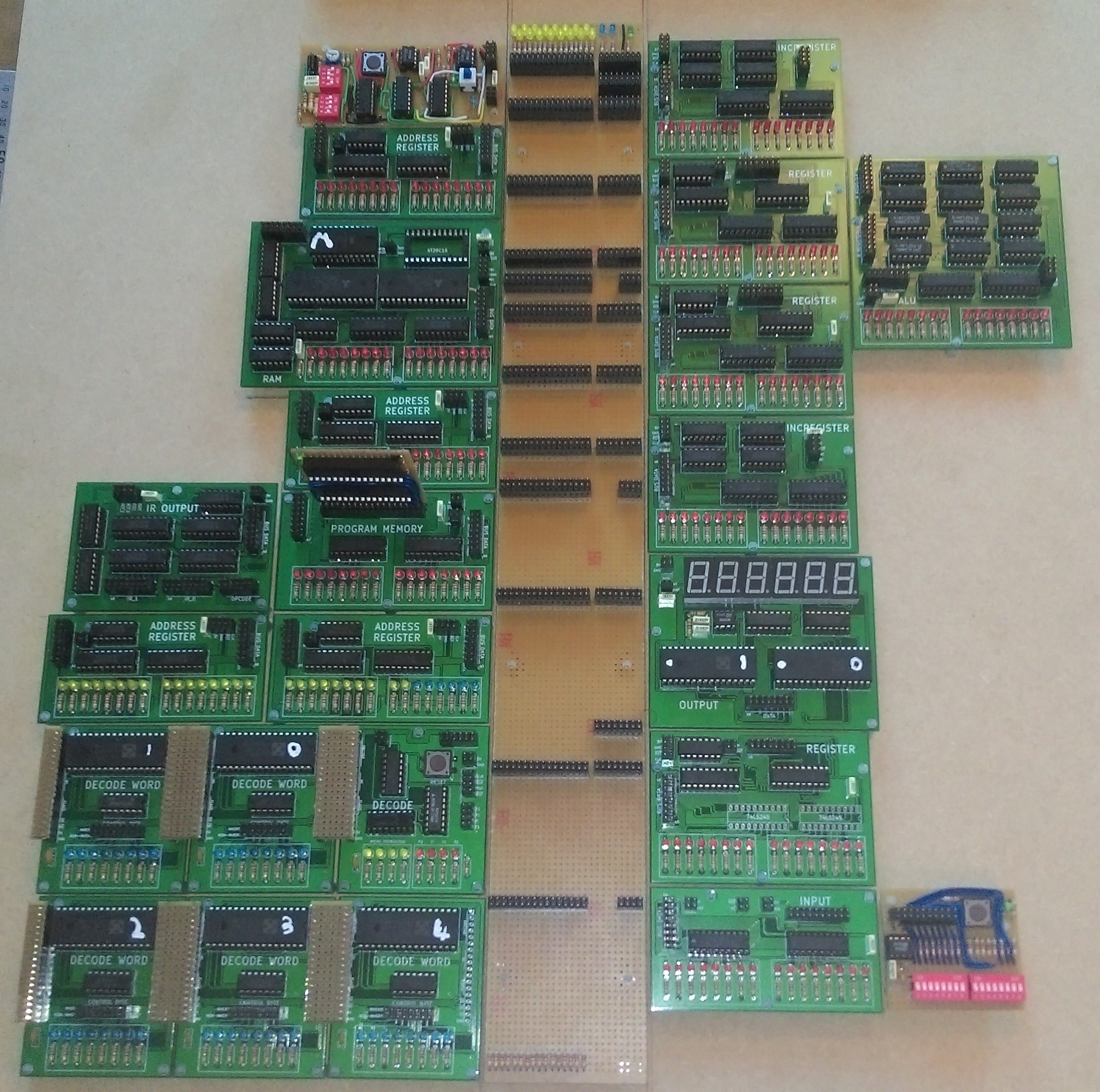 Finally, I needed to wire it all together. To make things look vaguely nice, my plan was to solder small pieces of strip-board onto header pins to make a more easily solderable connector, and then use solid core wire to connect them together: