This circuit would not AC Transfer Analysis properly. So I have to take the Positive Feedback Factor for granted.

Here Kenneth has differenced the signal and the notch to get a band-pass. In its current form this is tricky without matched transistors for U4.


And the oscillator version:

It is a little difficult to see but the oscillator version is a schmitt trigger so not really suitable for my application. This style of oscillator seems to be a last resort to get the network oscillating.

The band-pass seems to be the way to go. Here is a transistor concept: 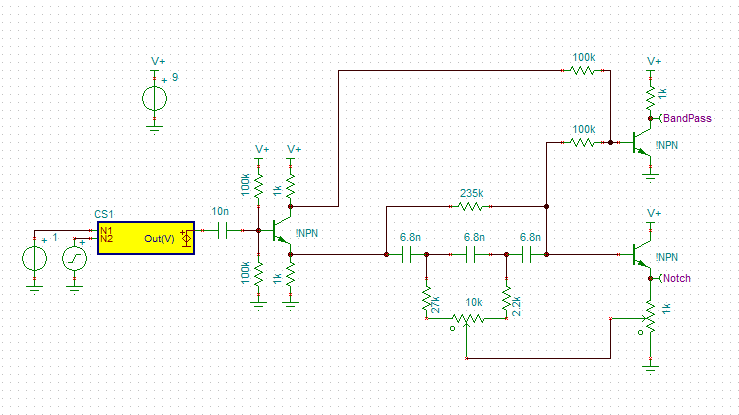 Again the circuit would not AC Transfer Analysis properly so I don't see the benefit of the Q Multiplier.

A transistor concept by the way means its lucky to even work!

The above circuit looks a little like a state variable or biquad filter:

The thought of using a MFB filter did cross my mind (R3 changes frequency while gain and bandwidth remains constant):

The GBW for a state variable and/or biquad filter is 3*Q (I think).

The biquad looks promising as the frequency is can be tuned by changing one or both RF resistors AND the Bandwidth (not Q) is constant AND the gain is constant. The properties I was trying to extract from the Hall network.

The first two OpAmps in the biquad are easy to convert to a transistor design, the integrator (the third OpAmp) needs some more thought (split power supply perhaps?).

But I don't know the GBW requirements.

I designed this transistor biquad filter: 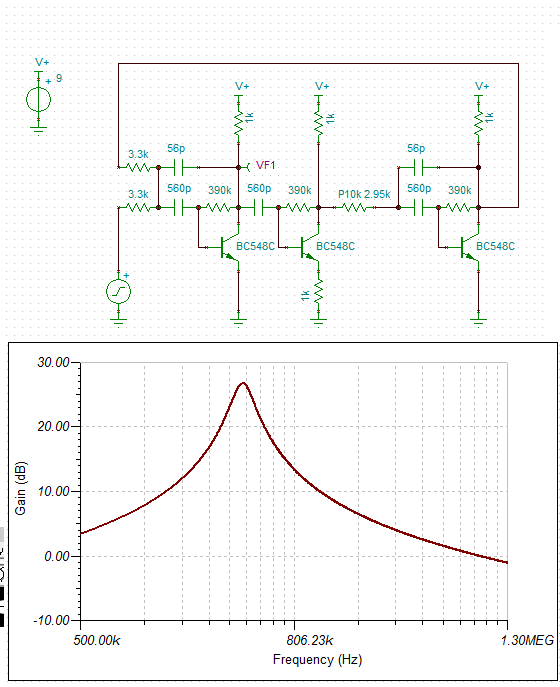 Because my simple transistor makes a pretty bad OpAmp (i.e. input impedance is about 700R), the Q is limited but otherwise it work really well. The Q at 720 kHz is about 20. The simulation suggests some instability (oscillation) at >1.3 MHz for low potentiometer resistor values.

I have had a long play with various transistor configurations but have not made any real progress on the hall bandpass or biquad design. Although the following design has a higher input impedance, the circuit oscillates in the middle of the MW band:

I am stuck! Perhaps I have lost my way.

The VFO could be a TwinT or Wien Bridge oscillator.

I have to have a think about what I am trying to do here!

I found the source of the above diode mixer. It is called the RA2AAE or Polyakov mixer.

It conducts on the peak of the positive and negative swings. A 50% on/off is ideal. Therefore the local oscillator (LO) is half the RF frequency. Obviously the LO power (pp voltage) needs to be correct. The RF choke on the input can be replaced with a ~500R resistor.

So add a Wien Bridge oscillator and a high gain AF amplifier and I have a radio receiver.

Here is another schematic from the Internet: 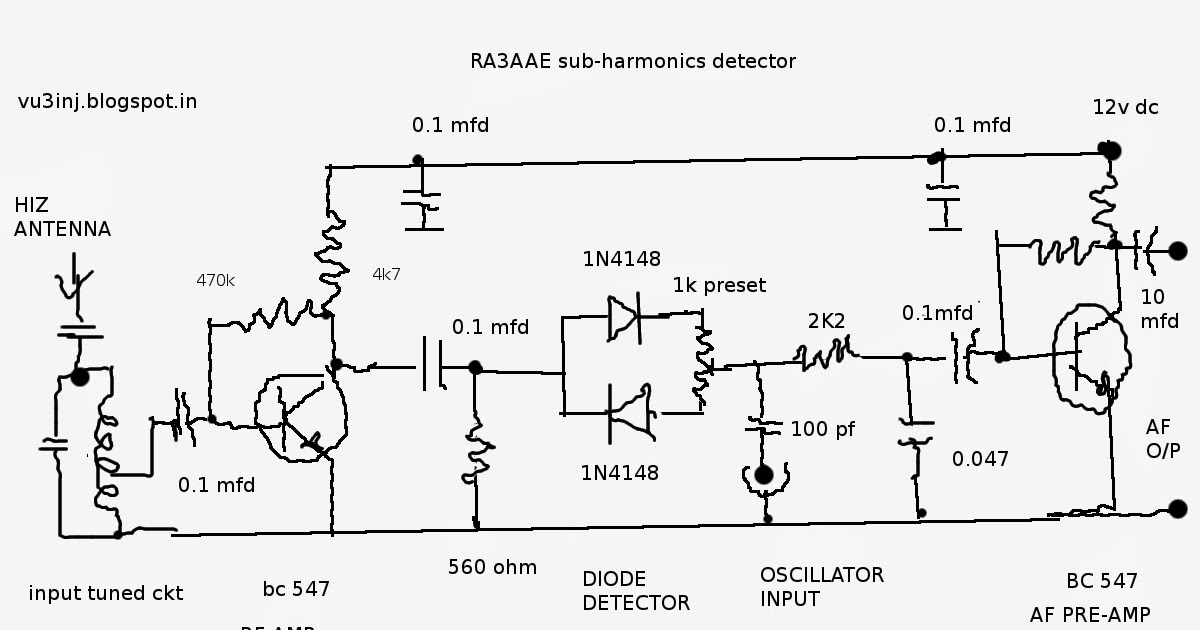 And the final version of the one above: 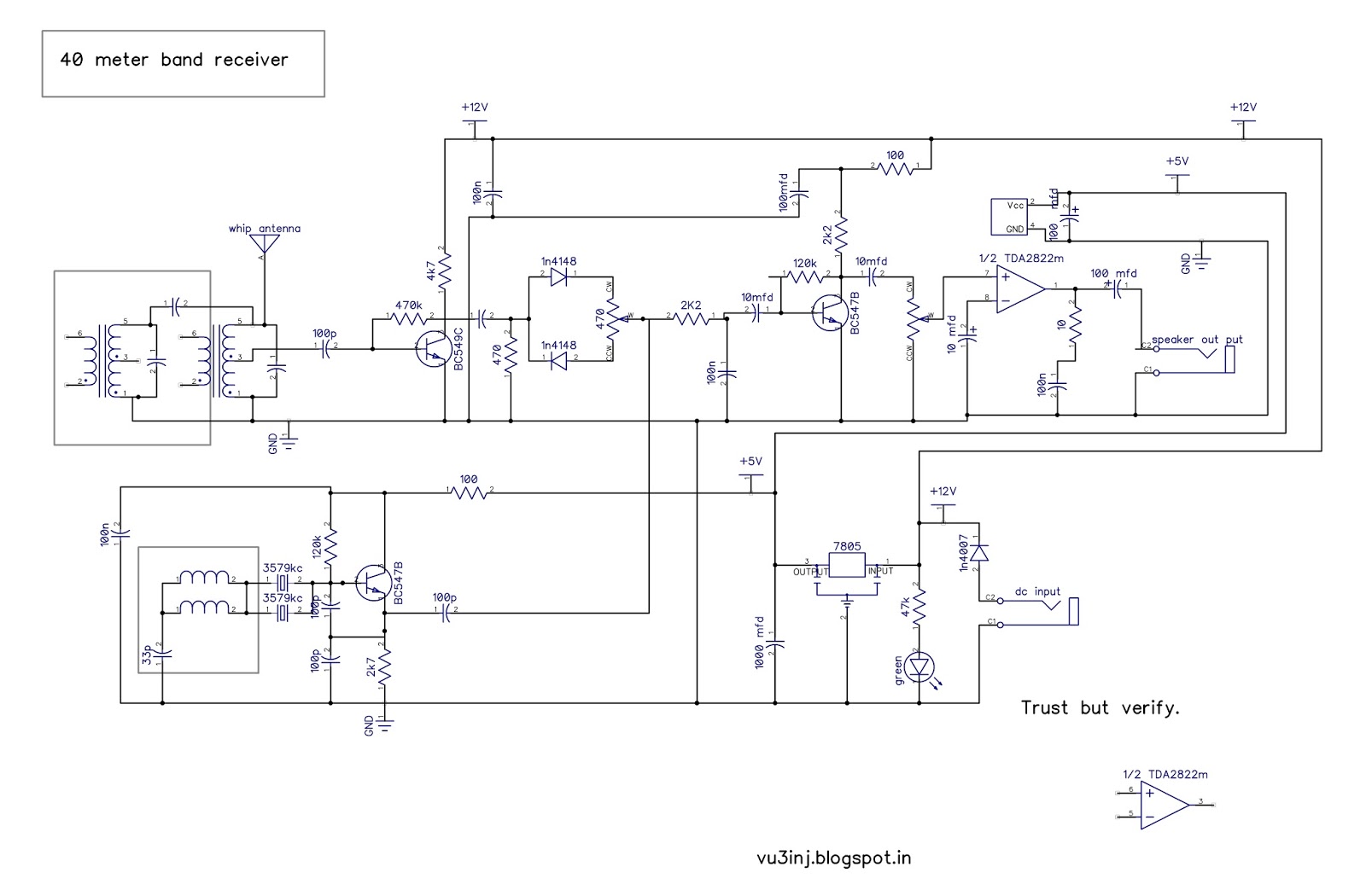 I came across this phase shift RC receiver that is about 90% of what I was looking for:

The oscillator is apparently modulated but the input signale thus envelope detection is used.

I suspect that the conventional RC phase shift oscillator would work just as well: Minimum gain for oscillation in 29 (if Ce is omitted then Rc/Re>29).

Now if you don't need a wide tuning range then a single variable potentiometer is all that is required.