Yet another place where I store the data gathered while rediscovering a century-old technology.

Playing with relays is not enough, old electromechanical phones embed pretty nice tricks that I'd like to understand and harness for future projects :-)
So this project is mostly a dump of the data I collect.

In 2014, Simon Winder made a fully electro-mechanical square root calculator : 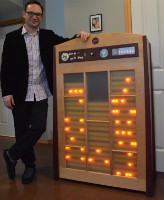 The number input uses a rotary phone dial. Then recently I found an oooold phone in the recycling zone :

Unfortunately the poor puppy is FUBAR and the dial isn't reliable... So off to eBay and for 16€ I get a cheap Ericsson-made French model ("SOCOTEL n°24" ?) from about 1978 it seems. Here is how it looks under the hood:

Apart from the cut cord, the whole thing looks well preserved, in working order, easily serviceable, and provides a powerful ring system in addition to the dial !

Today I want to use that type of interface for some of my projects :-) The principles are explained in a bunch of videos and pages, such as :

So the principle is very simple, with 2 contacts to manage :

But there are a few subtleties to get right before going further.

I used to love fooling around with old telephones. Those things were built like tanks! Glad you're keeping the flame alive, as it were.

Legend claims I disassembled my first phone at age 5 or 6... I barely remember it though but it's not far from it :-)

And yes these were great machines ! They look so tame and simple to me, now.

The 2017 Hackaday Prize
Learn about RC networks, charge pumps and more while playing the worst game ever on a 'scope!
Project Owner Contributor

QCW Tesla coils have been something of a complex mystery since their creation...until now!
Project Owner Contributor