I'm designing a light that will glow continuously for 25 years on a single battery (2 AA cells). This, of course, exposes a host of issues that I don't typically consider in my projects, so most of the work will be thinking through all the what-if's.

This is obviously a spin-off from TritiLED, but with different end-goals. The basic idea is the same, though: the technology in today's batteries (LiFeS2), ultra-efficient LEDs (InGaN), and low-power microcontrollers (PIC) enable LED markers with run-times measured in years or decades. Based primarily on the 20-year (95%) shelf-life of Energizer's lithium AA batteries, I've chosen 25 years as a design goal for this project.

I'm 47 years old as I write this. If these lamps actually run for 25 years, I'll be 72 when I can finally claim victory (maybe I should design a 50-year version instead). Just in case, I'll be giving one to each of my children so they can see if it worked.

A lot of the fundamental design for this project has already been done on #TritiLED - the basics of driving LEDs with peak efficiency pulses and aggressively sleeping the microcontroller to bring the current draw down to uA levels have been proven. What remains to be done is a thorough analysis of all the ways such a system could fail, and what can be done about it. I'm going to keep a table of all the identified failure modes here, and I'm asking for your help - when you think of anything I've missed, please comment and let me know! In the build logs, I'll discuss some of these issues and possible solutions. I'd ideally like to have a few units running by January 1, 2017.

I'm also going to have a look at the available NASA resources to see what advice they have on building ultra-reliable systems. If anyone has good links to this or other relevant information, please post them.


What Could Possibly Go Wrong?

It is exceedingly difficult to make predictions, particularly about the future.

I'll be updating this table as issues are identified (entries are in no particular order):

So the TritiLED does 5-10-or even 20 years(blinking) on a cr2032 235mA cell. You are saying your calculating ~25 years on two energiser lithium ultimate cells with 2900mAH. Of course there will be brightness difference, flashing freq/cont-on. What is the preformance difference between your circuit and the TritiLED (when yours is consuming ~10x the power)? TIA!  PS, still looking for a link to buy the pic your using to build one.

I would think the first component to let go is the LED, the repetitive inductor kick without a current limit resistor "might" have a high'ish voltage (being clamped by the LED) or peak current. It would be interesting to remove the LED and see what the incutor kick voltage gets up to, then we know what the LED is seeing. Second component would be the FET (although the LED is absorbing the CEMF off the inductor, so should be OK, but I think it would go before the PIC. I was going to build one, where are you buying your PIC from (link)? TIA. EDIT: I put together the fet and 1mH ind, with 3V input, and a 10us pulse I am seeing +65V on the FET, clearly the FET is avalanching and clamping the CEMF voltage. In normal operation every pulse is beating the LED with high voltage, so I am pretty sure the LED would be the first to go.

Great project; just discovered this and your TritiLED work while researching for a similar sort of thing I'm working on.

One question: do you find the paralleled PIC outputs provide clean enough gate drive for the MOSFET? In the first iteration of my project (using ATMega 328P MCU) I'm using a v simple discrete gate drive with just a couple of transistors in push/pull totem pole configuration. I'd not considered paralleling outputs; I may try it to see how switching speed compares.

Thanks for the inspiration!

Ultra-low power stuff like this really geeks me out for some reason. Maybe it's the emphasis on finesse as opposed to MOAR POWAH!!! that can be seen in some other projects using excessive hardware.

I don't think you need to worry about the reliability difference between SMD and through hole. I used to work in the testing lab of Nexteer, a Tier 1 automotive supplier that makes electric power steering. Those boards were all SMD, and in the lab we put them through far more abuse than your circuit will ever see. Some of these boards were mounted on the steering rack, so we had to make sure they could survive humidity, temperature cycling, thermal shock, vibration, and mechanical shock.

I don't know if there's any special layout or soldering technique used for automotive stuff, but if SMD's good enough for steering I think it'll be good enough for your light. Unfortunately I can't offer you any inside knowledge since I was just a lab tech and not an engineer.

Regarding the 12LF1571 FLASH retention - it is there in datasheet http://ww1.microchip.com/downloads/en/DeviceDoc/40001723D.pdf on page 269, parameter D124, specified as 40 years typical - at standard operating conditions, ie. up to 85degC or 125degC respectively. I expect operating at room temperatures or lower than that (less than 30degC, say) will add one order of magnitude to this number.

Since the days when OTP made of EPROM cells are mostly forgotten, you don't need to distinguish between development (verification at single VDD voltage) and production programmer (verification at multiple VDD levels, because EPROM is just analog circuit, after all), programming specs. are the same. The only difference between programmers in FLASH days is perhaps the ruggedness.

Thanks!  I think they used to put the 40-year number right in the bullet points at the top of the sheet; I guess it's too crowded with peripherals up there now...

I'm going to assume fairly constant room-temperature operation (mostly for the battery's sake).  It's less of a practical light than a long-term experiment.

I was actually going to ask you about the devel/prod programmer distinction - I've been eyeing your programmer projects so that people wanting to build some of my stuff don't have to buy a PICkit.

Im not sure the batteries themselves would last 25 years... The chemicals inside them would dry up or corrode on their own long before they finish using up there available power... But this is a cool idea.

Based on all the problems I've had with carbon-zinc and alkaline cells over the years, I would tend to agree with you, except that LiFeS2 cells are a different beast entirely.  The datasheet:

specifies a 20-year shelf life (and I have a package of them on my desk with a 2036 date code).  Looking into it a bit more, Energizer's applications manual:

shows about 95% remaining capacity at 20 years: 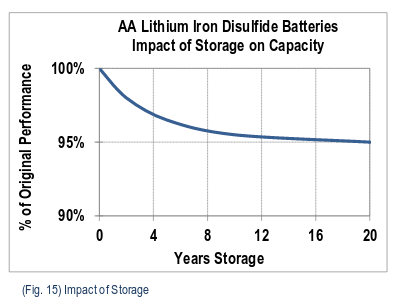 They used to specify 15 year shelf life, so they've either improved the design, collected better data, or have stretched the truth even more - who knows? They've been making these since 1989, so presumably they have enough data at this point to make decent estimates.  But of course, you never know how many marketeers vs engineers were involved in writing the datasheet.

In any case, I figured I could maybe assume 90% remaining capacity at the 20-year mark to be slightly conservative.  I could go all-out and use a 50% de-rating, but the light would be that much dimmer.