In this tutorial, we are going to talk about "IR sensors" or Infrared sensors, how they work and how to build a "DIY IR Sensor Module".

A sensor is a device that detects and responds to inputs from the physical environment. The input can be light, heat, motion, moisture, pressure, or any other environmental phenomena. Sensors are very important part of electronics, especially in Robotics and Automations. The output generated by the sensors are transmitted to other circuits for reading or for further processing. They make our life easy by automatically sensing and controlling devices, without human interaction. In this video, we are going to talk about "IR sensors" or Infrared sensors, how they work and how to build a "DIY IR Sensor Module". 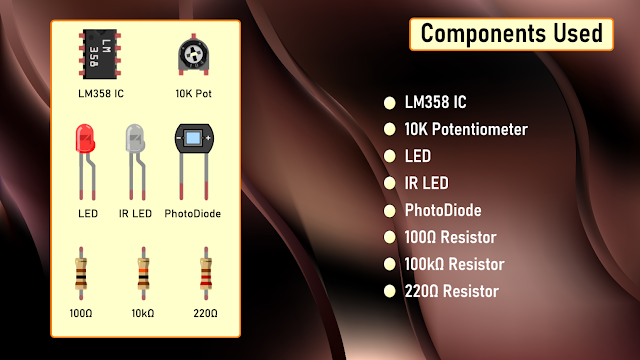 For this project we need: 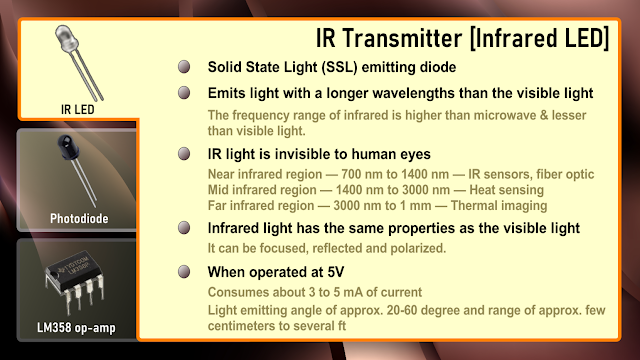 The IR LED (Infrared Light-Emitting Diode) is a SSL (Solid State Light) emitting diode that emits light with a longer wavelengths than the visible light. (The frequency range of infrared is higher than microwave and lesser than visible light). IR light is invisible to human eyes as its wavelength ranges between 700nm to 1mm. Everything which produce heat, emits infrared light, a very common example is the human body and fire. Infrared light has the same properties as the visible light, it can be focused, reflected and polarized.  The appearance and operation of an IR LED is same as a common LED. When operated at 5V, the IR transmitter consumes about 3 to 5 mA of current. Depending upon the Transmitter and Manufacturer, IR LEDs can have light emitting angle of approx. 20-60 degree and range of approx. few centimeters to several ft (Some transmitters have the range in kilometers). Since the human eye cannot see the infrared radiations, it is not possible for a person to identify if an IR LED is working or not. The simplest way to view infrared light is by using a remote control while looking through a camera. If the infrared LED is working, it will appear on the digital camera's viewfinder as a purple glow. Unlike LEDs that project parts of the visible light spectrum, IR LEDs are not used to provide lighting. They are, instead, most commonly used in various signal transferring systems, such as in remote controls, night-vision cameras and other devices. IR LED’s are commonly used in conjunction with the IR receiver to support a wireless communication between 2 or more devices. 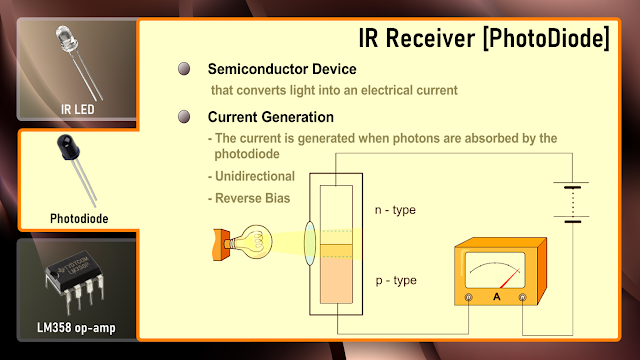 A photodiode is a semiconductor device that converts light into an electrical current. The current is generated when photons are absorbed by the photodiode similar to a Light Dependent Resistor (LDR), means it has very High Resistance in absence of light and the Resistance become low when light falls on it. However, unlike the LDR which is analogue and bidirectional, Photodiode is a unidirectional semiconductor which has a P-N junction and operates in Reverse Bias (means it start conducting the current in reverse direction when Light falls on it). Photodiodes can only do two values: either on or off.

Photodiodes also looks like a LED, with a Black color coating on its outer surface. Different types of IR receivers exist based on the wavelength, voltage, package, etc. When used in an infrared transmitter – receiver combination, the wavelength of the receiver should match that of the transmitter. 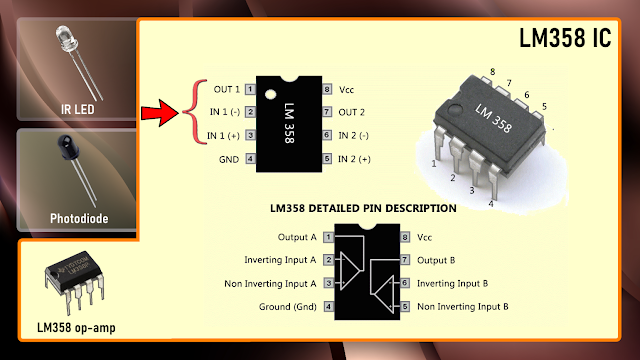 DepthIR: Object detection for the blind

It is a low-cost and simple lighting control system which can be used energy-saving lighting in the places such as passageway and road.
Project Owner Contributor