The evolution tree of LED cubes

There are many LED cubes out there in the wild. The familar Foskubos Koinos, more precisly the Foskubos Tria-Koinos (Greek: LightCube-Three-Common) has many subspecies, typically growing on a substrate of Arduino and available as cultivating kits for homegrowth. This set of sculptures captures the anatomy of some of the rarer species, including the Foskubos Tria-Charlicus, and the mimicking Foskubus Monoklino-Apati (LightCube-Single-Fake).

This is a series of LED cubes, all with different wiring schemas and different size, but all with the same basic ATmega heart. The intent is to show the relation between them, focusing on their wiring anatomy, rather than the visual display. The same is true of the neurological software, although this is not shown in this project.

Currently 4 specimens are shown, the 5th is a misfoster, missing the main LED body. It probably would have developed into a Foskubos Penta, as can be seen by the 5 LED high columns. The collection will increase to show the full diversity as detailled in the family tree (as in "Real Soon Now").

Parts of this evolution tree is conjecture, albeit with evidence of existance of all of them, we just have not secured a livinig specimen. (Full resolution version)

Above is the 1x1x1. Of note is that it's LED seems entirly connected to the brain, no use is made of the support. 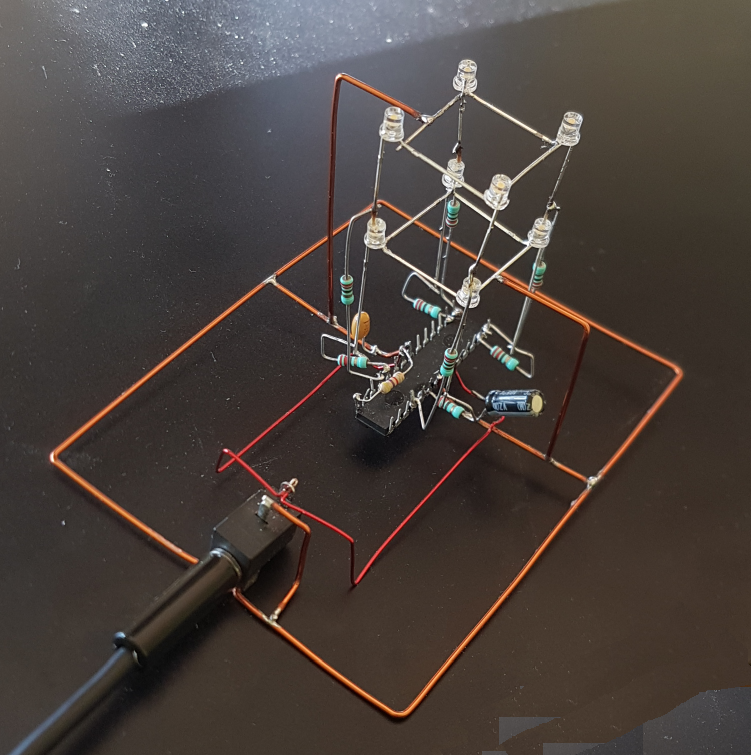 The 2x2x2 uses direct connections; the LED have 8 linkages to the brain, and the support structure supplies the base.

The abve 3x3x3 has the most unsual and least intutive connection paths - Charlieplexed. Note there are only 6 brain connections, yet it controls each of the 27 LEDs seperatly. Closer examination also shows each connection nodule close to the brain is only half the value it is on all other species.

The 4x4x4 has 20 connections, 16 for the columns and four that go through an amplifying(?) nodule for each support leg. This is the highest brain connections possible, the partially grown "Penta" specimen shows it starts using auxilliary neurlogical structures, sort of like a spinal cord.

The embryonic development is shown for the initial phase, before the differentiation into the seperate forms.

It is unclear at the moment how the main LED body forms, as this is deeply dependent on the wiring. The two main theories are it grows by layers, or by columns. Unfortunatly neither of these make sense for the Tria-Charlicus.

Note the "empty" brain, and the half side of the redwire. The LED does not pulse properly of the real Foskubus Monoklino, but rather erratically, like a candle flicker.

The infamous 0-cube. Part of the acubogenesis hypothesis under evolutionary cubology.

Thanks - I might use your excellent thesis in a followup paper :-)

The led heats less. ! Now there is some small brightness in the beginning of the APA107 LED curve. What is very good!!!
Project Owner Contributor