In this project, we attempt to build an autonomous 3D printer farm; which offers a flexible, lean, and agile manufacturing solution. The proposed facility features several Prusa Mk III 3D printers, each of which can independently eject and start print jobs. Unlike traditional manufacturing facilities, our 3D printer farm allows users to continuously update part design; even during production. Moreover, the farm has other potential benefits such as low lead times to start production, the ability to quickly vary capacity, mass customization, a linear costs model, and fully autonomous lights out operation.

We have built a mobile robot that can autonomously swap build plates on a 3D printer.

In additional to programming the robot, we have built a cloud application for uploading and managing the print jobs.

Due to the many advantages of an autonomous 3D printer farm, multiple companies have attempted to build such a facility. As part of our background research, we examined two existing 3D printer farms built by Voodoo Manufacturing® and Formlabs® respectively.

In 2015, Voodoo Manufacturing® demonstrated Project Skywalker: an autonomous 3D Printing Factory. The factory features a 3x3 array of 3D printers tended to by a 6 axis industrial robot arm. This project is the first publicly documented attempt at 3D printer machine tending. While Voodoo Manufacturing® showed the utility of automating 3D printers, we felt their design solution was over engineered. This is evident by the fact their industrial robot arm costs more than the sum total of all the 3D printers used in the factory (UR-10e Robot Arm: ~$40,000; 9 Makerbot Replicator 2 3D Printers: ~$18,000). Our team believes that a much simpler and cheaper robot could be built internally and still accomplish the same task. 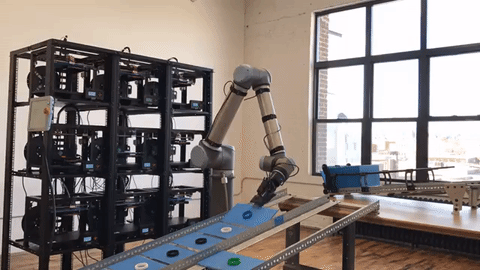 In 2017, Formlabs® released the Form Cell™: an automated 3D printing solution. The Form Cell™ contains several 3D printers, each of which are tended to by a SCARA robot mounted on a gantry system. The Form Cell™ is currently in use by many dentures and prosthetics manufacturers. The Form Cell™ is closer to the robotic solution that our team would like to build. Like Formlabs®, we will also develop a robot internally for performing 3D printer machine tending. However, we disagree with Formlabs® decision to mount the robot arm that tends to the 3D printers on a gantry system. Instead, we believe that such a robot arm should be mounted on a mobile base. This configuration would greatly reduce the footprint of the system. Moreover, a mobile base can easily transverse an entire room, while a gantry system can only move along a set 2D plane. In the latter configuration, users have less versatility in repositioning and adding 3D printers to the factory. This goes against our project’s goal of developing a flexible manufacturing facility. 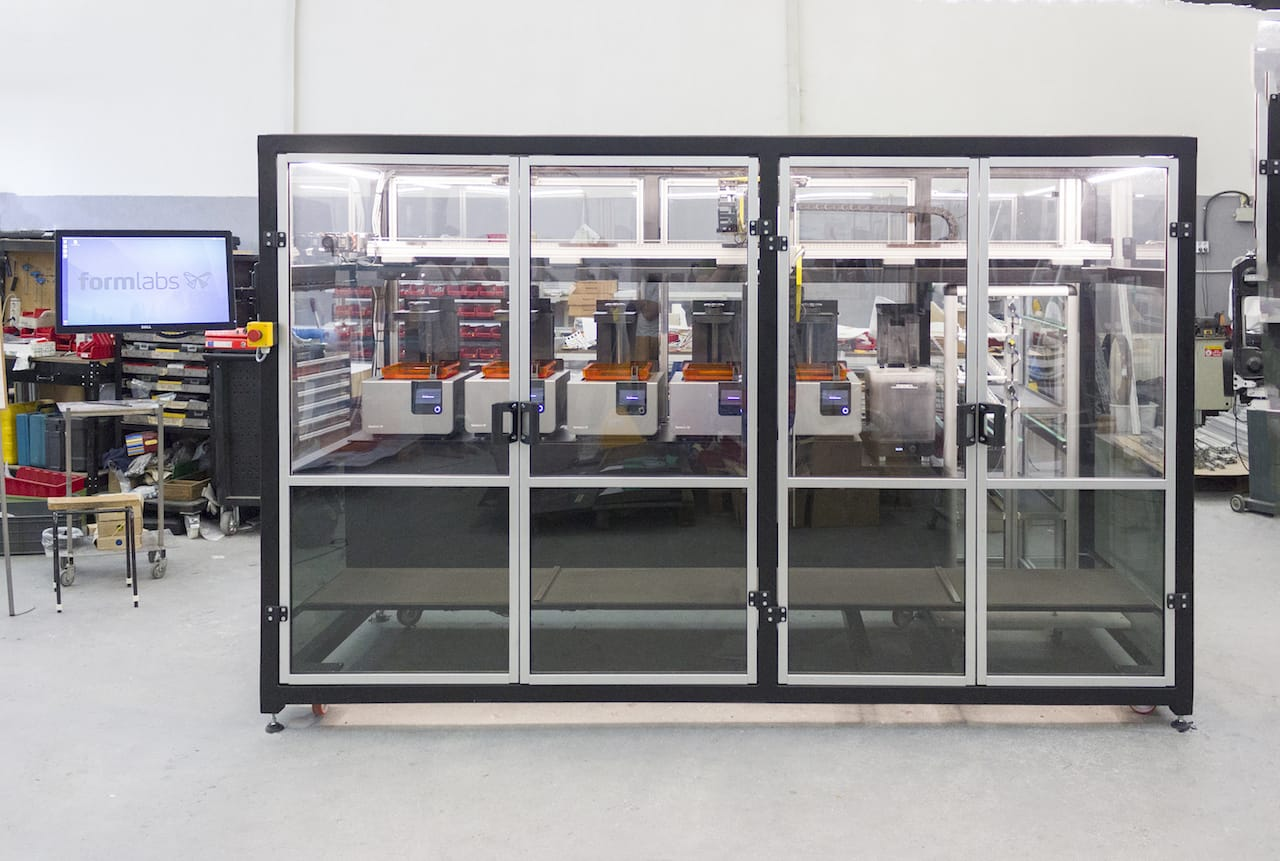 While Voodoo Manufacturing® and Formlabs® succeeded in automating 3D printing production, neither of their solutions met our goal of a flexible, lean, and agile manufacturing option. Both of the above solutions require upfront costs that are too high for most SMEs. Moreover, both designs have extremely large footprints. The autonomous component more than doubles the size of the printer farm. Most importantly, the design solutions are similar to traditional manufacturing cells in that they are not easy for users to adjust, modify, and expand after installation.

To ensure our design solution addresses the problems of previous 3D Printer Farms, we explored other robotic systems that were relevant to our project. In particular, we discussed different end effector options for our design. Previous 3D printer Farms used simple parallel arm grippers to manipulate build plates. 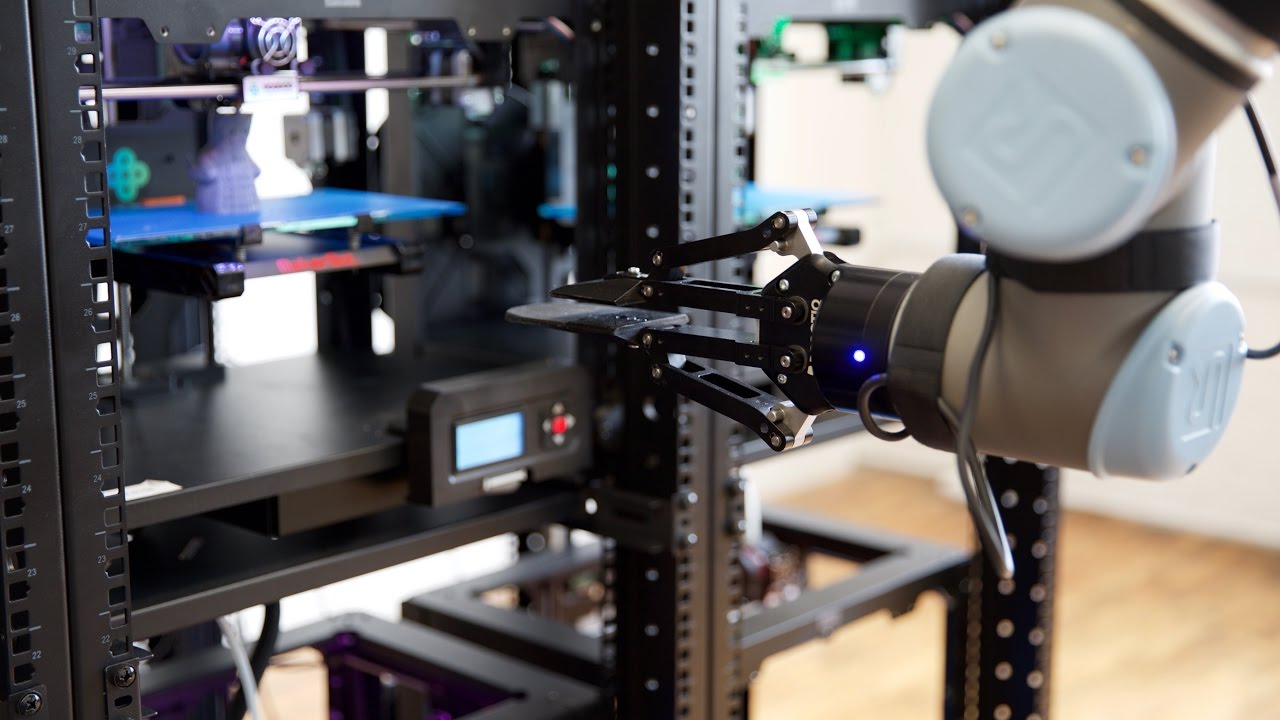 These grippers require a high degree of accuracy to consistently pick up build plates.  A better alternative would be a magnetic gripper system, similar to ones used in the automotive industry. Magnetic grippers would allow for higher tolerance to manipulate the steel build plates. 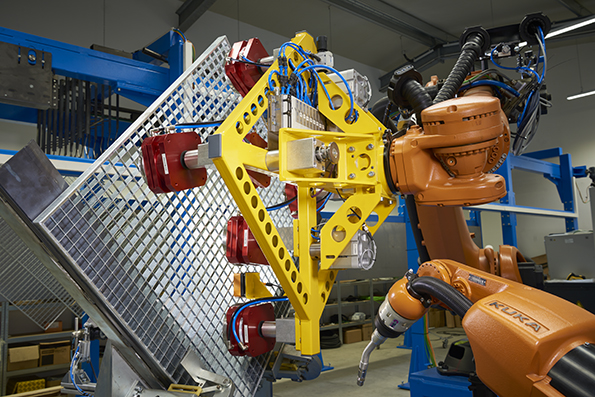 This project is an extension of previous work done by a team member (Swaleh Owais). Initially, we experimented with using a conveyor belt  to automate 3D printers. Documentation for that project can be found here: https://hackaday.io/project/114738-automatic-infinite-3d-printer.

We then experimented with using a 5 axis robotic arm to automate 3D printers.