No doubt that the Raspberry Pi was the Board bringing embedded Linux to hobbyists and tinkerers. In fact I was one of the very early birds purchasing one. As you might remember RS and Farnell got DDOS'ed very badly - it was an awesome feeling seeing the Rapberry gathering that much attention.

But at the moment I'm a bit fed up with it:

I checked all the boards supported by ArchLinux ARM and settled with cubieboard 2: 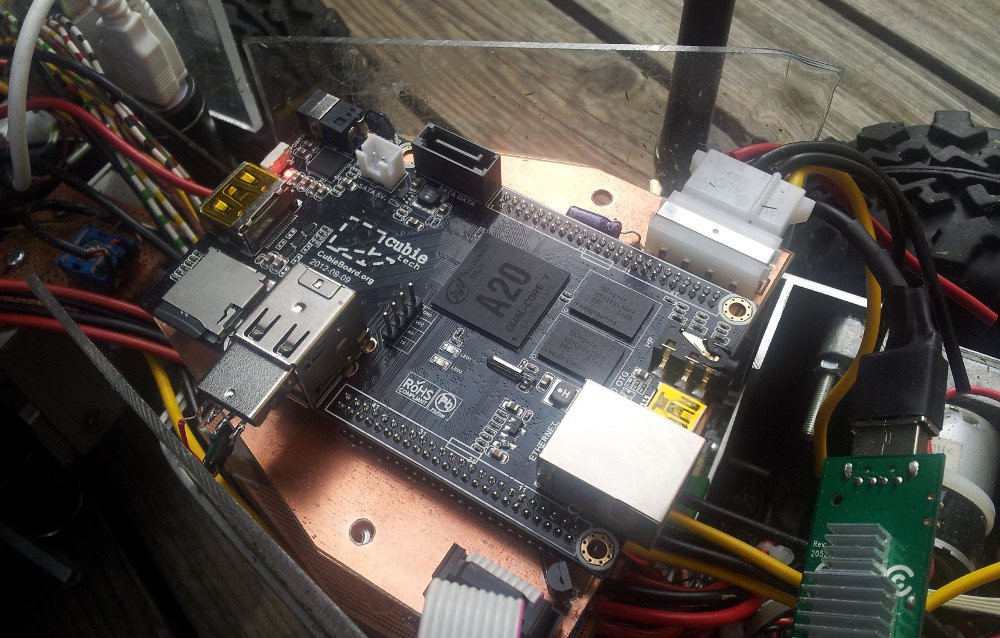 Some benefits relevant for this project:

Things that are not ideal (just minor flaws):

So far I'm very happy with it!

Did you look at the beaglebone black?
I know it has not as much juice as this, but it has 2 PRU's so it could handle i think all/most of the logic and motor driver internal.

But i could guess you have som good explanation :)

Thank you for your effort in sharing.

Yeah, I did look at the beaglebone black. The main reason why I favoured
cubieboard 2 is that the beaglebone has a PowerVR GPU, which is a pain in the
ass on the driver side (according to pretty much everyone on the internet). The
cubie has a Mali400 GPU, where open source drivers are in the works: http://limadriver.org/
I want autoCut to be open source in every aspect, and I might actually us the
GPU for a hi-res display (instead of classic LCD) - so I chose the cubieboard.

As for PRU's / Why I chose I²C + separate µCs:
- I wanted only a I²C connection from the embedded Linux computer to the rest of
the robot to make the computer exchangeable easily
- The first embedded Linux computer (before Raspberry Pi) was a very small
router (TL-MR3020: 400MHz Mips, 32MB Ram) with a bitbanged I²C bus being the
only reasonable interface for robot things
- All the modules should be independent so that they can be used in other
projects
- There are far more parallel things going on than one might think at first
glance. Thus using lots of CPU's makes sense
And: If I wanted to change it now, I'd have to redesign all the electronics and
rewrite all software - nope nope nope :D

And as you mentioned the cubie has more juice. For 15€ more you get twice the
cpu power, twice the ram, twice the flash, twice the usb.
So for me cubieboard is the winner clearly :D