This is a modern remake of the Eicocraft EC-700 Electronic Mystifier. The EC-700 was a hobbyist kit available in the mid-1960s. It had six neon lamps that blinked one at a time in a seemingly random fashion. The circuit had six cross-coupled RC relaxation oscillators and was powered by a 90-volt B battery commonly used in portable tube radios. This project is the fourth in a series of remakes designed to recreate the experience of the original, but using modern circuitry and readily available parts. 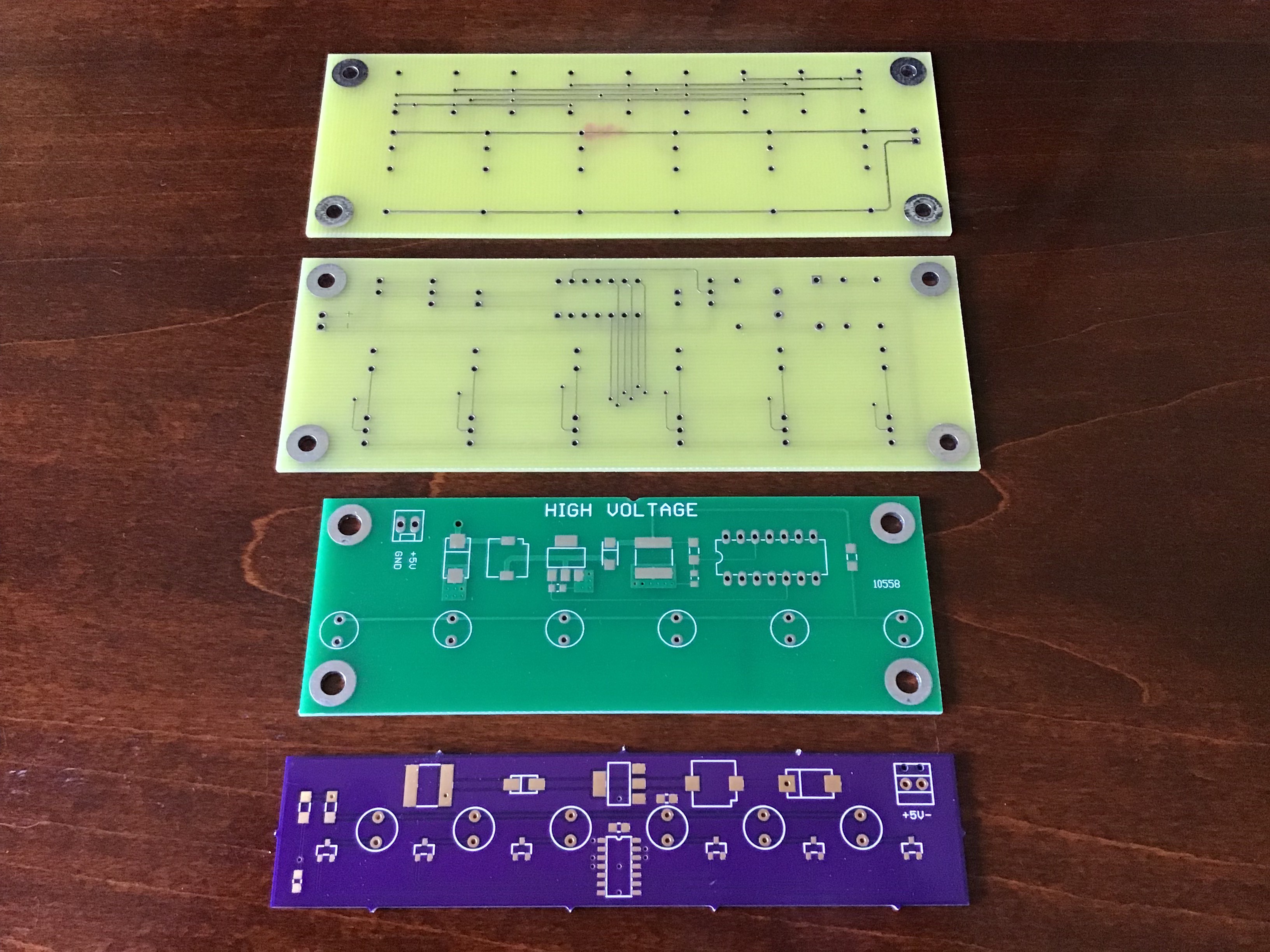 My first version (early-2000s, top) used the exact same circuit as the original, but with much smaller parts and PCB.  However it failed to replicate the random behavior of the original.  I never investigated why.

The second version (mid-2000s) abandoned the RC oscillators in favor of a PIC microcontroller, MOSFET lamp switches, and a boost converter to generate the B+ voltage from a 5-volt power source.  It used all through-hole parts.  The PCB was designed without a specific enclosure in mind, and didn't fit well into the enclosure I later chose, so it too was abandoned.

The third version (2010) introduced surface-mount parts, with circuitry identical to the second version.  It ran for years unenclosed and unfinished.

Finally, this fourth version (2021) uses a significantly smaller PCB that is sized to slip into an off-the-shelf Hammond transparent project box.  Finished at last!

The PIC drives the boost converter at 20 KHz, producing a regulated 100 volts for the neon lamps.  The output voltage can be adjusted (from 80V to 120V) if necessary by changing the firmware.  Randomization of the lamps is accomplished by using a 16-bit LFSR-based pseudo-random number generator (PRNG) and a lookup table.  The seed value for the PRNG is also randomized each time power is applied.  Ten different blink rates are supported, ranging from 1 to 7 blinks per second.  The next faster rate can be selected (without opening the box or changing the code) by removing power within 15 seconds of applying it.  There is a 100 ms fade to soften the transition from one lamp to the next.  ICSP pads for programming the PIC are provided on the back of the PCB.

A word of caution:  High voltage is present when the circuit is in operation.  Use appropriate precautions when handling.  In particular, when holding the PCB to program (or reprogram) the PIC, make sure your fingers are well away from the high-voltage sections of the board, because as soon as the firmware is on-board the high-voltage power supply will start up!  My advice is to populate and program the PIC first, before populating any of the high-voltage components.  Be sure to use an enclosure, as people (especially children) are prone to picking this up to get a closer look at it!

Cool demo. 😺 I believe it's possible to buy LEDs in the shape of filaments nowadays so a low voltage version would be safer to construct.

I sent you a private message reply.

A small but powerful inverter circuit can power up your small devices. A Inverter with square wave Ac on output.
Project Owner Contributor