A hack, but it's working! Connects to any Unifying dongle, lasts forever on 2 AA/AAA.

This is my attempt to hack an existing wireless keyboard (Logitech K400+/TV) into a wireless macropad.

No programming is involved, but lots of soldering...

I wanted a way to build a wireless Macropad which lasts for months on preferably two AA or AAA batteries. I'm already using a wireless Logitech keyboard and mouse, so building something using an existing receiver made sense to me...

Not quite. There's a few pitfalls:

How to do a single button press

It's easy: just find the two pins which connect to the key you want to press. Examples:

Connection between the two pins can be up to several hundred ohms but it can not be a Mosfet or transistor as this messes with the internal polling of the on-board chip.

How to do a multi-key-press

Glad you asked! For my Macropad I want to use CTRL+ALT+SHIFT+F1 to F6 or maybe even F12. How?
Solution: The venerable 74HC4066 Quad single-pole single-throw analog switch. Or even better: many of them :) Here's the pinout (Source: https://commons.wikimedia.org/wiki/File:4066_Pinout.svg): 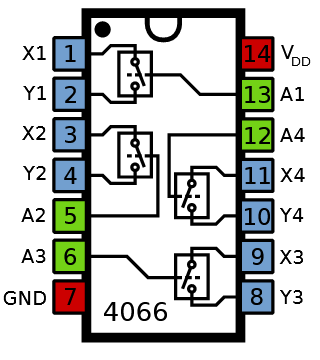 So, let's say we want to press CTRL + X with a single press of a button. For that we connect:

Now when we press the button, the two internal switches of the 4066 are closed and the Logitech PCB sends our keystrokes. Nice, eh? But the controller expects the modifier keys (CTRL, SHIFT, ALT) to be pressed ever so slightly before the other keys.

We use the fact, that when a voltage first is applied to a capacitor, the cap acts like a short. It slowly charges up to what you put in (say 3V). You can read up on it here.

We use that behaviour to activate some keys a few milliseconds after the modifier keys:

36 keys should be enough for everyone
Project Owner Contributor