Existing Tools to build on

Automatic synthesis of digital circuits has been the domain of very expensive electronic design automation tools in the past decades. Since a few years, there seems to be considerable momentum to develop and make available free toolchains for ASICs and FPGAs.

Yosys is probably the project that started the renewed momentum in free EDA tools. Is a versatile framework for logic synthesis and initially targeted a verilog to FPGA flow with a backend specific to lattice FPGAs. In the mean time this has been extended to SymbiFlow an open source toolchain supporting many FPGAs. ghdl-yosys-plugin is a plugin based on GHDL that brings VHDL support to Yosys. (So I can achieve my goal of being able to use VHDL).

I pondered for a while whether it was possible to adapt a FPGA toolchain to create PCB based designs. The idea would be to provide a matrix of fixed functional elements and let the toolchain do the  routing. Unused elements could be removed later. In the end I did not pursue this route since the toolchains are heavily geared towards working with larger functional elements (e.g. LUTs), which cannot be easily implemented in discrete logic on a PCB.

Qflow is an open source synthesis flow targeting integrated circuits, that combines several preexisting tools to a full workflow. It is available from http://opencircuitdesign.com/. Yosys or Odin II is used  for synthesis, Greywolf for placement and routing, qrouter for routing.

The OpenLane flow is another digital design flow that picked up a lot of momentum and sees a lot of activity. It uses Yosys as the synthesis frontend and a newley developed tools, OpenROAD app, for placement and routing. The flow supports the /skywater-pdk, an open process development kit for a 130 nm CMOS process. 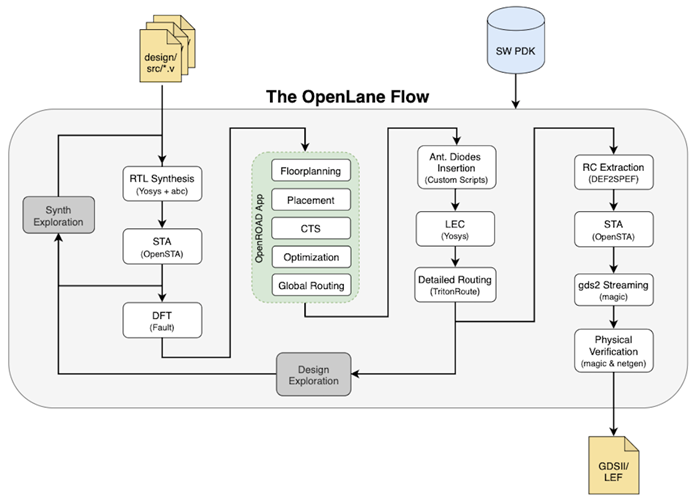 The image above shows the architecture of the OpenLane Flow (taken from here). The input to the flow is a our design file and a description of the technology, the PDK. At each step in the flow, the design is transformed in some way and saved in an internal representation until finally a layout file is generated. There are some feedback loops were tools parameters have to be finetuned to optimize the result.

Let's go through it step-by-step. Normal text is the OpenLane flow, italics are my thoughts.

This step takes the Verilog/VHDL source and turns it into a list of logic gates. The critical step here will be to define a set of logic gates that can be implemented in discrete logic and convince the tool to map to only these gates. Timing analysis is a step we will skip for now as the focus should be to get a functional circuit at first. Improvement of maximum clock speed could be a later optimization.

The floorplan prepares the area where the synthesized logic goes and creates the power network. As a first step I will treat the power network as a normal net, which should be acceptable if performance is not a goal. A big question is wether the tools can be repurposed resued in any way.

Places the predefined logic cells in a grid into the predesignated area on the IC. A critical step is to optimize the arrangement of the logic cells to minimize the length of interconnecting wired needed. We would have to do the same for the PCB and write the component footprints and placements. For our PCB flow, the output of this step should be an unrouted PCB.

Optimized timing of the clock destribution network. For the PCB based flow we can treat the clock network as any other in a first step. This will only work if we can make sure that we have logic that cannot create unwanted conditions as a results of different timing. The easiest way to ensure this is to use D-flipflops.

Routing of interconnects. Tools for ICs typically rely on many routing layers and detailed rules to optmize the routing. Since there are already many autorouters available for PCBs, the first step would be to use an existing tool.

This step is akin to generating the Gerber files for PCB manufacturing. There are many tools available for PCBs, so this should be solveable.

Design rules checks are also available for PCBs, so we can rely on existing tool.