DC to DC converters are quite popular among electronic enthusiasts and are widely used within the industry. There are three major types of non-isolated DC to DC converters: buck, boost, and buck-boost. In this article/video, I used there major components such as the famous UC3843 chip, a power Schottky diode, and an N-Channel Mosfet to design a compact DC to DC boost converter. The input voltage could be as low as 9V that makes it suitable for a variety of applications, such as 12V to 18V conversion to power a laptop computer using a single 12V battery.

I used Altium Designer 21 and SamacSys component libraries to design the schematic and PCB. The PCBs have been fabricated by the PCBWay in the green solder mask. Also, I examined the noise figure of the circuit using the Siglent SDS2102X Plus/SDS1104X-E oscilloscope and Siglent SDM3045X multimeter. So let’s get started!

Output Voltage: 28Vmax (can be increased, see the text)

Figure 1 shows the schematic diagram of the DC to DC boost converter. As it is clear, the heart of the circuit is the UC3843 chip [1]. 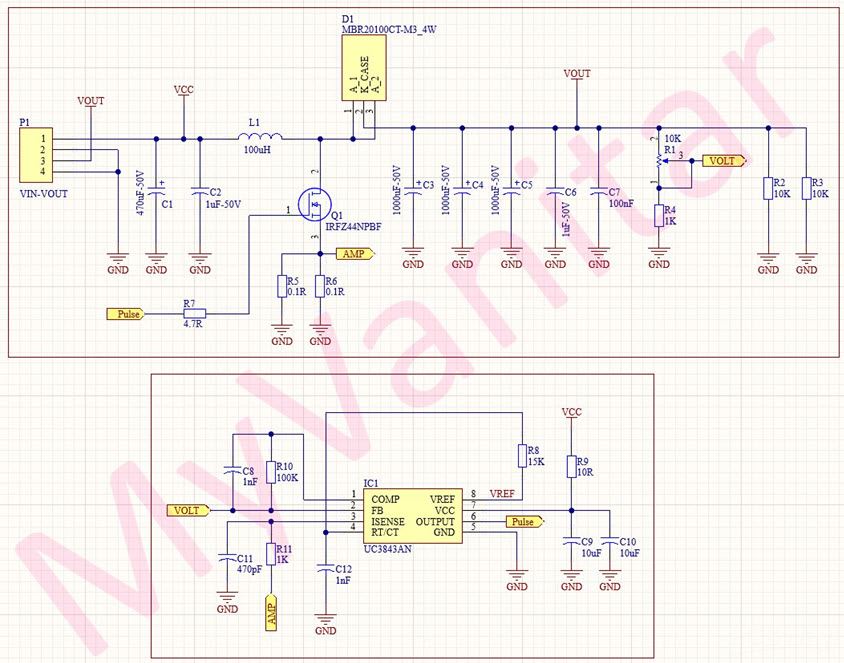 C1 and C2 have been used to reduce the input noises. L1, D1, and Q1 build a boost conversion network. L1 is an 8A to 10A 100uH inductor. D1 is the MBR20100CT [2] Schottky diode (two parallel diodes in one package). Q1 is the IRFZ44 N-Channel Mosfets [3]. The ON resistance (RDS(ON)) of the Mosfet is just around 28 milliohm and it can handle up to 50A at 25C. So, these characteristics make these components a good fit for this project.

IC1 is the controller of the boost converter circuit. According to the UC3943 datasheet: “The UC3842/UC3843/UC3844/UC3845 are fixed frequency current-mode PWM controller. They are specially designed for Off-Line and DC to DC converter applications with minimum external components. These integrated circuits feature a trimmed oscillator for precise duty cycle control, a temperature compensated reference, a high gain error amplifier, a current sensing comparator, and a high current totem-pole output for driving a Power MOSFET.”

C3, C4, C5, C6, and C7 are used to reduce the output noise. Usually, a boost converter output is noisier than a buck converter, especially by using discrete components. A single-chip buck/boost controller is less noisy, however, the output voltage and current of these controllers are limited.

Figure 2 shows the PCB layout of the design. It is a two layers PCB board with a mixture of SMD and through-hole components. A view from the top layer, bottom layer, and silkscreen and solder mask (top layer) have been all included in figure 2.

Figure, The PCB layout of the DC to DC boost converter

As I mentioned in the abstract, I used the Altium Designer software [4] to design the schematic and PCB. I did not have the schematic symbol, PCB footprint, and 3D model of several components in this project. So instead of wasting my time in designing the component libraries from scratch and increase the risk of errors and mismatches, I used the free and IPC-rated SamacSys component libraries and imported them right into the Altium PCB project using the SamacSys Altium plugin [5]. SamacSys has provided plugins for the majority of electronic designing CAD software [6], not just for the Altium Designer. Figure 3 shows the supported electronic designing CAD software.

Specifically, I used the SamacSys libraries for IC1[7], Q1[8], and D1[9] which you can consider in the references. Another option is to download the component libraries from componentsearchengine.com and import them manually. It’s up to you. Figure 4 shows the selected components in the SamacSys Altium plugin.

Figure 5 shows the assembled PCB board from top and bottom. This is the prototype of the circuit. In the last revision, I have added two parallel resistors as a preliminary load. Some components are through-hole and some are SMD. You shouldn’t have any problem with soldering the components, however, you can order an assembled board.

Figure 6 shows the output noise of the boost converter under no load. I used the power analysis feature of the Siglent SDS2102X Plus oscilloscope [11]. Of course, you can use the cheaper Siglent SDS1104X-E oscilloscope [12] as well, however, the plus one is something beyond. It is a role model device. Some long inductance spikes can be seen in the waveform that is unlikely to come from the output line. So I kept Vrms as an indicator.

Figure 6, The output noise of the DC to DC converter using Siglent SDS2102X Plus oscilloscope

Figure 7 shows the output noise of the DC to DC converter under a 2A load. The same as above, I don’t think these longs spikes are really coming from the supply. When I move away from the probe, these spikes vanish significantly. I recommend you to use some capacitors just as close as possible to your load.

Figure, The output noise of the DC to DC converter (2A load)

Figure 8 shows the bill of materials of the circuit. L1 is a 47uH to 100uH inductor that you can build or purchase. I built it myself, so I can not offer any specific part number for that. However, make sure that your inductor can tolerate currents of at least 8A to 10A. You can use a 1mm copper wire and a toroid ferrite core. The used drill size for the inductor footprint is 1.3mm.

Figure, Bill of materials (except L1)