Projects I'm going to have to try.

A solar charger is a charger that employs solar energy to supply electricity to devices or batteries. Solar chargers can charge lead acid or Ni-Cd battery banks up to 48 V and hundreds of ampere-hours (up to 4000 Ah) capacity. Such types of solar charger setups generally use an intelligent charge controller.

A simple solar charger must have 3 basic features built-in:

The main property of this device to convert solar energy to electrical energy has made it very popular and now it's being strongly considered as the future solution for all electrical power crises or shortages.

Solar energy may be used directly for powering electrical equipment or simply stored in an appropriate storage device for later use.

Normally there's only one efficient way of storing electrical power, and it's by using rechargeable batteries.

Rechargeable batteries are probably the best and the most efficient way of collecting or storing electrical energy for later usage.

The energy from a solar cell or a solar panel can also be effectively stored so that it can be used as per one's own preference, normally after the sun has set or when it's dark and when the stored power becomes much needed for operating the lights.

Though it might look quite simple, charging a battery from a solar panel is never easy, because for two reasons:

The voltage from a solar panel can vary hugely, depending upon the incident sun rays, and the current also varies due to the same above reasons.

The above two reasons can make the charging parameters of a typical rechargeable battery very unpredictable and dangerous.

About this solar charger circuit

This solar charger is actually a Low Dropout Voltage (LDO) charger. It uses a series P-channel MOSFET linear regulator and a simple differential amplifier. Though it is mainly intended for charging 12V lead-acid batteries, the output charging voltage can be adjusted by the potentiometer. 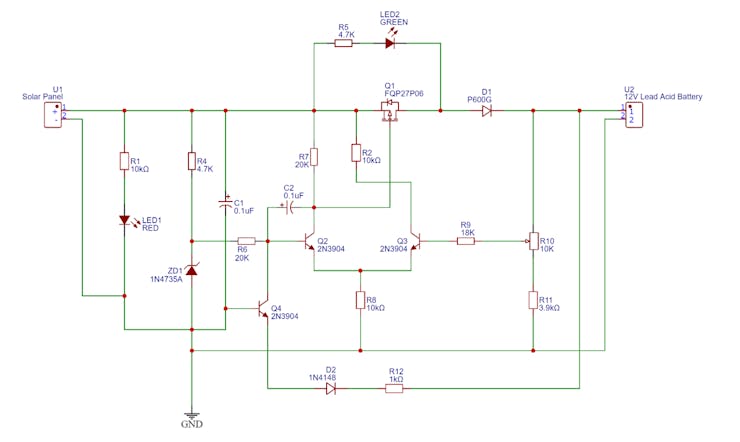 R4 and D1 form a 6V shunt Zener voltage reference. Q1 & Q2 make up the classic differential amplifier that amplifies the difference between the reference voltage and the feedback voltage from the arm of potentiometer R6. The output is taken from the collector of Q1 and drives the gate of P Channel MOSFET Q3. Differential voltage gain is probably in the order of 100 to 200. For best performance, I selected Q1 & Q2 for matched hFE. As the feedback voltage increases at the arm of R6, Q2 turns on harder and steals some of the emitter currents away from Q1. The collector current of Q1 follows the emitter current and drops less voltage across R1 thus reducing Vgs of Q3 and turning it off. C2 provides frequency compensation to prevent the amplifier from oscillating.

Q3 is dormant unless the battery is the...

18650 Li-Ion Battery Power Bank with 5V and 3.3V Output with up to 3A
Project Owner Contributor