So, part of this project will involve creating very fast light pulses (the photo-flashes), and part will be detecting fast optical pulses (the milk drop and bullet detecting photo-gates). The two, of course, are related in that a fast optical pulse generator can be used to test a detector and vice versa. So, it seems reasonable to develop some test circuits on both sides - generating and detecting brief pulses of light. My first step was to build a fast laser pulser, shown here and described below. But how to test it? I happened to have a head start on the detector side. A while ago (2009), I got lucky and found a 1 GHz avalanche photodiode module on ebay. The seller claimed it was a Hammamatsu C5658, which I have found little reason to doubt, except that it's mounted in a custom enclosure that was removed from some larger piece of equipment. It has proven very useful over the years for measuring optical devices, and I even breadboarded a LIDAR sensor with it at one point (it wouldn't be cost-effective). The module runs on 12V and has a 50-ohm output into an SMA connector - you can just hook it right to an oscilloscope or spectrum analyzer. This forms the bottom rung of my bootstrap ladder.

But, I realize that this module is going to stop working someday, and I don't have the resources to buy a new one. It would also be nice to come up with a simple design for a sensor anyone wanting to experiment with fast light pulses can build. Since the pulses I'm concerned with are very bright, most of the subtleties of photodiode amplifiers and their noise characteristics can be happily ignored. But, to verify the detector, I need a known fast light pulser - the second bootstrap.

Here's the quick circuit I knocked together. It uses a 74AC14 Schmitt trigger inverter as a a 1.25 MHz relaxation oscillator buffered through two more gates before driving an inexpensive and largely undocumented Ebay red laser diode. I have previously torn down and tested these diodes to determine their lasing threshold (about 10 mA) and damage threshold (less than 20 mA seems OK).

Here's how it was tested against the purportedly Hammamatsu APD module (the black box on the left). I inserted various neutral density filters in the beam to ensure the detector was operating linearly. 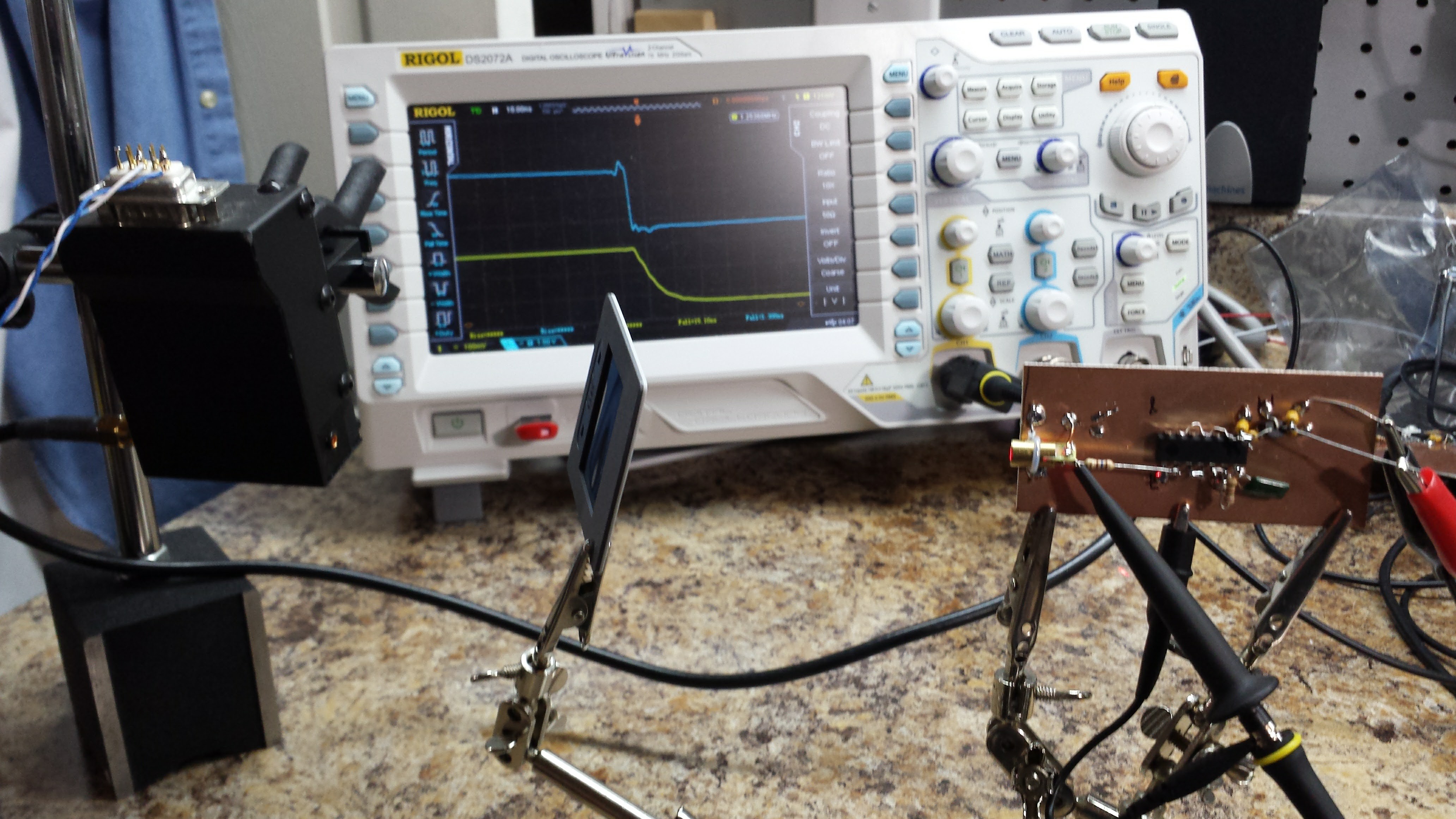 The diode drive, measured at the diode/resistor junction, is shown in the yellow trace, while the received light pulses are shown in cyan. The oscillation frequency is 1.255 MHz. I bought that "70" MHz scope with Hackaday Prize money (Thank you!!!) 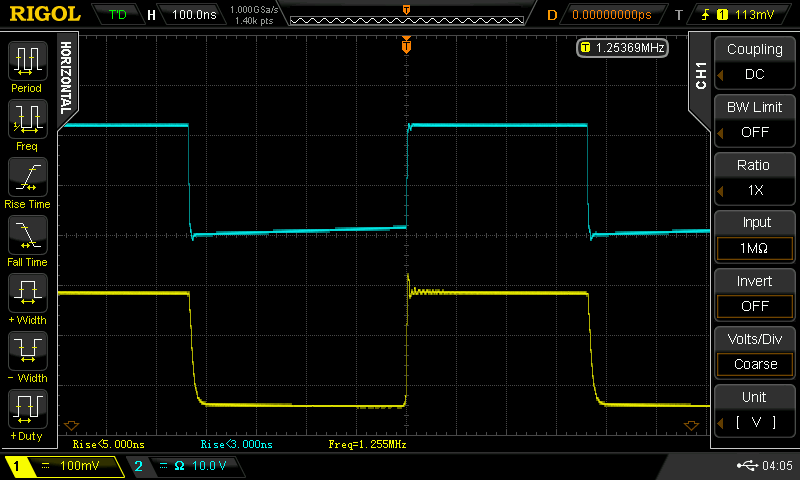 Here is the leading edge zoomed-in. Although the voltage at the laser's anode shows a rise-time of 2.34 ns, the detected light output reads 1.18 ns. I believe this may be due to the lasing threshold squaring up the edge (does anyone know for sure?). But, this is being measured on a 300 MHz scope coupled to 1 GHz APD module, with a combined rise time of around 1.2 ns, so the laser rise time may be significantly shorter. I also got lazy with the probing and just used the regular ground lead (on the yellow trace), so the electrical measuement may not be that accurate. In any case, the light pulse seems more than fast enough for testing the photogates I need to design. 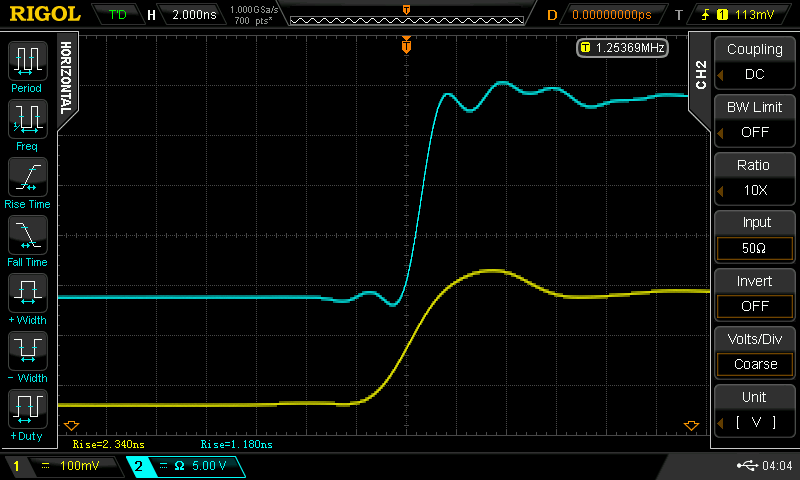 Here's a measurement of the fall time. The driving waveform is pretty slow here (15.5 ns), but the lasing threshold appears to help us out again, speeding the optical fall time to a respectable 2.9 ns. 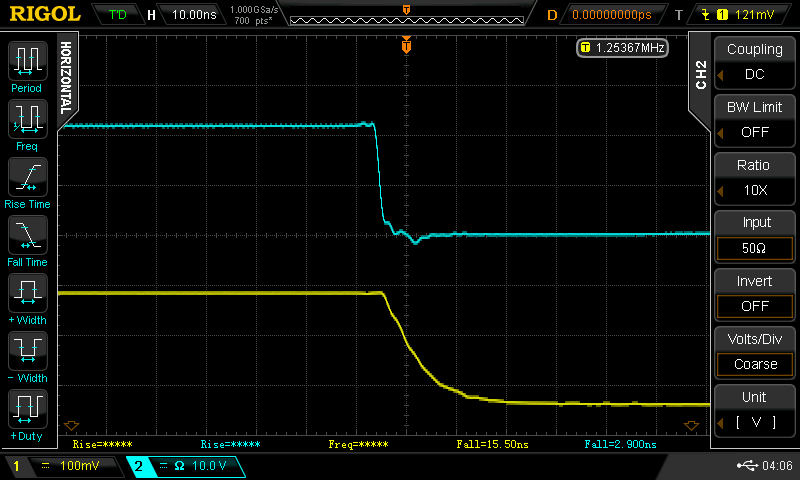 I put together a quick and easy photodiode probe ignoring the two best pieces of advice about them: always use reverse bias, and never just connect them across a 50-ohm resistor. In most situations, you really need to follow the rules, but with an excess of optical power, you can get away with the 50-ohm thing, and I'll take the hit on speed for omitting the bias. Here's the schematic:

and a picture of the unit: 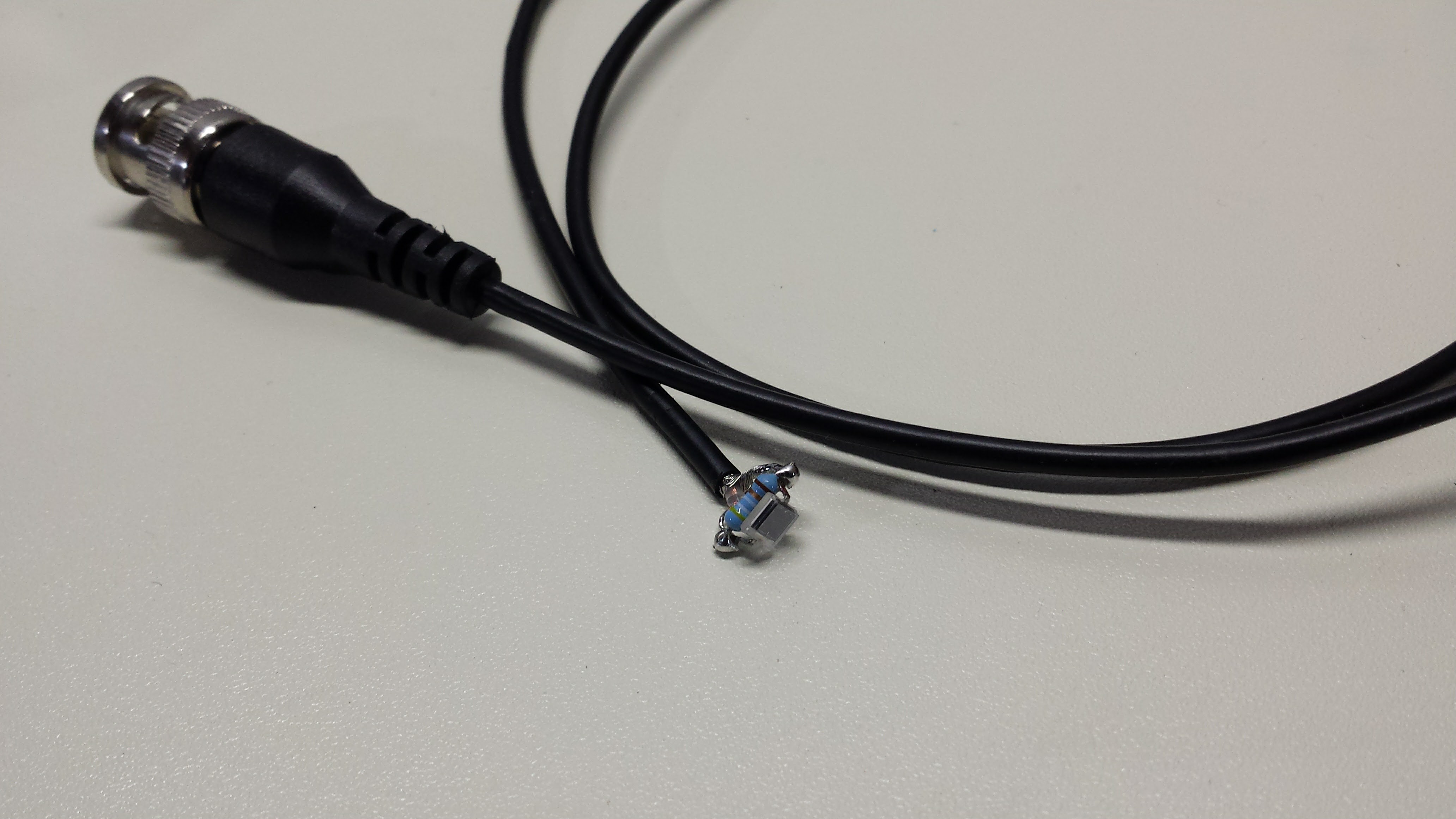 I bought some cheap RG174 BNC cables on Ebay to sacrifice in this way. They won't win any awards for low reflections, but they fit on the scope. Double-terminating them (50 ohms on both ends) helps squash reflections, but it's not really necessary at the speed of this detector. I tested the detector using the fast laser pulser - another rung on the ladder! Here's the result: 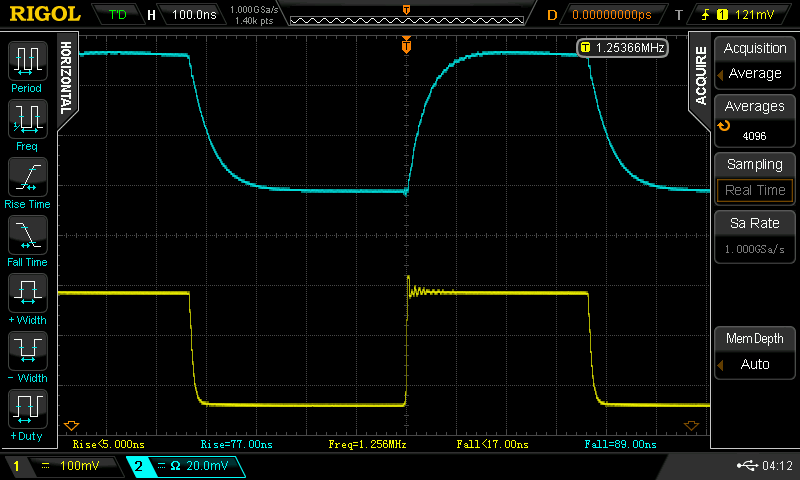 It's not great, showing 77 ns rise-times and 89 ns fall-times. This can undoubtedly be improved by applying reverse bias and/or using a faster diode. On the other hand, it's not bad for a cheap photodiode. I have a sample of BPX61 and MTD5010W diodes (20 and 3.5 ns rise-time specs, respectively) to make some faster probes (including reverse bias provided by a pair of 9V batteries). I'll document the results in a subsequent log.

Even if the performance of this probe isn't stellar, it would still be fine for measuring the relatively long 1 us flashes I have in mind.