Let there be *more* light 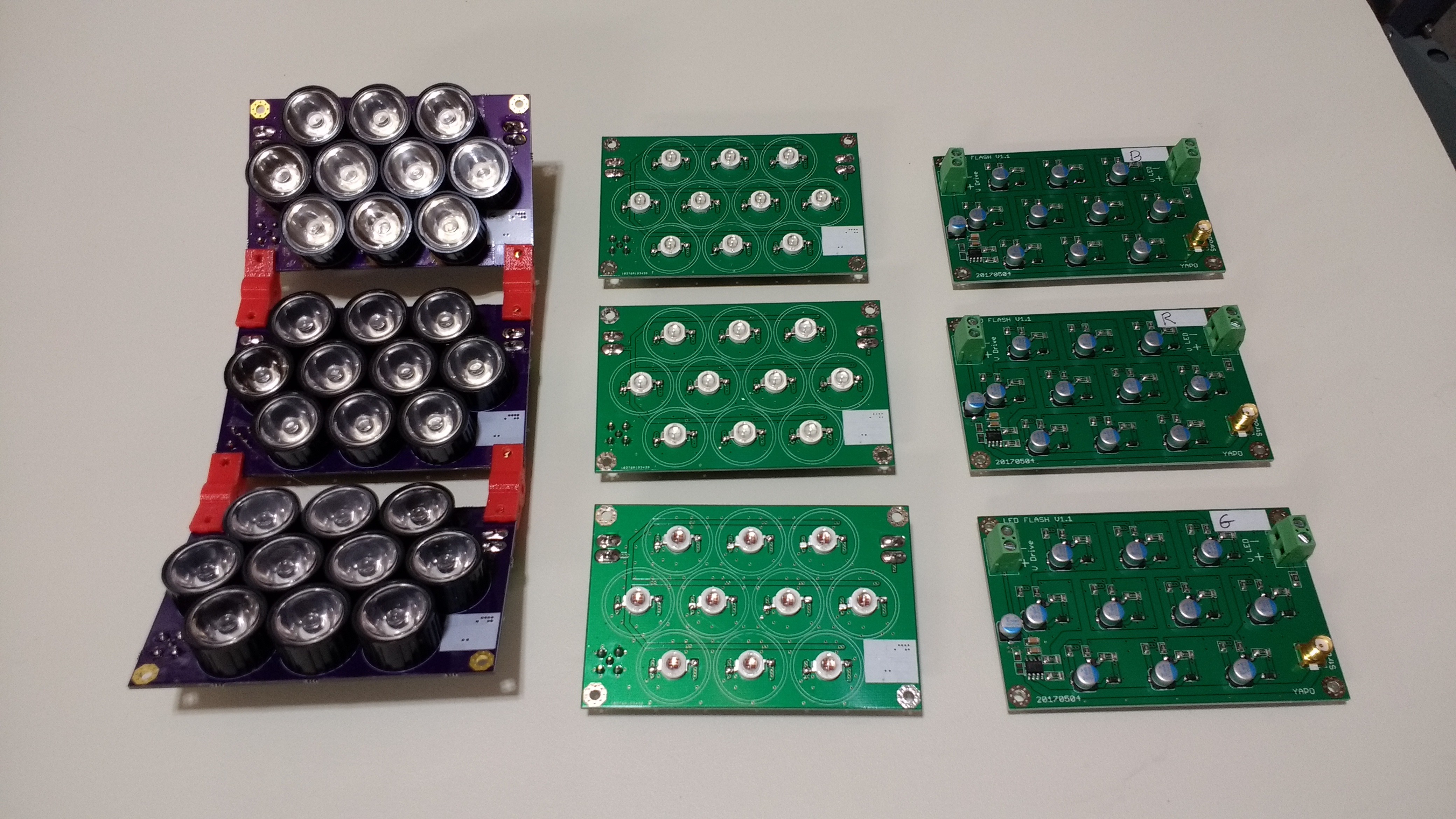 I assembled the remaining two purple PCBs (red and blue LEDs), and six of the green ones. The OSH Park ones on the left have the lenses attached and are connected with some 3D printed connectors I designed to focus the illumination about 25-30cm away from the boards. The lenses have a 25-degree angle and are designed to fit on the 1/3/5W LED cases. I just finished testing the green boards, so haven't had a chance to attach the lenses with thin double-sided tape yet.

This was a large enough batch of boards that I saw some failures in the assembly process. I applied solder paste with a 1cc syringe and a 22Ga needle, hand-placed the components with tweezers, then reflowed the boards on a hot plate. I caught a few tombstoned resistors during the reflow and pushed them back down with tweezers. I mostly attributed this to the green boards being a little warped and not sitting flat on the hot plate. The resulting uneven heat caused one side of some components to melt first, and erect the tombstones. I didn't have any tombstones on the OSH Park boards, which are definitely more flat.

After manually soldering the LEDs on the front side, I found two LEDs that didn't work. In both cases, one smd resistor looked connected, but wasn't. A quick touch with a soldering iron fixed both.

Each board has about 70 SMD components on it, so with 9 boards, that's 630 parts. Two parts got mounted in a way that didn't work, for about a 0.3% failure rate. Looking at it another way, two of the nine assembled boards were defective, for a 22% failure rate. I don't think I could make a business selling boards with this kind of success rate, although they all work now. I don't have any plans to commercialize these boards anyway, but it's interesting to see the issues with hand-assembled surface mount.

I bought 100 of the aluminum polymer capacitors used to store the LED flash energy. Since I was buying a bunch, I also used them for bulk storage caps on these boards and the pulse distribution hubs. This meant I actually need 102 of them! I can just substitute another cap on two of the remaining hubs, but it sucks to run out of the "right" part.

I designed the red board clips based on some simulations of the lenses in OpenSCAD. Before ordering 100 of them from China, I wanted have some confidence that I had chosen the right beam angle, since there are a wide variety available. I can always switch them, but it would take a few weeks for new ones to arrive. Here's an image of the simulation:

It's pretty basic, but it let me figure out how to design the mounting clips based on the desired lighting volume.