A one transistor MW/AM radio.

It seemed to be within reach so I had a go. Here is my design:

The idea behind the "gain" switch is to reduce the gain (open) for loud station in order to reduce distortion.

Works well. Volume out of a small 5w speaker was quite adequate for home use.

Voice was fine but music was badly distorted. Reducing the gain did not help.

A single sided class B audio amplifier is not going to help either.

I think the receiver is too selective for music.

I should have stayed with the 3 turn coupling coil rather than changing to 2 turns.

I think I am ready to "box up" this receiver and call it done.

I had a go at designing a MW PCB coil: 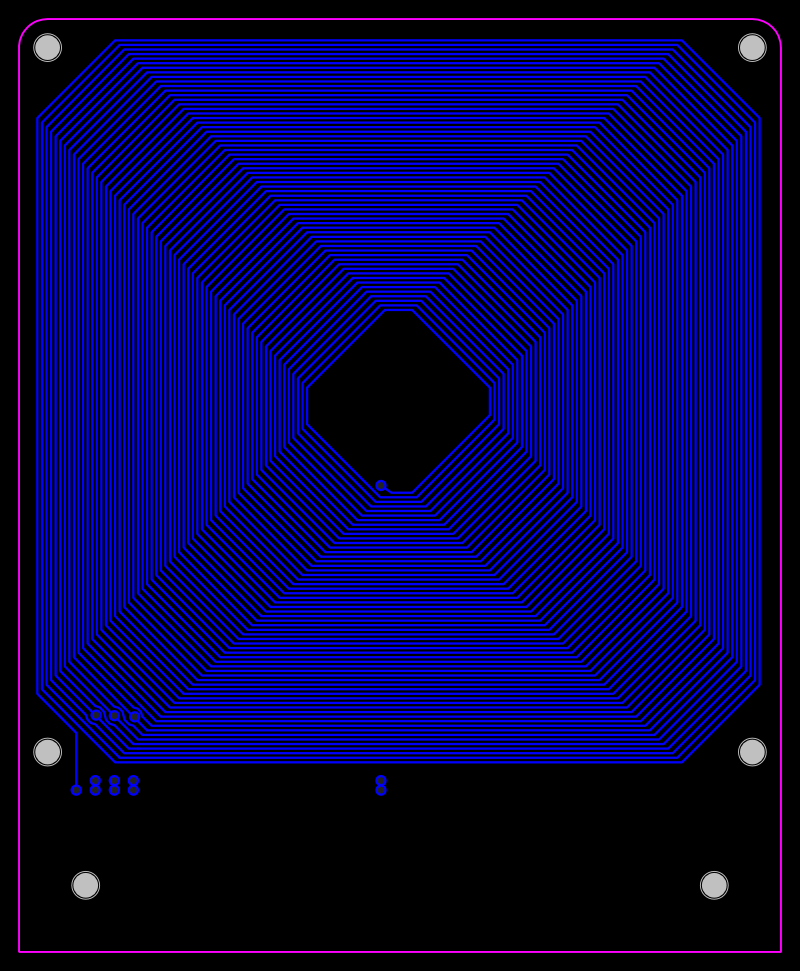 I suspect that to use these coils a regenerative design may be required.

Decided to rewind the coupling coil from 2 turns to 4 turns.

Louder (expected), less selective (but still too selective) and much less distortion.

The gain switch resistor may need to be increased from 22R to 33R or 47R.

Boxing Up The Receiver

I made up a front panel (done): 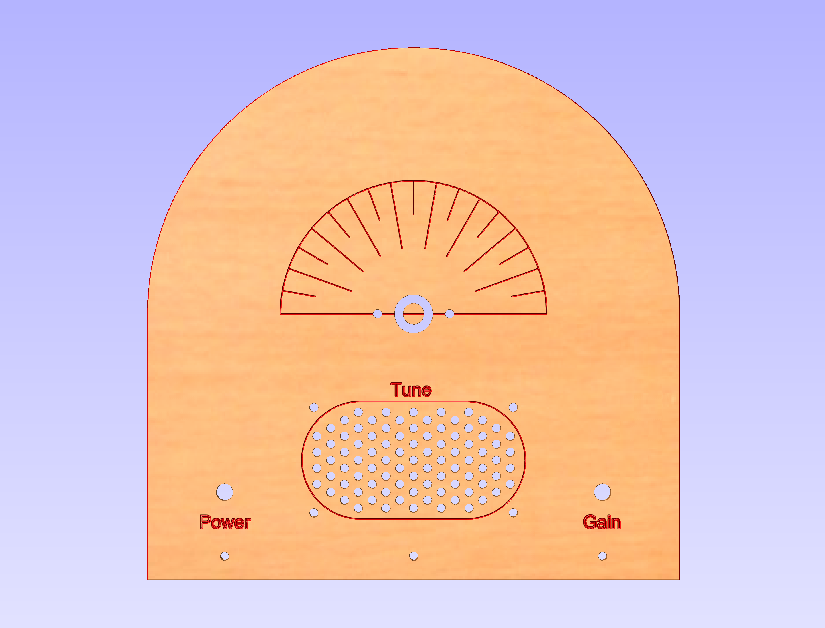 And a matching new coil former for 0.63 mm diameter wire (to be completed): 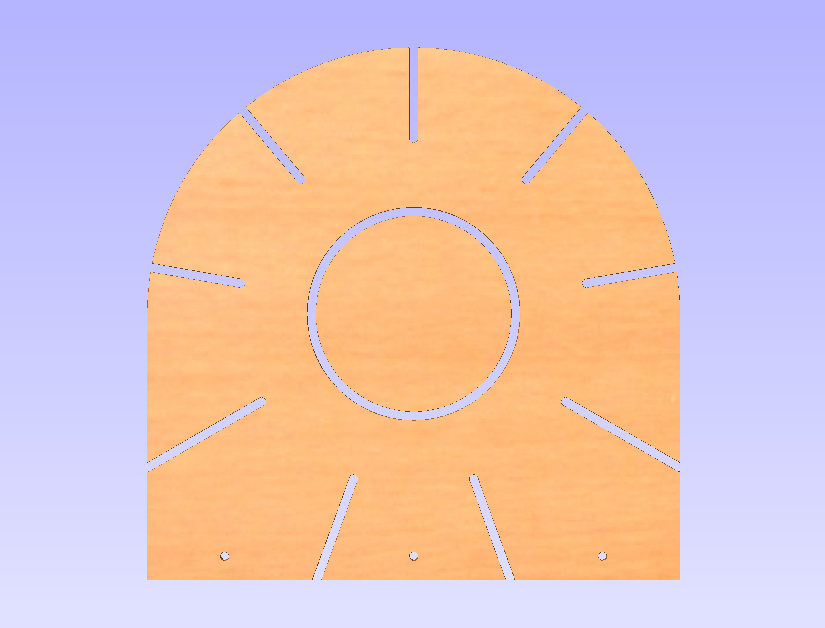 Here is the finished project: 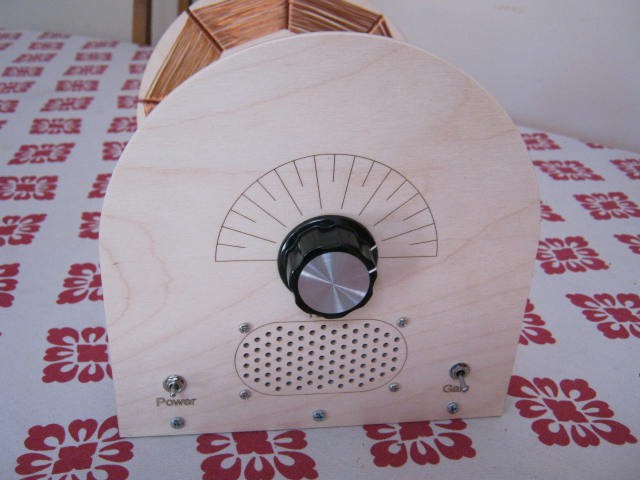 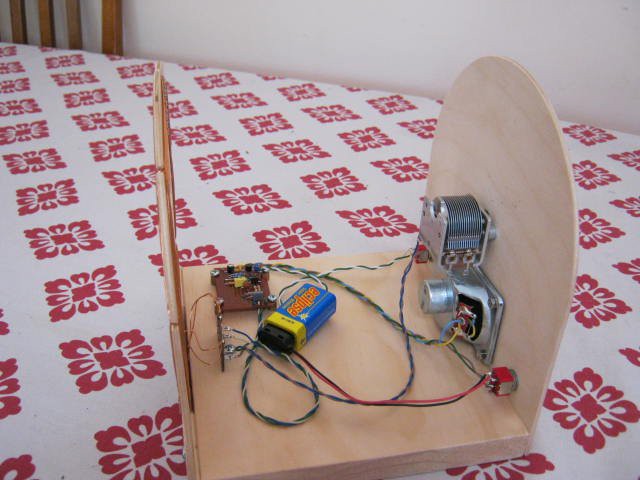 Several problems with the set:

I swapped out the coil for a PCB version and it works but nowhere near as loud: 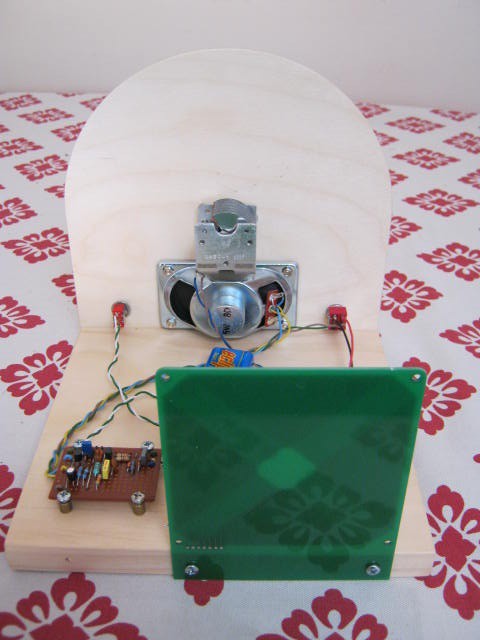 The PCB coil has very low Q (about 44) but selectivity is okay in this application. The reflex has some regeneration.

Distortion is much better with this coil.

If I want more volume I will have to swap out the 9v battery and use some AAs (i.e. 3v) as they will last longer. I will also have to change some resistor values.

The distortion makes this receiver disappointing. The problem is not with the Class B audio amplifier as the problem exists with a crystal earpiece.

I originally thought that the problem was because the receiver was too selective but the problem persists even with the low Q coil.

Although the receiver is called a Reflex and the RF is decoded by the diode network and re-amplified by the first transistor it is not quite that simple. It is also regenerative because it does matter which way the coupling coil is linked up.

The diode detector is acting as a square law detector with unit gain around 100 uV to 1 mv because the audio voltage increases as a square of the input voltage. But I think it is also regulating the regenerative feedback. I am starting to think that in the presence of a signal the receiver goes into oscillation (or the level of oscillation increases) and demodulation is more mixing than square law detection. Particularly as the diode network is unbiased.

As per the "synchronous detector" I built, if over-driven (i.e. too much feedback), the demodulation becomes chaotic (i.e. distorted). This chaotic behaviour is probably equivalent to parasitic oscillation.

So I suspect the distortion is actually parasitic oscillation. The solution may be to increase the value of the 100R base resistor to say 220R or higher.

Tried the 220R resistor improved but not fixed, 330R improves a little more but reduces sensitivity. It seems the remaining distortion is for strong stations and mostly in the Class B amplifier. Is it the Class B or parasitic oscillation? Perhaps I should increase the base for the Class B as well.

Well, 330R works a bit better but using the oscilloscope shows the audio saturating (may be going into oscillation?) in the first stage. The saturation shows up as an exponential spike on the audio. So the only option now is the gain control "emitter" resistor. Tried a couple of values but the 22R seems best for the PCB coil. Still the gain control does not work exactly as intended on strong stations so I would drop it in the next revision.

So now the audio is fair for most stations except the strongest and for those. the gain control pulls them down and tames them (well sort of).

Given the square law response of the detector this is probably about as good as can be expected without automatic gain control.

One last try, I though the 33 pF "collector capacitor" may be partially to blame so I increased the value to 47 pF. The reason for this is that another experimenter stated that a lower RF choke values increase selectivity while a larger RF choke value increase volume. I have not found the volume argument to be true but the selectivity claim I cannot dismiss and I think it may be right. The larger capacitor was expected to decrease gain and reduce the likelihood of oscillation. Yes it reduced the volume but the distortion was still there.

I am back to the need for an AGC.

Hard to leave this thing alone but I have cracked the distortion problem (without resorting to a proper AGC).

Since the source of the distortion was an exponential like audio spike from the detector stage, I decided to a a soft limiter:

The 10k resistor seems to be a reasonable start point. The limiter seems to delay the onset of oscillation as well (if I remove the 22pF capacitor).

Here is the strip-board design: 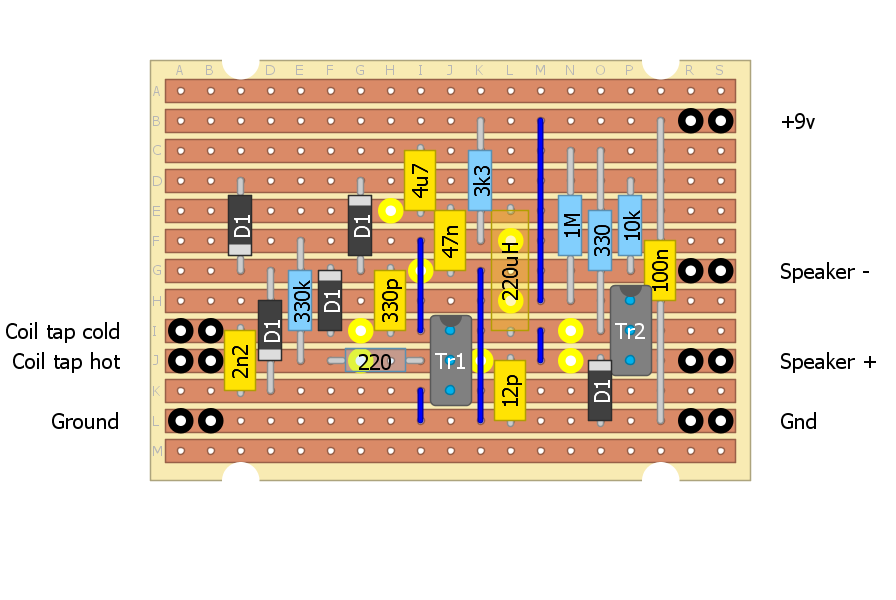 Gain is down but distortion is absent (Yeah!). Listening to music is now quite reasonable. Swapping out the PCB coil for the over-wound and over coupled spider coil, distortion is still a problem but much less, but this may be partially due to the high Q or very narrow bandwidth of the coil.

So rewinding the coil and reducing the coupling should workout well.

Easy to do, replace the 1M resistor with a 470k resistor. Worth a try as current consumption still quite low (<10 mA).

Another option is an audio input attenuator for strong stations.

Although the clipper works the cost is gain (no surprise).

Probably the best option is to adjust the bias (quiescent current for the audio amplifier) for your set up and let it be.

If current consumption is too high (for a reasonable life for a 9v battery) then reconfigure the circuit for a 3v power supply.

The clipper would be a useful addition if a better (i.e. higher gain) audio amplifier is used.

All in all the current set up and sound quality (for AM) is quite pleasing. Just need to build another spider coil which covers the AM band properly and perhaps less coupling.

I have mentioned that the reflex circuit is a bit more complex than it first appears.

One is that it is regenerative (i.e. it matters which way the coupling coli is connected).

The second is that on each side of the station, audio beats (whistles) can be heard. So it is actually a synchronous receiver. The beats disappear when the oscillation locks onto the station.

The beats are not so obvious with the PCB coil but they are there.

The whistles tell you a station is near!

Swapped out some resistors and configured the receiver for 3 volts. Two AA batteries will last longer than a 9v battery and is cheaper to replace.

Surprisingly the gain was higher and all the whistles are gone.

Some distortion with the strongest station but otherwise all good.

Rewound the coil for 32 turns and 8 turns. Volume is good and selectivity is good enough (not great). No whistles but synchronisation is pretty obvious when you know what to hear for.

Increased the audio quiescent bias from 6 mA 12 mA (to adjust for the higher volume of the new coil) by reducing the bias resistor from 100k to 47k. Only the strongest station still suffers distortion. Really I should add another transistor to make a conventional push-pull audio amplifier but then it would be a three transistor design rather than a two transistor design! Here are some images: 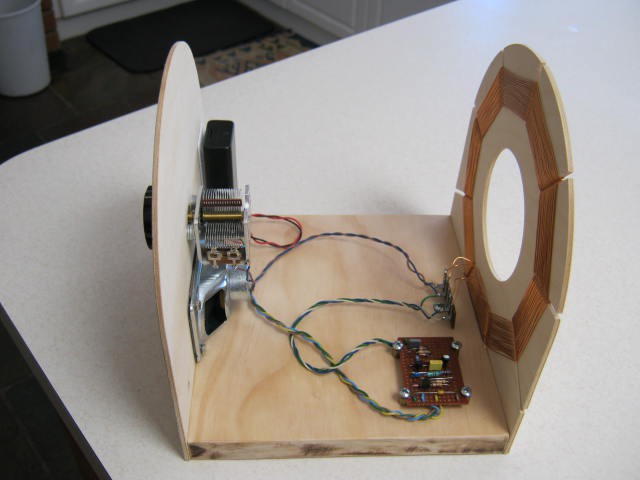 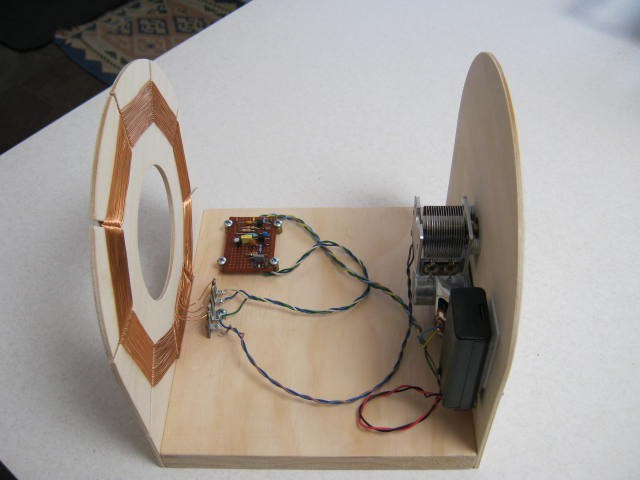 So all good. Unlikely to come back to this project.

If you drop the supply voltage and don't mine high current draw this one works: 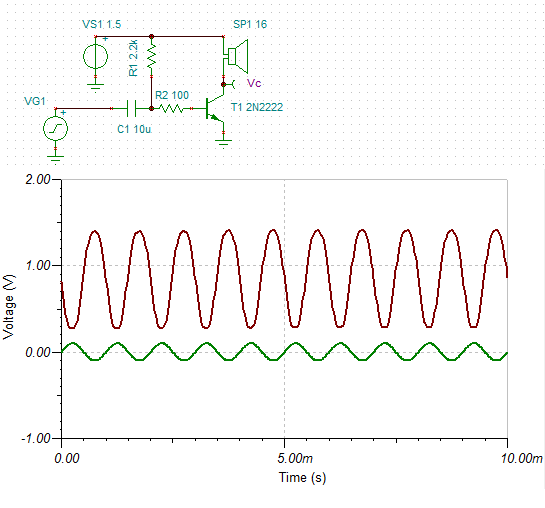 Yet Another Simple MW Receiver