This project focuses on the development of open-source, low-cost, waterjet-powered robotic speedboats for education and research

The initial jet design worked as intended but the nozzle and impeller were not optimized yet. The picture below shows a cross sectional view of the final jet design with an exploded view of each component below it.

The impeller has a number of key features, these being the number of blades, blade pitch, hub diameter, and the overall length. These measurements are best determined from experimental testing due to their performance being very dependent on the other features of the waterjet system. Therefore the design was made with the ability to easily change these features and test them. The impeller is printed with a D-slot that fits onto the key of the shaft.

Increasing the number of blades reduces the amount of flow separation on the blades, which increases the amount of torque transmitted to the flow therefore, increasing thrust. Efficiency also improves due to more of the flow being in contact with a blade which reduces turbulence in the flow. However, after a point, efficiency decreases as friction of the blade surface increases to the point where it outweighs the benefits previously mentioned. Increasing the size of hub diameters increases pump efficiency at lower mass flow rates by the majority of the work done on the flow being centripetal. It also increases the inter-row meridional velocity, which leads to more axial flow downstream. With a smaller hub diameter it is more efficient at higher flow rates, increasing the throat area which reduces the frictional losses. With changes to pitch the flow rate of the system increases, but it requires more torque from the motor, and therefore greater current draw. If not balanced correctly, it leads to a decrease in efficiency, so the ideal pitch is found from testing with the specific motor and nozzle design.

The design of the nozzle has two key features, the guide vane design and the reduction in area from the impeller to the outlet. 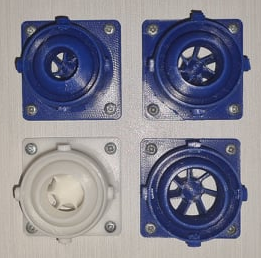 The guide vanes (stator) have the purpose of converting rotational flow to axial so as to improve the performance of the waterjet and increase flow rate. Guide vanes can vary in length and number. The number of vanes is best determined by the number of impeller blades as the two can have adverse effects such as resonance. In terms of reduction area, the greater the reduction the greater the change in velocity and pressure and therefore the increase in thrust. However, motor limitations lead to the flow rate and efficiency decreasing therefore there is a balance between impeller pitch and nozzle reduction.

Waterjets provide a force in line with the inlet which allows the hull to be propelled forwards, however, for it to turn the thrust needs to be vectored. This is done using the thrust vector shown in with a rotating section that is controlled by a servo. It has 60 degrees of rotation, with 30 degrees in each direction, allowing the hull to rotate. Waterjets aren't capable of running in reverse, therefore a reversing bucket was designed. This redirects the thrust so as to allow the platform to reverse but also steer with the bucket redirecting flows at a 45 degree angle. It also forces the water down at a 45 degree angle to prevent the buckets pulling the boat down.

A single waterjet setup identical to that on the boat was run with varying impeller designs and nozzle sizes at a fixed throttle input. This means that the theoretical RPM is the same due to the same PWM signal being sent to the motor, however the actual RPM varies due to the varying torque required. All measurements were taken from static testing therefore when the boat is moving the values will vary due to inlet velocity ratios. The important parts to consider from testing is the efficiency and thrust which is based on the current draw and the force measurements recorded using a load cell. With simple changes such as number of blades, blade pitch, nozzle diameter and hub size the results vary significantly. Analysing the first figure it is clear that the best result was a 4 blade, 40 mm pitch impeller with a 30 mm nozzle diameter which produced 4.5 kg of thrust at an efficiency of 38%. Looking at the second figure this impeller and nozzle combo performs very poorly which highlights the trade off between thrust and waterjet velocity. In terms of boat performance the trade off results in a balance between acceleration and top speed. A combination that offers a good balance is the 3 blade, 40 mm pitch impeller with a 25 mm nozzle. Further optimisation can be done to produce more efficient waterjets with a better balance therefore offering an opportunity for users to vary the waterjet design themselves and increase performance.

I'm just curious about this, and according to my research, jet skis and other jet-powered watercraft use similar systems to what you have here. Is it something about the location of the inlets and outlets, or something else that makes the impeller-reverse a no go?

I think this project is really cool, by the way!