A hat full of electrometers

A witch's hat band with a ring of gold plated electrometers.

My (adult) daughter asked me for help making a Halloween costume last year. She wanted a string of LED lights with pumpkins to wear on the hat of her witch costume.

I couldn't find a string of LED lights with pumpkins small enough for that use in the time available, so that plan fell through.

I thought it over for a while and decided that while I couldn't make little plastic pumpkins to put LEDs in here at home, I could make a string of LEDs that act spooky.

This hat band will use a string of orange LEDs connected to miniature electrometers. The electrometers will cause the LEDs to fade in and out or flicker at semi-random, depending on the charge of objects and people in the area.

This all started about a week before Halloween last year.

My daughter asked if I could put a string of LEDs on the hat of her witch costume - but she wanted the LEDs to be in little plastic pumpkins.  Such LED strings are available, but I couldn't find one with small enough pumpkins that could be delivered in time.

I'm not real good with 3D printed stuff, and I don't own a 3D printer, so just printing up a bunch of pumpkins was out of the question.

While trying to think up an alternative, I happened to see my Wimshurst machine up on its shelf.  That got me to thinking about static electricity, and that reminded me of eletrometers.  You can make electrometers with LEDs.  The electrometer reacts to the charge of objects around it.  If you put a bunch of them on a hat, then the LEDs will flicker and fade with the wearer's movements and the charges of people and objects in the area.

A fellow named William Beaty described a simple LED electrometer back in 1987.

There's not much to it:  A JFET, a resistor, an LED, and a battery.

I've picked some stupidly bright orange LEDs, and designed a small PCB with the required circuitry.  My version uses MMBF5484 JFETs instead of the MPF102, but it works just as well.

The circuit is pretty near trivial:

The PCBs I've had made have a gold plated front with the LED, while the connections and the other parts are on the back. 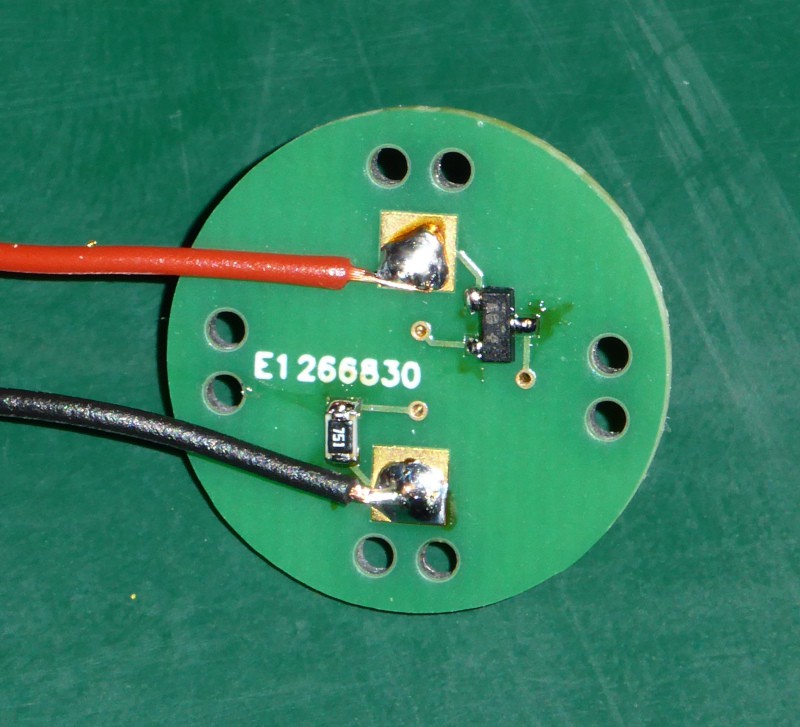 An LED-throwie which only activates at dawn or night. Add a magnet and you can stick it at metallic surfaces.
Project Owner Contributor