In this project, we shall learn the basic specifications of a servo motor and also how to operate a Servo Motor using a 555 timer IC, and a couple of pushbuttons.

Servo Motors are used in a variety of fields. These are mainly used as actuators in those areas where we need a precise movement to control output load.

The best example is an RC car. Let's see you want a movement of 45 degrees, not more not less. In that case, you can't use a simple DC motor because it will overshoot the desired position every time you power it up.

And thus we need a Servo Motor to achieve this task as it will not only make a precise 45-degree rotation but will also stop smoothly at the desired position.

There are many types of servo motors and their main feature is the ability to precisely control the position of their shaft. A servo motor is a closed-loop system that uses position feedback to control its motion and final position.

Technicalities of a Servo Motor

You must know what's inside it and how it works. a servo motor is made up of three key components:

There are total 3 wires that come out of a Servo Motor:

RED: To positive of the supply

Servo Motor can rotate 90 degrees in either direction, covering a maximum of 180 degrees i.e., either 90 degrees clockwise or 90 degrees anticlockwise from its neutral position.

The DC motor is a high speed and low torque but the gearbox reduces the speed to around 60 RPM and at the same time increases the torque.

A servo motor is controlled by sending a series of pulses through the signal line. The frequency of the control signal should be 50Hz or a pulse should occur every 20ms. The width of the pulse determines the angular position of the servo and these types of servos can usually rotate 180 degrees (they have a physical limit of travel). 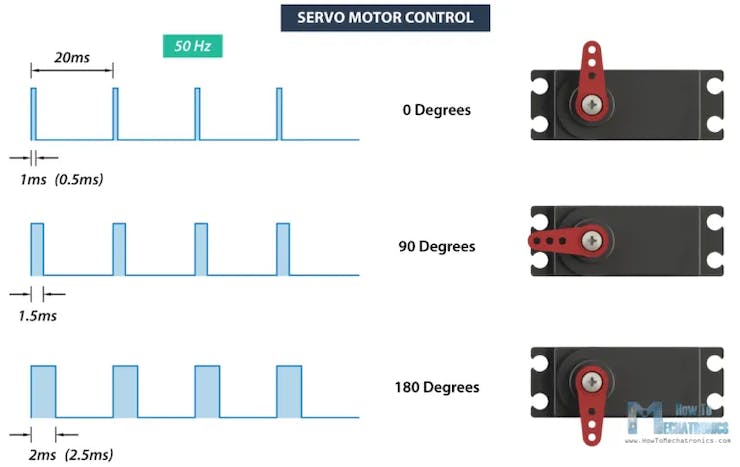 1. When the forward push button is pressed

When this case arises then a 68 K resistor get connected between discharge and threshold pin. Now initially capacitor is not charged so pin 2 is at 0 volt which is less than 1 by 3 of applied voltage.

This resets the flip flop inside the 555 and gives logic 1 at the output terminal at which the base of the transistor is connected.

This causes the transistor to turn on and conduct current directly to the ground due to which signal pin of motor get zero volt as this pin is directly connected to Collector terminal.

Since the capacitor starts charging when output is 1, the output becomes 0 as soon as the voltage across the capacitor becomes greater than 2 by 3 of applied voltage as it is directly connected to the threshold pin.

Now the transistor will be off and the signal pin will get logic 1.

In this way, PWM signals are generated at the reference pin of the motor. Now in this case on the time period of generated pulse is greater than 1.5 milliseconds, which you can calculate...