The default speed of the Raspberry Pi Zero 2 W is 1GHz. The speed may be increased to 1.2GHz or even 1.4GHz.

The default speed of the Raspberry Pi Zero 2 W is 1GHz. The speed may be increased to 1.2GHz or even 1.4GHz.

Set overclock values in the config.txt document to give your Raspberry Pi Zero 2 W a speed increase.

The powerful Cortex-A53 quad-core CPU on the Raspberry Pi Zero 2 W runs at a default speed of 1GHz. It's possible to increase the speed to 1.2GHz or even 1.4GHz. The increased performance makes Raspberry Pi OS more responsive, which is important when setting up Zero 2 W projects that are more demanding and might benefit from a boost (such as image processing or retro gaming). However, there's a danger that the Raspberry Pi Zero 2 W will overheat and cut back the CPU, keeping it safe but slowing down Raspberry Pi OS. 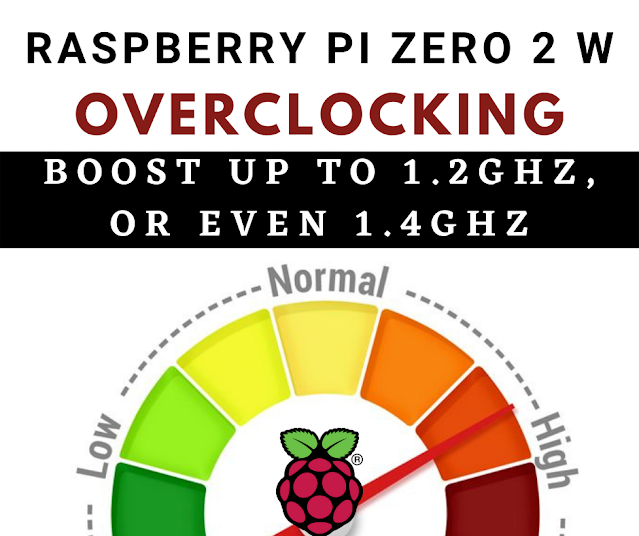 It's necessary to think about a cooling solution for the Raspberry Pi, as it is with any overclocking projects. However, overclocking is a lot of fun to play around with. So, let's spruce up Zero 2 W a little.

Zero 2 W should be kept cool.

Raspberry Pi OS must be updated.

Make sure you have the most recent version of Raspberry Pi OS installed. Open a Terminal window and type the following commands:

Keep an eye on your speed.

Take a look at the default CPU speed before we start overclocking. Enter the following commands in a Terminal window.:

Most likely, the terminal will return 600000. The speed in MHz is obtained by multiplying this value by 1000. The basic frequency is 600MHz (or 0.6GHz). The kernel has requested this speed. The real CPU speed may be lower if your Raspberry Pi is throttled due to low voltage or overheating.

The config.txt file will be used to specify a new upper limit for the clock frequency. Create a new Terminal window and type in:

Scroll to the bottom of the page to the section labelled:

Also, modify the options to:

The over_voltage command changes the core CPU/ GPU voltage and supports values ranging from -16 to 8. 0 is the default value. We've kept over_ voltage commented out for now because the current firmware in Bullseye will try its best to figure out the right voltage for an overclock. Use CTRL+O to save the file (hit RETURN) and CTRL+X to leave.

Restart your Raspberry Pi if it hasn't already.

Restart your computer to use the changed settings.:

Watch vcgendcmd when the system restarts to see your new, faster clock speed in action.

For dependable functioning, the supply voltage must be kept above 4.8 V. It's important to keep in mind that the voltage from some USB chargers/power supply might drop as low as 4.2 V. This is due to the fact that they are often built to charge a 3.7 V LiPo battery rather than provide 5 V to a computer.

You'll need a multimeter to measure between the VCC (5 V) and GND pins on the GPIO to monitor the Raspberry Pi's PSU voltage. The Raspberry Pi website has further information on power requirements: magpi.cc/powersupply.

Let's try going a bit quicker this time. The ARM CPU should be set at 1.4GHz. Only by including the over_voltage parameter did we able to get our Zero 2 W to run at this speed. Make changes to the config.txt file.

This is the maximum over_voltage we're going to go. When you reboot the Raspberry...