A project log for Straight wire and tube stock storage

A wrap storage pouch to organize piano wire, rods and tubes for modeling

As some of the stock is very thin, it could poke through the bottom pocket.  I used a second piece of thick fabric, and doubled it for the bottom 5".  The lower edge was attached by turning the edge of be the main fabric over it and stitching.  As this was the selvage (which I didn't remove), a single fold was sufficient.

This black reinforcement is entirely concealed in the pocket.

As I was using scraps, i didn't have a strip long enough, so just pieced them.

The 2 raw edges were partly bound by a single fold hem.  The second needed fold would occur later while making the dowel pockets.

The bottom edge was folded up 2.5" and pinned in place to make the bottom pockets.  The edges would be trapped in the edge dowel pockets, and stitches would be added to divide the pockets later

Next I laid out the elastic strips.  These didn't go all the way to the edge as that would create a bunch up when the dowel pockets were made.  Instead they were just long enough to capture in the dowel pocket stitching.  These were spaced 2" above the bottom pocket, then 12 and 24" above that.

I made slits 40" up from the bottom so that the dowels could be inserted/removed and folded the pockets over and stitched.  This trapped the elastic and bottom pocket ends.  The slits were needed because that pocket extends above the 40" into the top fold over. 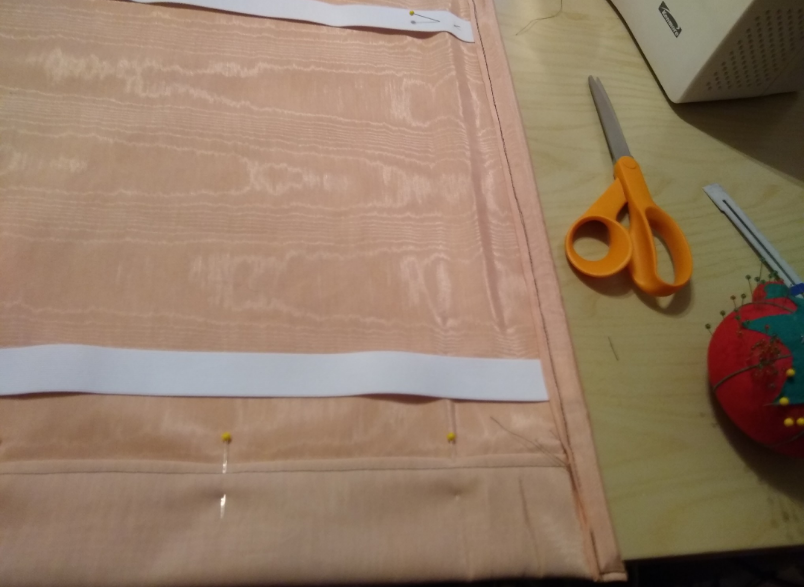 I tested out some pocket sizes with pins, and settled on 4 pockets at 2" wide, 4 pockets at 1.5", and the remainder at 1".  I did test 1/2" pockets, and while helpful for the piano wire, it made it much harder to get stock in.

After measuring out the same sizes along all three elastic strips, simple stitches separated them.  I went past both edges with back stitching to best reinforce.

As the bottom pocket doesn't stretch, i added a separation every 4"(or 3").  This was needed to keep it from falling down, and if one of the slots was over filled, it could spread a little more in the non-stretch bottom pocket. This created lots of tails to cut off...

To be able to hang the opened roll, I created a pocket in the top flap, a few inches above the fold over line (40" from bottom).  Before sewing, I cut and reinforced an opening in the middle.

I used fiberglass rods as the end dowels and hanging dowel.  As fiberglass will shred when cut, i first reinforce it by tightly wrapping with fiber reinforced tape, and cutting through it with a fine toothed hacksaw.

(You can see i used a scrap rod that was broken, i just cut off the broken end)

The end dowels generally don't come out, so nothing else was required there.  The top hanging dowel gets removed when not hanging, so I sleeved it with heat shrink to avoid tiny fiberglass splinters