A project log for Repairing a Delta-Q QuiQ Battery Charger

Sometimes when you throw money into a pit, you miss and hit the other side and actually save some.

The Zenn electric car comes with a delta-q QuiQ model 912-7200 battery charger. If mine weren't broken, I'd call it a pretty nice piece of equipment.

This particular model is a 72v, 12A DC (~1000W) charger designed for lead-acid batteries. Delta-q sells a wide variety of different voltages and amperages. It is a so-called an intelligent charger, operating in several different modes to charge batteries intelligently. It also has the ability to support several different charge 'profiles', changing the charge behavior for different battery types.

These chargers are, apparently, fairly common in electric vehicle applications. Examples include forklifts, golf carts, electric cars, and the like. And it is built in such a way as to support both on and off-board installation. Nice.

On my car, it was using an interlock feature to prevent the car from moving while connected to AC power, and I believe a temperature sensor connection.

There are more specs in the manual here. 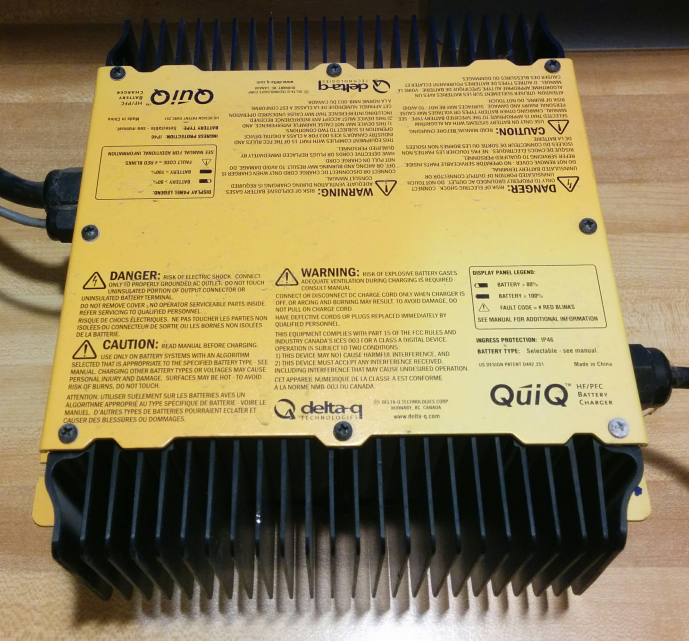 Operation of the charger works pretty much like you would expect. Plug it in, and it starts charging the attached battery pack. Leave it plugged in and it will go into a maintain/float charging mode. When plugged into AC power, it triggers an interlock preventing the car from driving away. However, in my case, it just makes a few clicks and ultimately does nothing. The interlock seems to work, and it appears to go through the paces of trying to charge a battery pack, but I see no increase in battery pack voltage, and very AC watts drawn, both of which would indicate charging.

I initially thought that perhaps it was set for a very different battery chemistry, which would cause it to not charge, thinking that the battery pack was already full, or so low that it wouldn't try charging to prevent damage. Setting the battery type is a fairly interesting process. You start with the charger disconnected from the battery pack. Connect to AC power and wait for a few second, it will then use the LEDs on the side to flash the battery charge algorithm number. Once it does that, connect the pack for a few seconds to put it into a 'programming' mode, and then touch the battery connector for a moment to cycle one step through the installed battery profiles. Perform no action for about a half-minute to indicate you are done, and it saves the settings to its internal flash memory.

So like I said, when I took a look at mine, I assumed it wasn't charging because of a different battery style. So I went through the programming process and found that it was configured for the 'Discoverer AGM' battery pack, #43. Which would make sense as that was the original battery pack sold with the car. However, that did not match the old Interstate flooded cells in the car. Apparently whomever put those in there didn't think (or even know) to change the battery charge profile from a gel battery to a flooded battery. Well, since mine was now a flooded cell pack, I changed it to the 'Trojan 31XHS' flooded battery pack model, #5, with float finish. This most closely matched my new Exide pack. There was also algorithm #62, which is a DV/DT finish, but my charger was not programmed with that one.

Well, enough about the charger, why won't it work?