[T] ​Thoughts over the past few weeks

A backpack that strives to be as convinient as an ingame player inventory.

The past week or two, I've been trying to recompute a solution. The tough part of all of this is that this project is more of an optimisation problem instead of creating something that just doesn't exist. Well, some features I'd like to incorporate do exist but only in rare circumstances. This log might be a bit hectic; it's the first log that has taken me multiple days to write.

Anyway, the first thing I've been thinking of is the shape. Up until the past 28 days or so, I've been thinking that the second concept idea would be a square prizm, but with the #T^2 TyMist [gd0138] being cylindrical now and #TEOSS [gd0037] expected to be redesigned with a slot-like design (I haven't yet modelled it to see if I like it), I was thinking of going with a cylindrical base shape. Coincidentally, the most favourite backpack I've ever owned (but was short lived because the strap broke) was this cylindrical backpack: 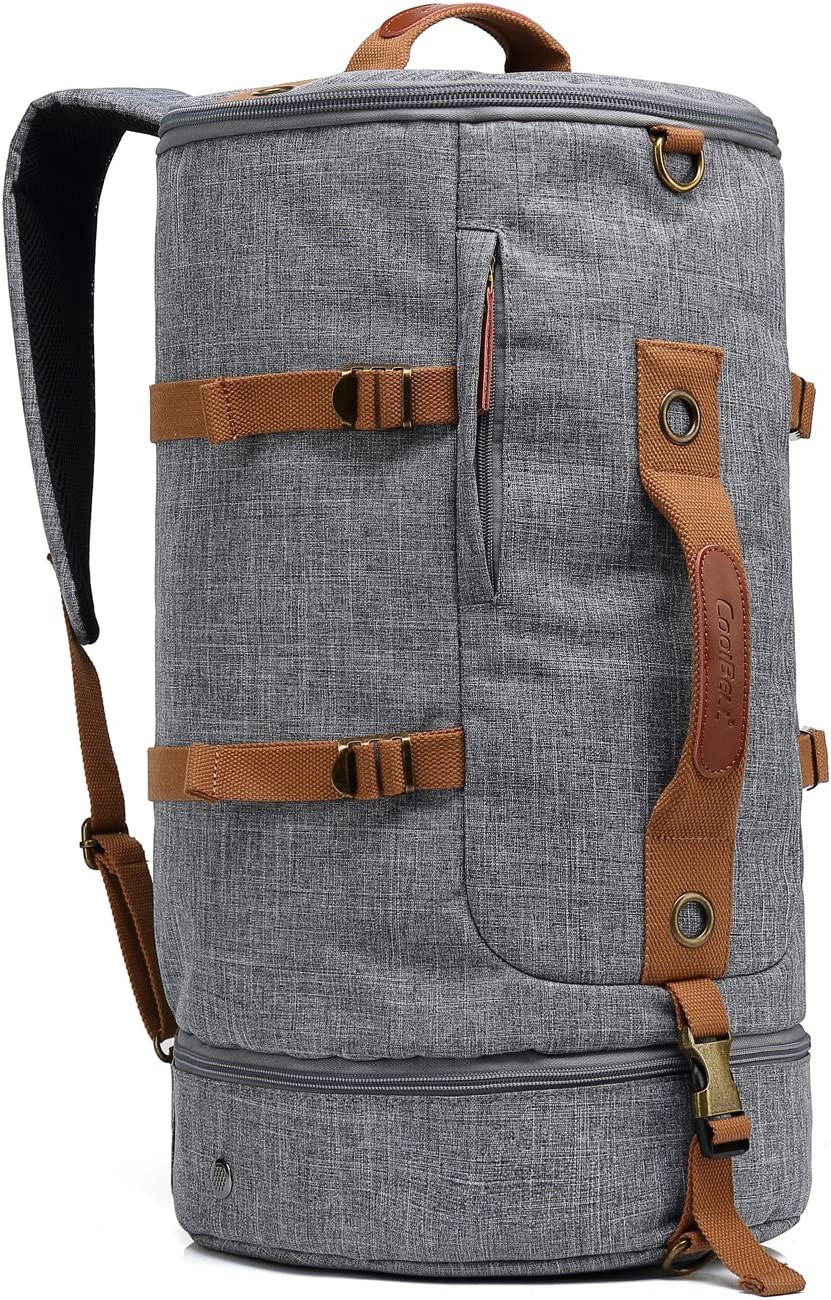 Back in late 2018, I planned to buy some copper PETG and print an internal frame so that it was always cylindrical like in the images. Well I never got around to that and now I've learned that it's best to design in CAD before buying a £63 roll of Extrudr PETG. I've only used like half a metre of this massive 30cm roll, and it was a reason why many of my current projects have copper accents.

I also wanted to put a low cost tablet to show animations on that bag. With this project, I'm thinking of going with a strip of LED matrix panels.

I've also been thinking of ways that the backpack could carry my singular extra large "Bag For Life" supermarket grocery bag, and thought about "cutting the middleman", which in this case is making the backpack also the shopping bag. I looked on google and it turns out I'm essentially trying to make a "shopping trolley" that has the rigidity of a suitcase, the suspension of a hoverglide and a body harness with a grappling lift (which I'll write about later). I knew I should've written this log earlier, because whilst looking for the above example image, I found out that even getting over curbs and steps is a solved problem:

One of the reasons I didn't want to go with a cylinder was because #Teti [gd0022] isn't and I expected the diameter to be rather large. It's actually prretty close to TyMist's diameter, so I might actually have Tetinventory use the same diameter as TyMist: 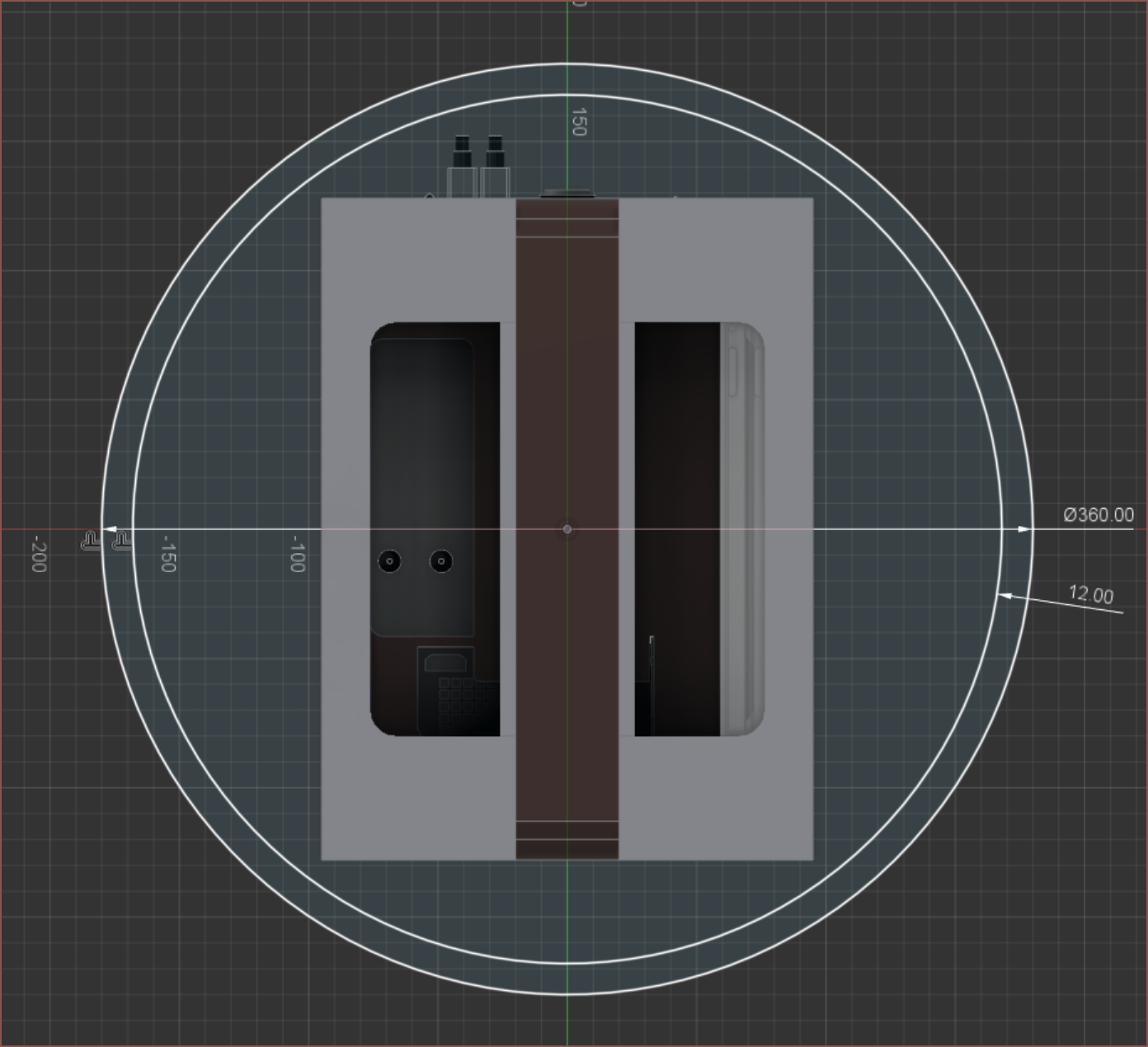 Now the thing is that a 360mm backpack is quite large. It's probably a fine amount of space for groceries though.

First round of ideas

I was thinking of having tether cables over on one semi-circle side to achieve feature [lower/raise bag from floor] until I eventually remembered that the bag would be raised from the centre of gravity, which will likely mean that the bag will hit my legs. Now, if this impact is nice and slow and ordered, I don't imagine this being a problem.

There's still another problem which is that the bag now may not be aligned to the suspension rails (the thing that the bag will slide on whilst bobbing up and down). I might have to add some extra sections around the main bag to be able to go with this "space lift" idea, having 4 cables roughly equidistant. A possible issue with this idea is the cables getting twisted, leading to chaotic behaviour.

I was also thinking of a relatively tall bag such that it could be lowered and the wheels would be in contact with the ground whilst the top of the cylinder is in contact with the bottom of the strap half. I'd imagine I would look vaguely like a humanoid robotic wasp. I have a feeling that the bag would have to be quite tall to work.

Another idea was to have a pogo-like stick with a wheel at the bottom so that the cylinder can be at normal backpack height.

With those inital thoughts, I decided to explore the cable method more since I belive that the [hoverglide suspension], [no-hands suitcase rolling] and [bag entry without dismounting] features can all be solved with the same system.

Second round of ideas

Since my compartment choices are between an extruded square or circle, I'm thinking of adding enough wheels to make the compartment orientation agnostic when rolled. When cornering too sharply or hitting a curb too quickly, my wheeled backpack can obtain angular momentum and tip over to a side. Since the thing connecting the straps to the compartment needs to be flexible for the [bag entry without dismounting] feature, I'm expecting unexpected rotations to occur often.

This idea requires that whatever is holding the compartment to the straps is either connected to the top centre or rotates around the centre.

Rope that can switch from flexible to stiff

It seems [suitcase rolling] and [bag entry without dismounting] require different attachment methods for the compartment. For suitcase rolling, the object connecting the stap-half to the compartment-half needs to be rigid except for a single hinge point, similar to the hinge between a trailer and truck. However, there's no possible way of getting into the bag unless the object can flex so that I can turn around and open the bag. The object also needs to be stowable for when the compartment is in [hoverglide suspension] mode

What I need is some kind of artificial rope that can switch from stiff to flexible. I'm fine with requiring that the rope is straightened out before being stiffened. Additionally, it only has to be stiff enough that the compartment section doesn't roll straight into my legs when I'm going down a hill or just slowing down.

I've learned from this project log from Detail that there exists a fluid that can change viscosity in the presence of a magnetic field. I'm not sure if I could install an electromagnet across an entire hose that contains this fluid, nor do I know how expensive the fluid is.

My current idea is a set of 3D printed linkages that has 2 wires going through them all. Those are power wires for low cost solenoids (or maybe servos) that will allow a spring-loaded shaft to slot into a hole, preventing the linkages from rotating and essentially turning a flexible chain into a rigid one.

Depending on how quiet and light a suitable pump is, it may also be possible to pressurise a hose to stiffen it, similar to an airbed.