In this post, we organize the key components from the previous posts into an architecture diagram. Along the way, we identify a few new components.

None of what’s shown here is set in stone. The diagrams below contain some speculative pieces and there are quite a few loose ends to tie up as we get further into the project. 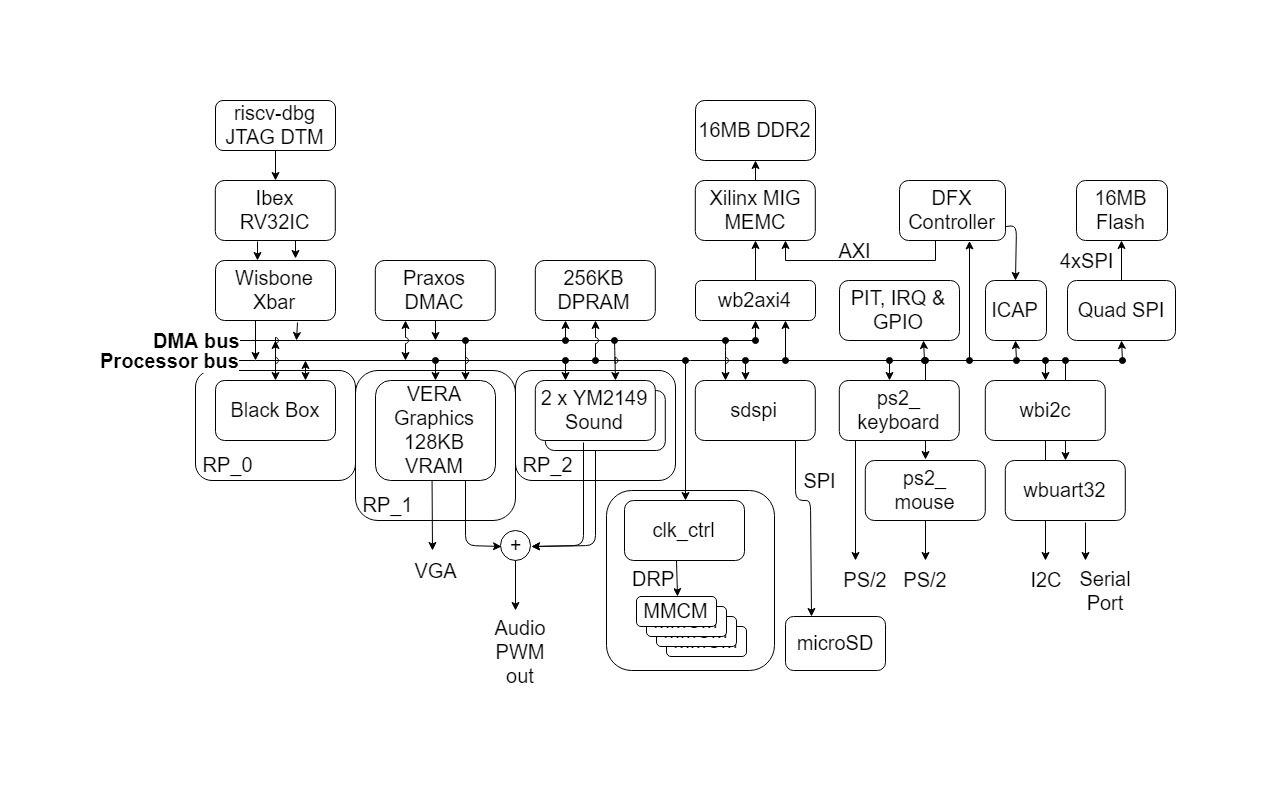 The system is configured with 256KB of Dual-Port RAM (DPRAM) and 128KB of Video RAM (inside the VERA module). The A7-100T has 607KB of Block RAM in total, so more than enough Block RAM should be left over for other purposes, e.g. for the Black Box Module (see below).

The CPU has memory-mapped access to DPRAM. As long as no other Bus Masters are competing for access to the same bus, instructions executing from DPRAM will have a fixed cycle count.

The DPRAM is hooked up to two system buses: a DMA bus and a Processor bus. Bus masters (currently only CPU and DMAC) have access to both buses as well, but the intent is that the DMA Controller uses the DMA bus for MEMC<->DPRAM transfers and the CPU uses the processor bus for DPRAM access. This intent is not hardwired into the system, however. The DMA Controller can set up transfers over the processor bus, and the processor can access external memory over the DMA bus. The two system buses are there to give bus masters some flexibility to stay out of each other’s way.

Note that, besides access to external and internal memory, the DMA Controller also has access to VERA, the sound cores, and the SD SPI module via the DMA bus.

Both the Processor Bus and the DMA bus are 32-bit pipelined mode Wishbone buses.

A bus on a block diagram is just a line connecting blocks. In reality, the Interconnect consists of Cross Bars, Arbiters, Address Decoders, and Bridges. I will follow up with an architecture diagram showing the BoxLambda Interconnect details.

To build the Interconnect, I will make use of the components contributed by the gentlemen below:

The Ibex CPU configuration is shown as RV32IC, the I and the C indicating Integer and Compressed instruction set, respectively. I would like to include the extensions for integer multiplication and division (M) and bit manipulations (B) into the build as well. Those extensions are going to take up a considerable amount of space, however, and will also have an impact on timing closure. I’m going to defer the decision on those extensions until we have more insight into this project’s FPGA utilization and timing.

The Black Box, and other Reconfigurable Partitions

The Black Box Partition is an empty area in the FPGA’s floorplan. This is where you can insert your application-specific logic. Do you need hardware-assisted collision detection for your Bullet-Hell Shoot’em Up game? Put it in the Black Box. A DSP? A CORDIC core? More RAM? As long as it fits the floor plan, you can put it in the Black Box region. The Black Box has bus master and slave ports on both system buses.

VERA and the two YM2149 cores are also placed into their specific Reconfigurable Partitions (RP_1 resp. RP_2), so you can swap those out for a different graphics and/or sound controller.

Reconfigurable Modules require a reconfigurable clocking strategy. That’s the role of the Clock Control (clk_ctrl) module. The BoxLambda Clocking Strategy is a topic for a future post.

A few new modules popped out of the woodwork:

The Memory Controller is equipped with an AXI4 port. That’s convenient because that’s also what the DFX Controller uses to fetch the Reconfigurable Modules’ bitstreams. To hook up the system buses, we use a Wishbone to AXI bridge. This bridge will introduce additional memory access latency, but that should be acceptable because this path should not be used for latency-critical operations.

Note that the CPU has memory-mapped access to DDR memory and can execute code directly from DDR memory. DDR memory access is not fully deterministic, however. CPU instructions executing from DDR will not have a fixed cycle count. 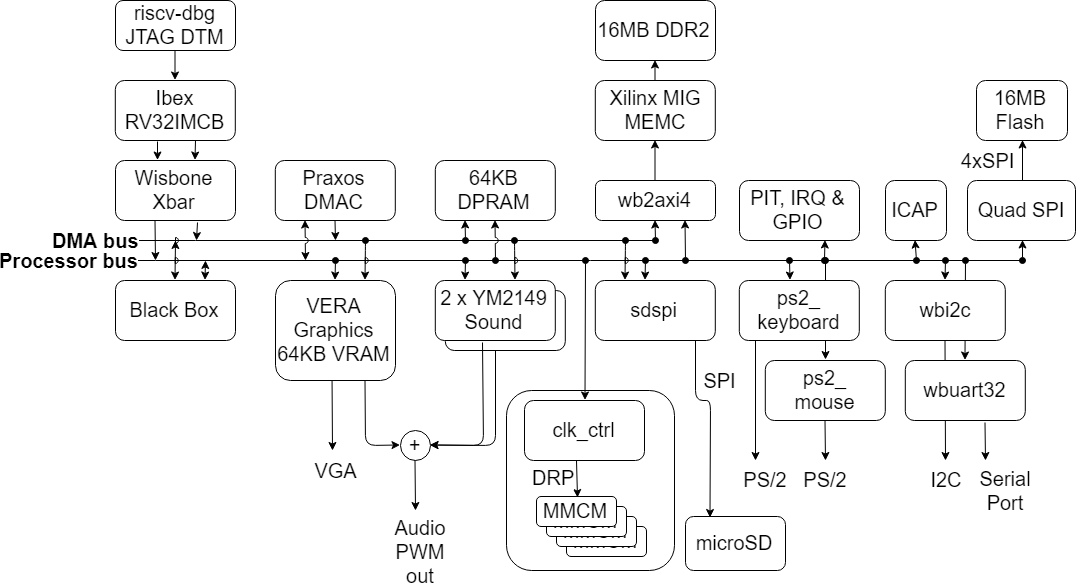 This is a draft architecture diagram showing the Arty A7-35T configuration.

DFX is not supported on the A7-35T. Neither is the Hierarchical Design Flow. This means we have to stick to a monolithic design. The RTL for all components is combined into one single design, which is synthesized, implemented, and turned into a single bitstream. There is still room for RTL experimentation in this build, but you won’t be able to live-load it. It’s going to require an update of the Full Configuration Bitstream.

All other components are the same as in the Nexys Configuration.

BoxLambda users can make up their minds on how they want to set up this system. Here’s one possible software configuration:

This post has briefly introduced several new concepts, and also raises questions on topics not mentioned so far:

All of these topics will be further explored in future posts.

https://mega65.org/: BoxLambda is not the only retro-style computer that runs (or rather, will run) on a Nexys A7. Who knows, maybe someday BoxLambda will fit in the super-sexy MEGA65 form factor.