Our CPU supports the following interrupts (taken from https://ibex-core.readthedocs.io/en/latest/03_reference/exception_interrupts.html):

We’ll be using this timer module implementation, so we don’t need a separate PIT module.

The Timer module flags interrupts via signal irq_timer_i. The CPU sees this as IRQ ID 7.

We can freely assign 15 local interrupts. I’ve got the following list:

The interrupts are serviced in order of priority, the highest number being the highest priority.

I have ordered the Fast Local interrupts as follows:

One interrupt line is reserved to connect an external interrupt controller. I don’t have any use for it right now, however, so I’m going to leave this unassigned for the time being.

Since we currently don’t have a use for the Programmable Interrupt Controller, I’ll remove it from the Architecture Diagram.

I could keep adding modules and dream up architectures all day long, but some kind of reality-check is long overdue. I’m going to create a fork of all modules identified so far and run them through synthesis, as-is, just to get a sense of the resource utilization on the Arty A7-35T and the Nexys A7-100T. We won’t get more than ballpark figures out of this, but that’s all we need right now.

The synthesis tool turns a module’s Verilog/System Verilog/VHDL source code into a netlist of gates. In the process of doing so, the tool also generates a utilization report, relative to the available resources of the target FPGA. It’s this utilization report we’re after right now, not the generated netlist.

Here’s an example utilization report, generated during the synthesis of the MIG core:

For most of the cores, synthesis was just a matter of pointing Vivado to the core’s source tree and hitting the Run Synthesis button. There were a few exceptions:

I organized the utilization numbers from the different cores into a table and compared them to the available resources on the Nexys A7-100T and the Arty A7-35T. The results are shown below.

I added a 20% margin overall for the bus fabric and for components I haven’t included yet.

Overall it’s an easy fit, with room to spare. All the pressure is on the Block RAM. Slice utilization (registers and combinatorial logic) is low.

On the Arty A7-35T it’s a tight fit. Actually, the Block RAM doesn’t fit at all. If we reduce the amount of DPRAM to 64KB and reduce the margin on Block RAM to 10%, we can just make it fit:

Slice utilization is also fairly high. This might lead to some routing issues down the line. Still, these numbers are good enough to keep the Arty A7-35T in the running for the time being, at least as a kind of development/prototyping platform. I’m not ready yet to spend the cash on a Nexys A7-100T.

Based on these synthesis results, I settled on the following modifications to the architecture diagrams: 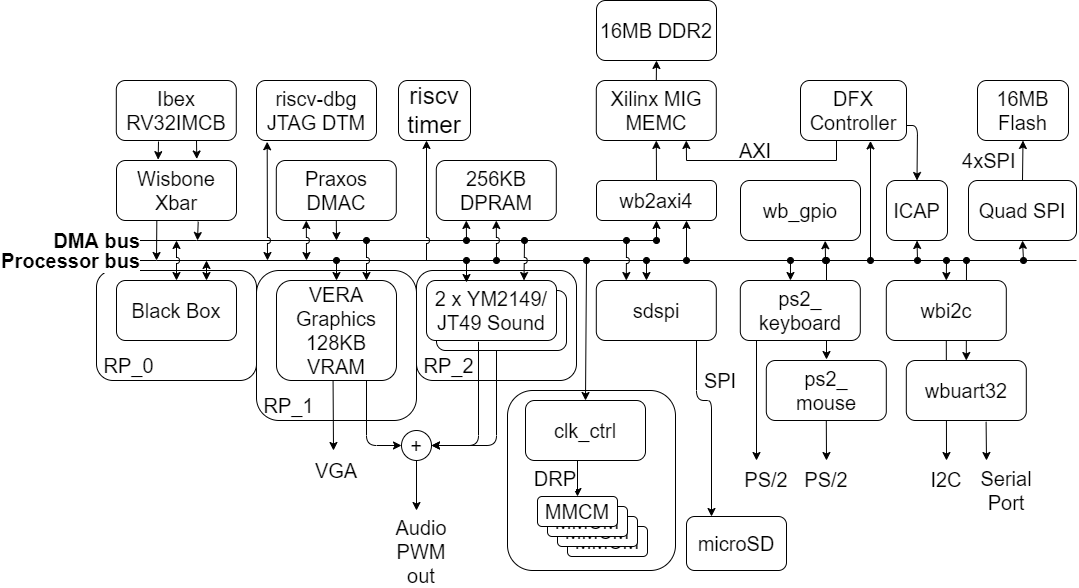 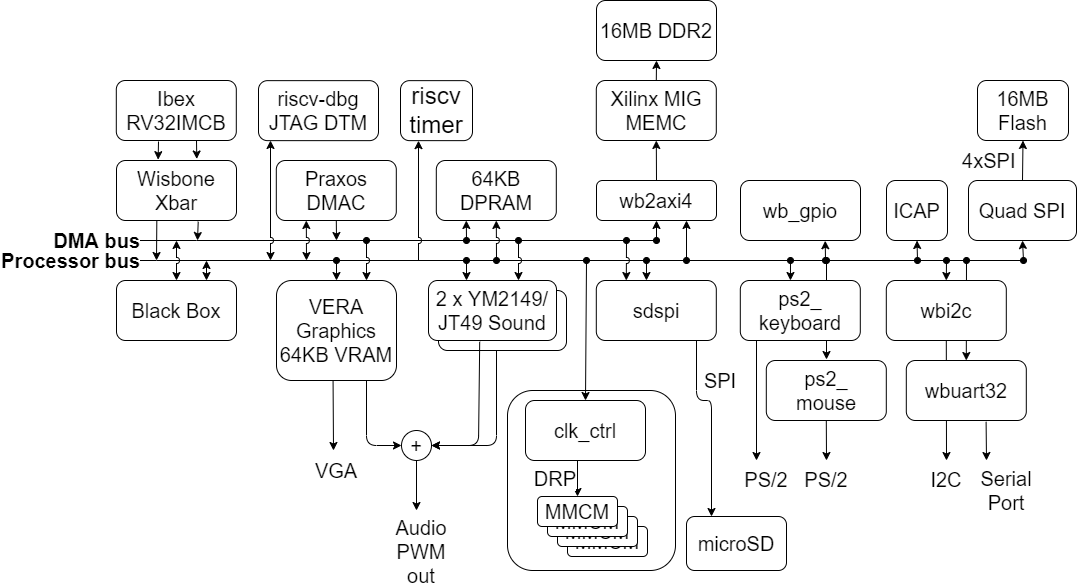 https://www.linusakesson.net/scene/parallelogram/index.php: Linus Akesson once made an FPGA-based demo. To do that, he created an FPGA-based computer, with a homegrown CPU, shader, and synthesizer. When I grow up, I want to be as cool as Linus Akesson.