Vivado has an embedded, Tcl-based command-line interface. For every GUI action, there’s an equivalent Tcl command or set of commands. My initial approach to creating a build system was to use a combination of Makefiles and Tcl scripts to get Vivado to generate a so-called IP Package for each component. These IP Packages then constitute the building blocks of our system: IP Packages can be aggregated into bigger IP Packages. A top-level project build aggregates IP Packages into an SoC.

This approach has some advantages:

Along the way, I learned that Vivado IP Packages also have some disadvantages:

That last item is a deal-breaker for me. I start looking for other options.

FuseSoc is a package manager and build system for HDL code. HDL builds can be retargeted from one EDA tool to another with the flip of a switch, so to speak. The tool is already in use by projects such as Ibex, and it looks very promising, so I decide to give it a shot…

Creating a so-called FuseSoc core file, a manifest defining the component, is easy enough. Once you have such a core file, you can instruct the tool to generate, for instance, a Vivado or a Verilator build for it. The problem is, I have no idea how it works. When I kick off a Fusesoc Verilator build, I get a nice OK message at the end, but I have no idea what that means, or what happened along the way. It’s also not clear to me how to customize the flow to accommodate use cases that are not already built into the tool. I see there’s a hook mechanism, but it’s not documented. Overall, I’m not in control of this build system. I just have to hope that FuseSoc does the right thing.

FuseSoc has a lot of potential. It works for a lot of people (e.g. Ibex), but in its current form, it’s not a good match for me.

Where FuseSoc aims to control the entire flow itself, Bender aims to do just one thing: Dependency Management for hardware design projects. Bender itself is not a build system. It’s a tool that feeds the build system.

Central to Bender is the package manifest bender.yml. In the manifest, you specify the HDL sources that make up the package, dependencies, include paths, targets (e.g. synth, sim), and associated defines. A package directory is a directory containing a bender.yml file. When you run bender in that directory, you can ask it to generate a flat list of all the sources from the current package, and the packages it depends on. Optionally, it can generate that list, plus any defines associated with a given target, as a Tcl script. This makes integration with Vivado very easy.

You can of course do all those things yourself using Makefiles and shell scripting, but it’s very tedious, and you know you’re reinventing the wheel for the umpteenth time. Bender absorbs a lot of the hassle of creating a build system, but you are still in the driver’s seat.

That’s good enough for me. I’m going for a Makefile-Tcl-Bender combo build system. 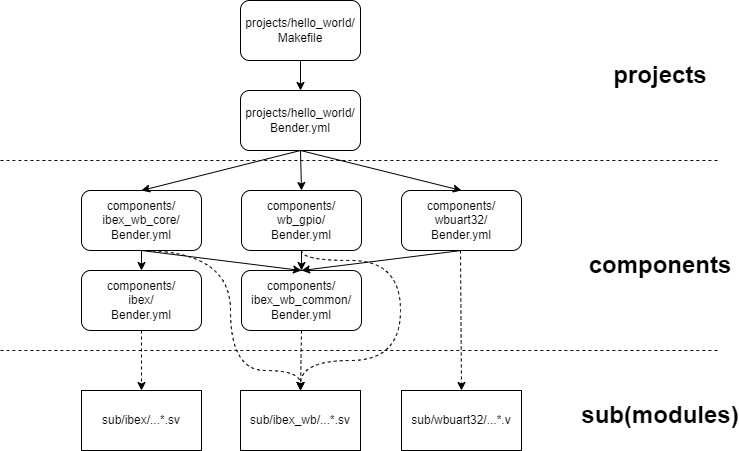 Project View of the Build System

The build system has three layers:

I reshuffled the repository’s directory structure a bit to reflect the three layers:

A project directory, such as projects/hello_world/, contains a top-level Makefile, with the following build targets:

What happens when you run make synth

When you run make synth, the following happens:

When you run make impl, the same thing happens, but after completing synthesis, the vivado.tcl script proceeds to kick off implementation and bitstream generation.

The relevant files are linked below. To avoid repeating identical rules and variables across Makefiles, a build_sys/common.mk include file is created which contains all reusable Makefile logic.

Components can also be synthesized, in Out-Of-Context (OOC) Mode. In OOC mode, the synthesizer is made aware that the top-level module’s input and output ports are not tied to chip pins, i.e. that this is just a partial build. A component Makefile works the same as a project Makefile, but with an OOC Makeflag set and propagated to Vivado. 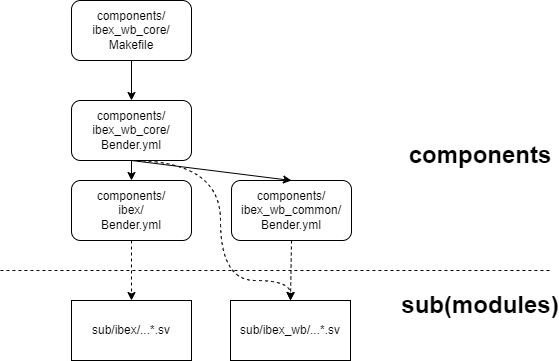 Component View of the Build System

Memory files used by an FPGA build are typically generated from software. It would be annoying to have to build the hello world program, to generate a memory file, and then build the FPGA in a separate step. As a rule, a build system should start from sources, not from build artifacts created separately by other build systems.

To combine the software and FPGA build steps, the build system has a pattern rule for .mem memory files. Whenever the build system encounters such a file as a dependency, it goes to that file’s directory and runs make there, to make sure that the .mem file gets generated.

The current mechanism just assumes that the default rule in the recursive make will do the right thing. It’s a bit crude, but it’s a start.

The second iteration is complete. We still have a working hello world proof-of-concept project, but now it’s generated from an actual command-line-driven build system.

I did make a small change to hello.c: After printing out Hello world, the program goes in a loop toggling the LEDs. This way, the program exercises the GPIO core as well as the timer core in addition to the UART core.

To build the project:

In the Beginning Was the Command Line : A famous essay by Neal Stephenson about command-line interfaces vs. GUIs, closed vs. open source, and Apple vs. Microsoft, among other things.