With an embarrassing failure that was the first PCB behind me, I went ahead and fixed the design somewhat: 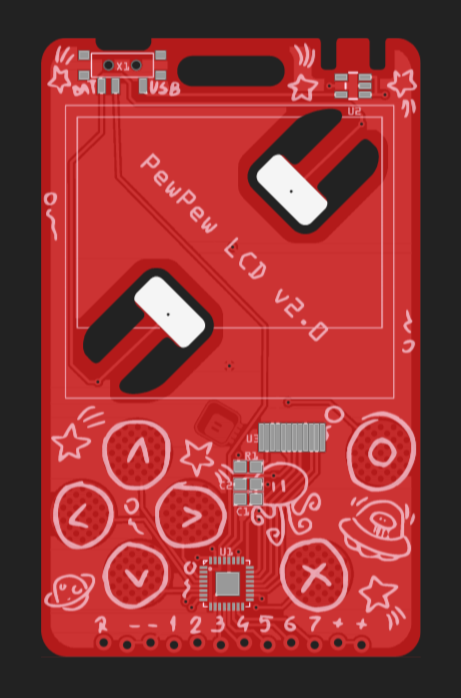 The flex connector for the display is now outside the display's outline, the microontroller had to be moved, the USB is now flipped to correct orientation. I ordered this time at @Elecrow because they had more choice of colors for the 0.6mm thick PCBs, and the quality seems to be better. A month later I had the first working prototype in my hand:

I adapted the software I used previously on the #PewPew OLED – the displays are pretty similar in how they handle pixels. One problem I encountered is that while the driver chip has the commands to flip the display 180°, and the breakout module I used to test them worked fine, the cheap displays I got for the device ignore those commands – I'm guessing they don't actually use the same driver chip, but some cheaper alternative.

Fortunately this wasn't a huge problem, because displayio can rotate the display in software, and my own driver code can easily just output the pages in reverse order.

Mechanically there are a few small nits to pick in the design, but that is not going to change anything electrically. I discovered that I don't need the backlight resistor – you can see a solder blob in its place on the photo. The display itself is a little bit shifted to one side, about one millimeter – I will need to correct that. I will probably also change the way the traces go to the d-pad pads, so that it's harder to touch the traces instead of the pads. Finally, I'm thinking about adding some holes under the display to make it easier to glue it to the PCB. All of those are minor adjustments, though.

Indeed,  you have a valid point, the cost of tactile buttons is kind off expensive compared to other electronics parts, offering a deluxe version with buttons is a good idea.

Then again, #PewPew M4 already exists and runs all the same programs as this one.

Nice design!, I been following your other post, I am looking forward to buy one when it is available, perfect excuse to practice python, I always want to make something in python but I keep postponing it.

I have to say it, I´m not big fan of touch buttons, I understand why you use them and it makes sense, but maybe living the pads to solder some small buttons, can be an option?

Thank you. It will probably be some time before they are on sale, due to chip shortage.

I'm not a fan of touch buttons either, but I'm also not a fan of the 50g tactile switches that are common for electronics like this. I have found some lightweight 7g switches, but they would probably be too expensive for this. I can't really add pads for buttons, because I don't want the users to be touching solder — even if unleaded solder is used, it's still not something you want to keep touching. Maybe I will make a "deluxe" version, with buttons, battery holder, and USB socket and a case at some point.