The "unique" piece of hardware in this design is the MyMenu card.

The MyMenu card has an MCP23008 I2C port expander. This is necessary since the menu system needs at least three buttons and there are not enough pins on the QT Py or XIAO RP2040 cards to have three buttons on three separate pins.

Three Buttons on one Analog Input

A resistor tree with switches could be used to convert the three switches to different voltage levels and input the line to a single analog input - like this: 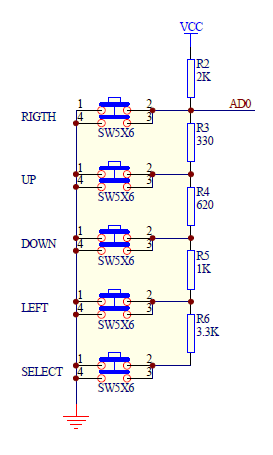