An open source label maker that fuses together both old and contemporary technology to create something as ubiquitous as... EMBOSSED LABELS!

The embossing process has been undoubtedly the most challenging part of the project, so I wanted to make sure that anyone making their own E-TKT would not struggle as I did.

These are the most critical steps:

Now for the involved components: 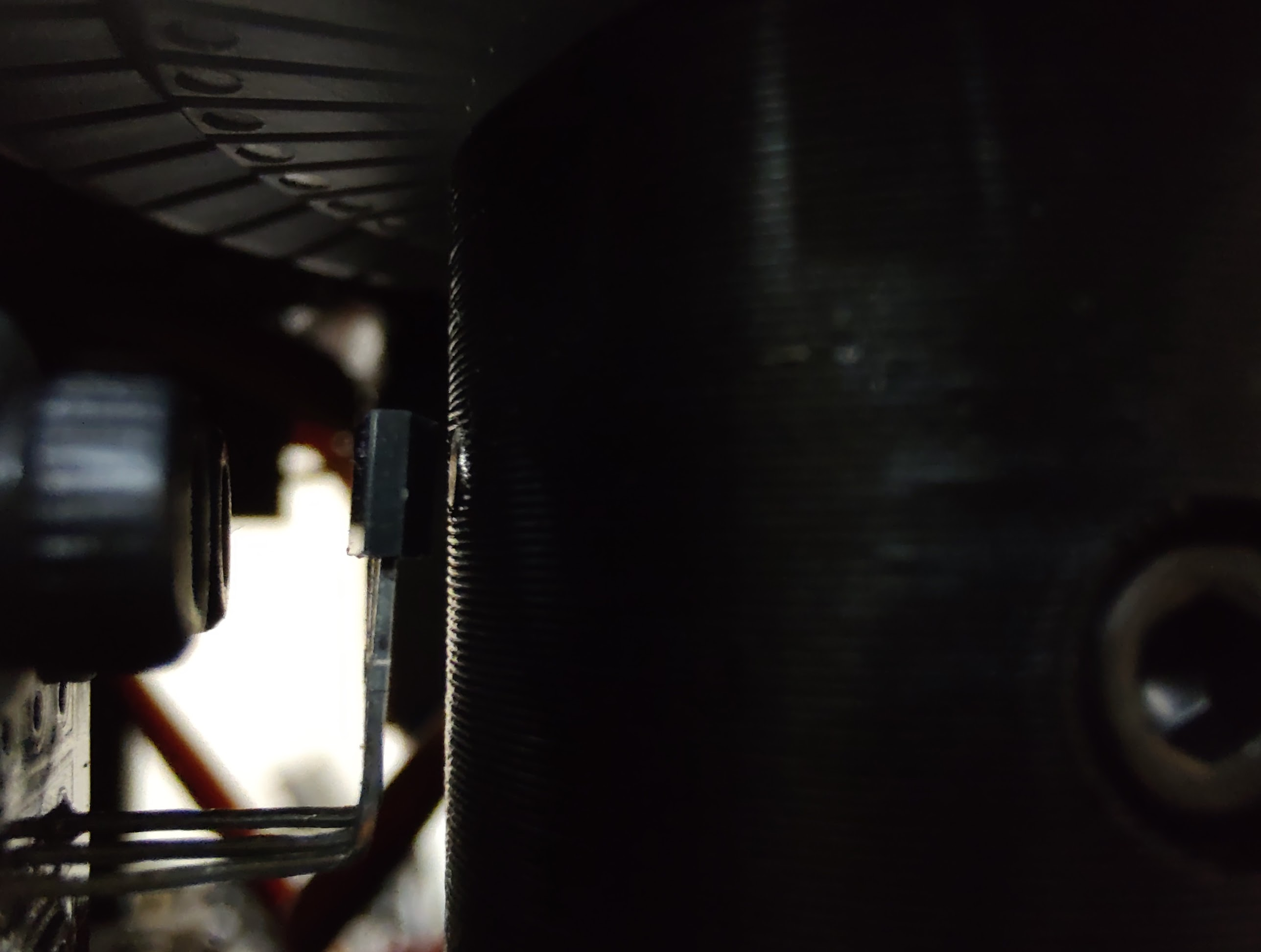 Depending on the hall's lateral position, the rotating magnet might activate the sensor earlier or later, impacting lateral character alignment.

The main issue that happens with that misalignment is the skewed / italic aspect for the character, because the letter is not pressed when perpendicular to the tape (remember it is a rotating wheel). This is the first issue that must be solved. 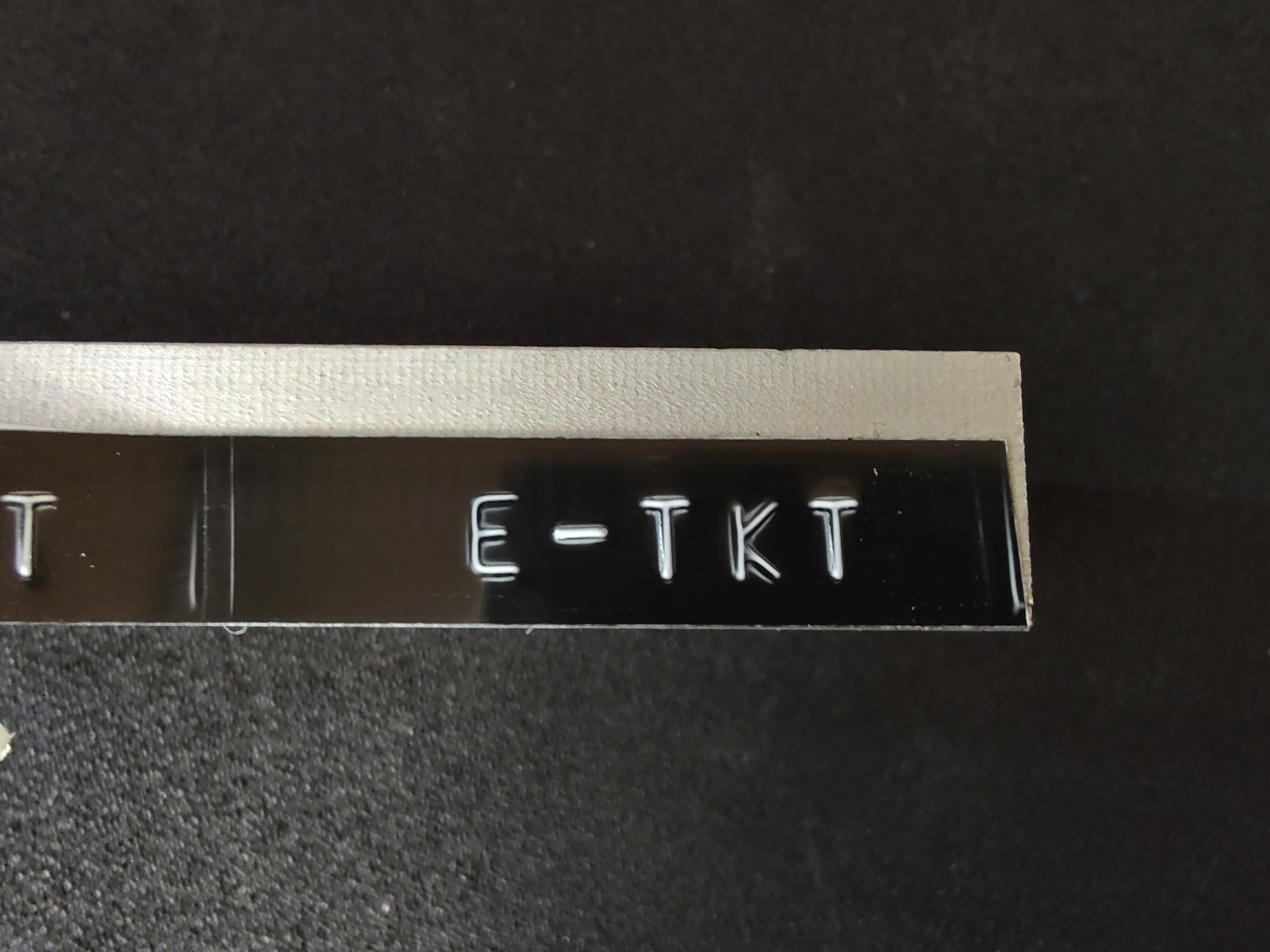 ⚠️ It will be highlighted on the instructions the need to make sure the hall is as centered as possible visually before moving on the assembly. 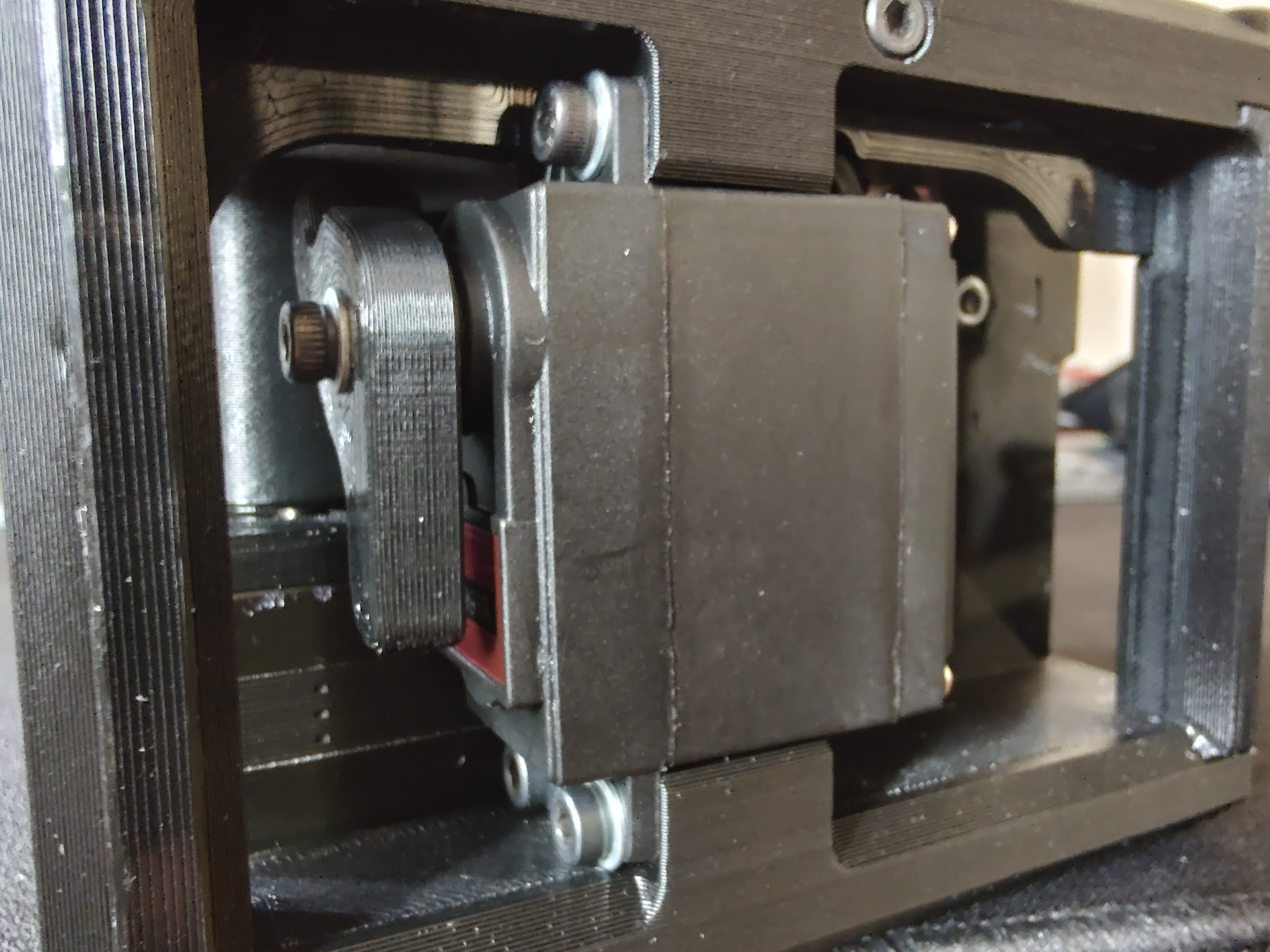 There are three factors into the equation:

Also, depending on the servo used, the distance from the servo to the daisy wheel tooth might change. I'm providing different models that can be experimented to address that. Or, since the STEP files are open, anyone can modify it to match their needs.

In general, all factors above can make the letters vanish on their sides. 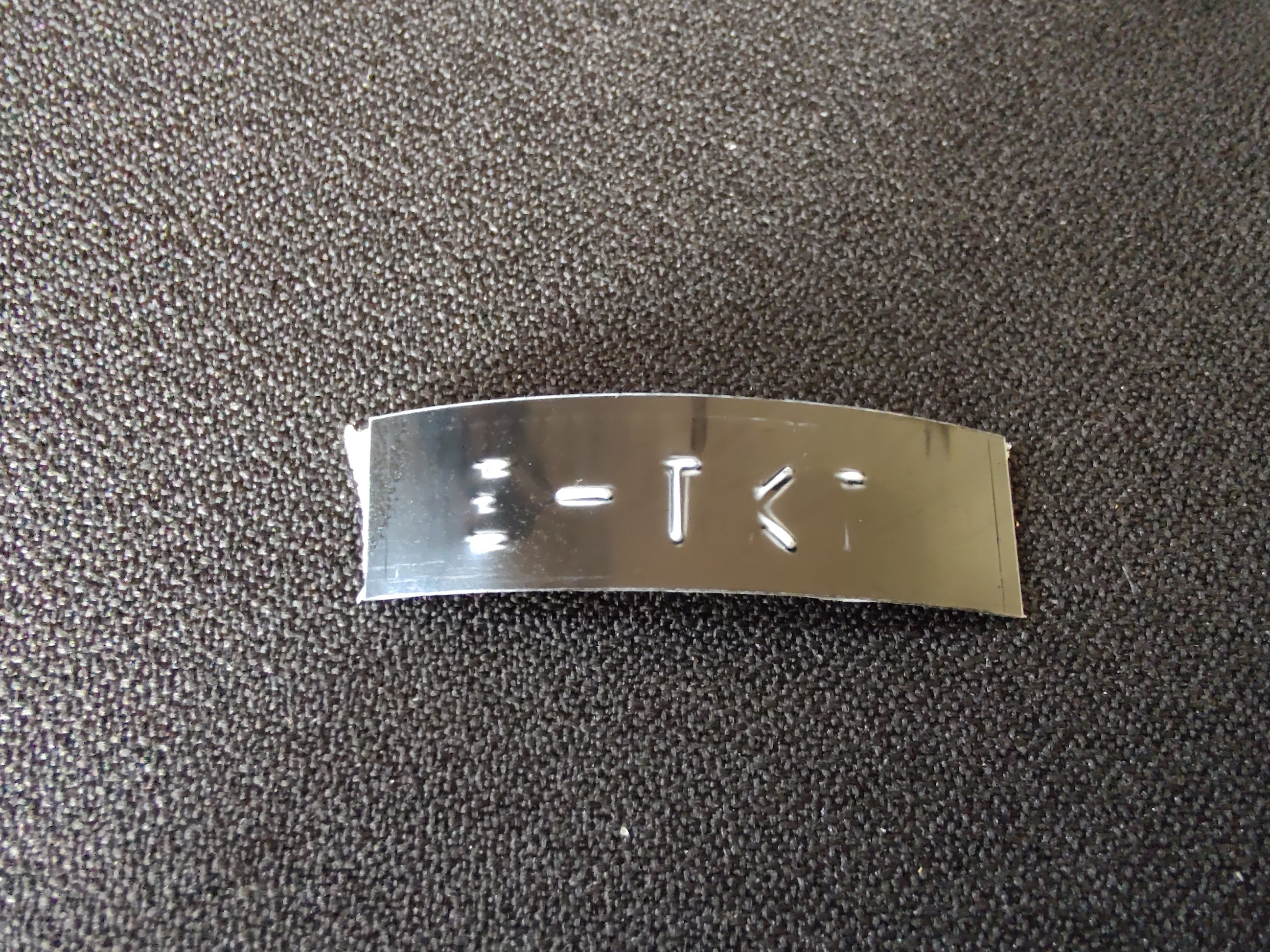 For addressing that (and the skewed / italic effect), I have created a calibration procedure that have two main moments:

1 - During assembly / firmware, where the parts' rough imprecisions are to be visually adjusted (without wasting tape).

The standard values are working on a cheap MG996-R servo (I'm pretty sure mine is a ripoff).

2 - After assembly, by testing with the actual embossed label with more precise adjusts.

The fine tuning is possible thanks to the SETUP menu in the web app. It is very frustrating adjusting values every time by code and flashing and that's why I though about that easily accessed screen. 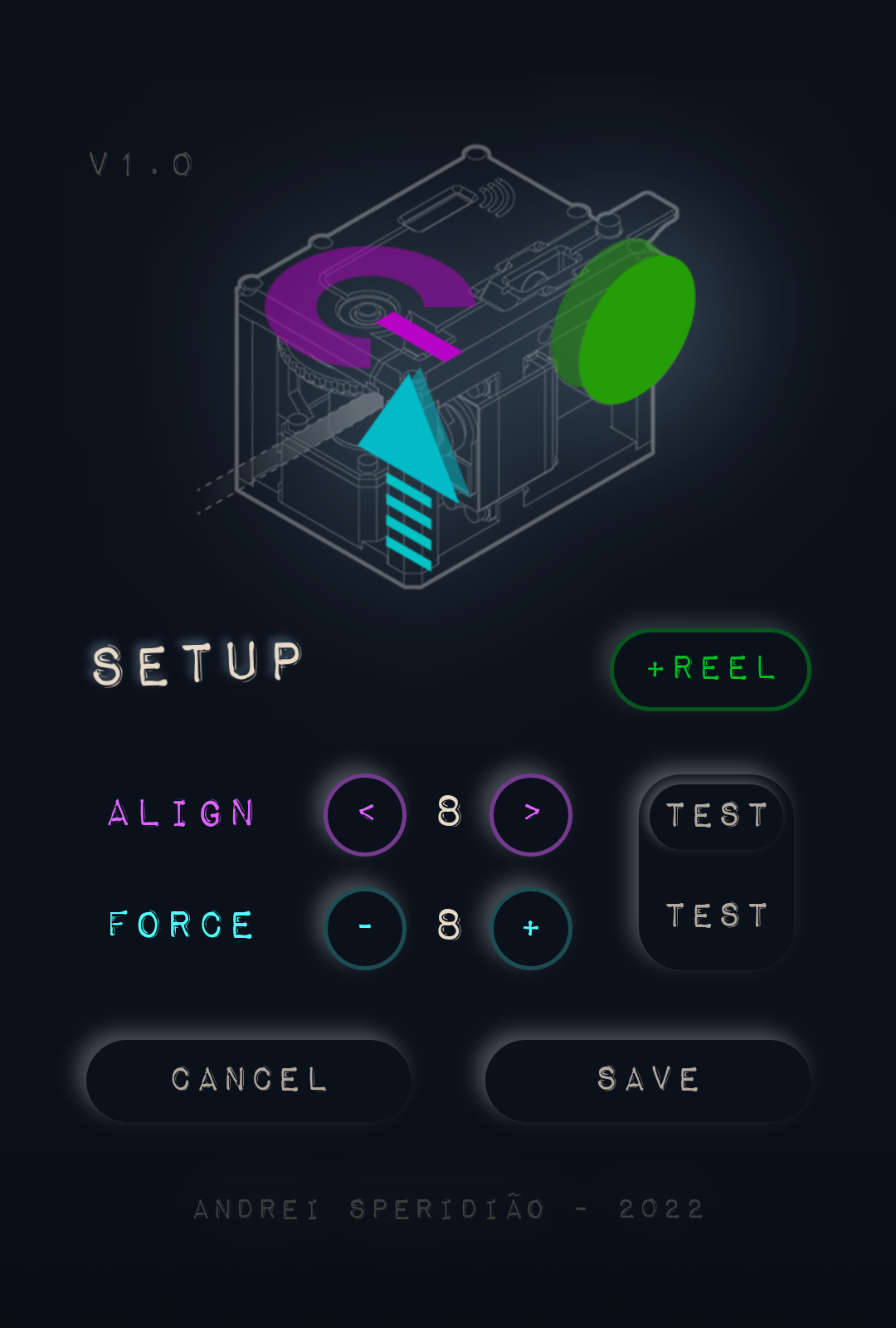 Alignment + test (light): it's possible to choose a value between 1 and 9 (5 is the default neutral). By picking a number, there is a test button on the right that when pressed, starts a routine that reaches to the letter "M" (widest character available) and very slowly moves the press towards the tooth until it lightly touches it. It is possible to check if the press is aligned when hitting the tooth.

Force + test (full): this parameter controls how much the servo will press the tooth against the tape, and of course, the tape should be already reeled. Again, values from 1 to 9, but this time 1 is the default, lighter pressure. To test, there is a big test button on the right that will end up testing both the force and alignment.

Cancel: if there was any unsaved changes it will pop up a warning, otherwise it goes back to the main screen.

Save: by hitting save, the machine will save the values in memory then reboot and the app will automatically refresh in 15 seconds.

PS: the "+ reel" button has been brought from the main screen.