Here is the electronics for The University of Akron 2014 FSAE ev car. To get a better understanding of the project I am attaching a system diagram here. 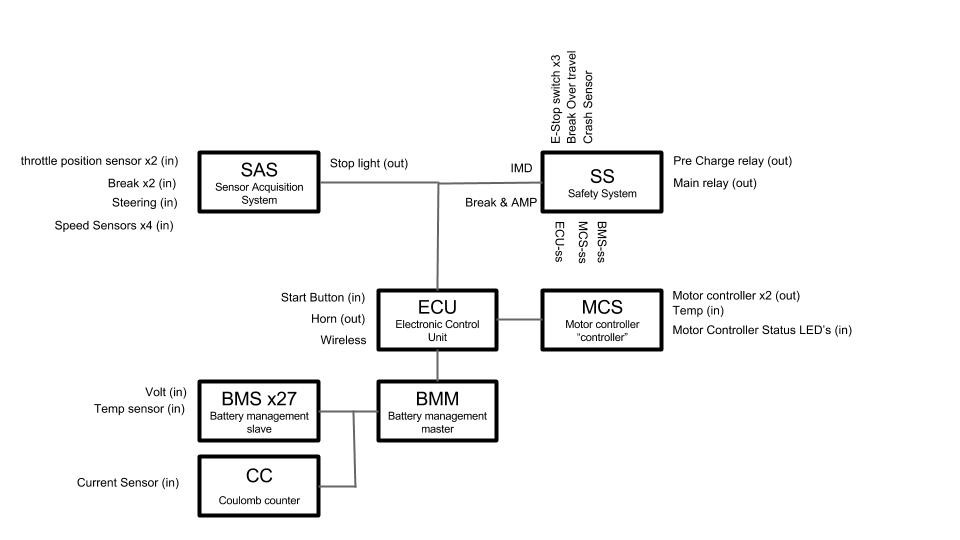 We decided to do what we like to call "distributive computing." This allows us to break up the tasks to different processors to allow the system to be more flexible and run faster. I costs more of course but if there was an error with one system, only that board needed to be replaced and not the whole thing. It also allows for smaller boards instead of one larger board. This makes it easier for our ME friends to hide the boards close to where the tasks inputs / outputs are for better integration and good noise immunity. 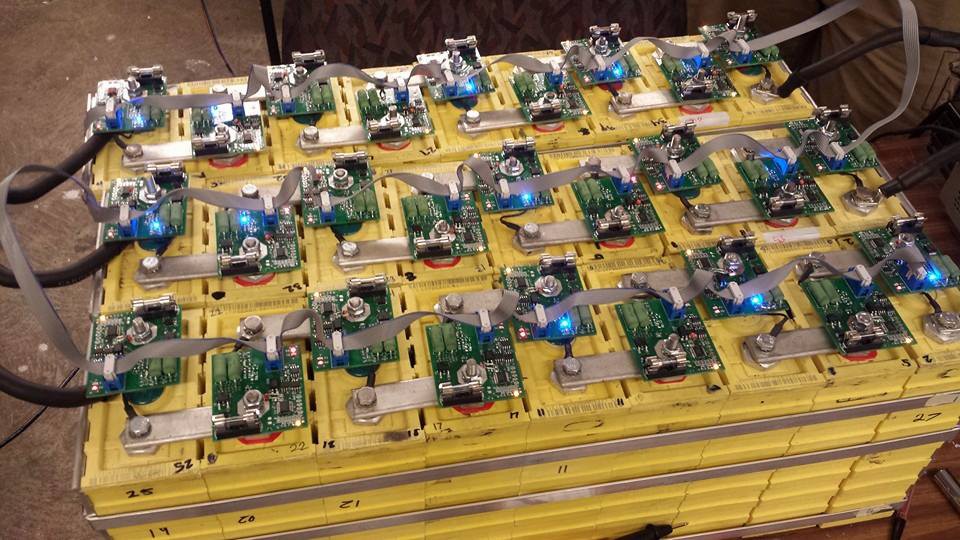 This year we designed our own BMS with a very high bypass capabilities for faster charging. (1A) 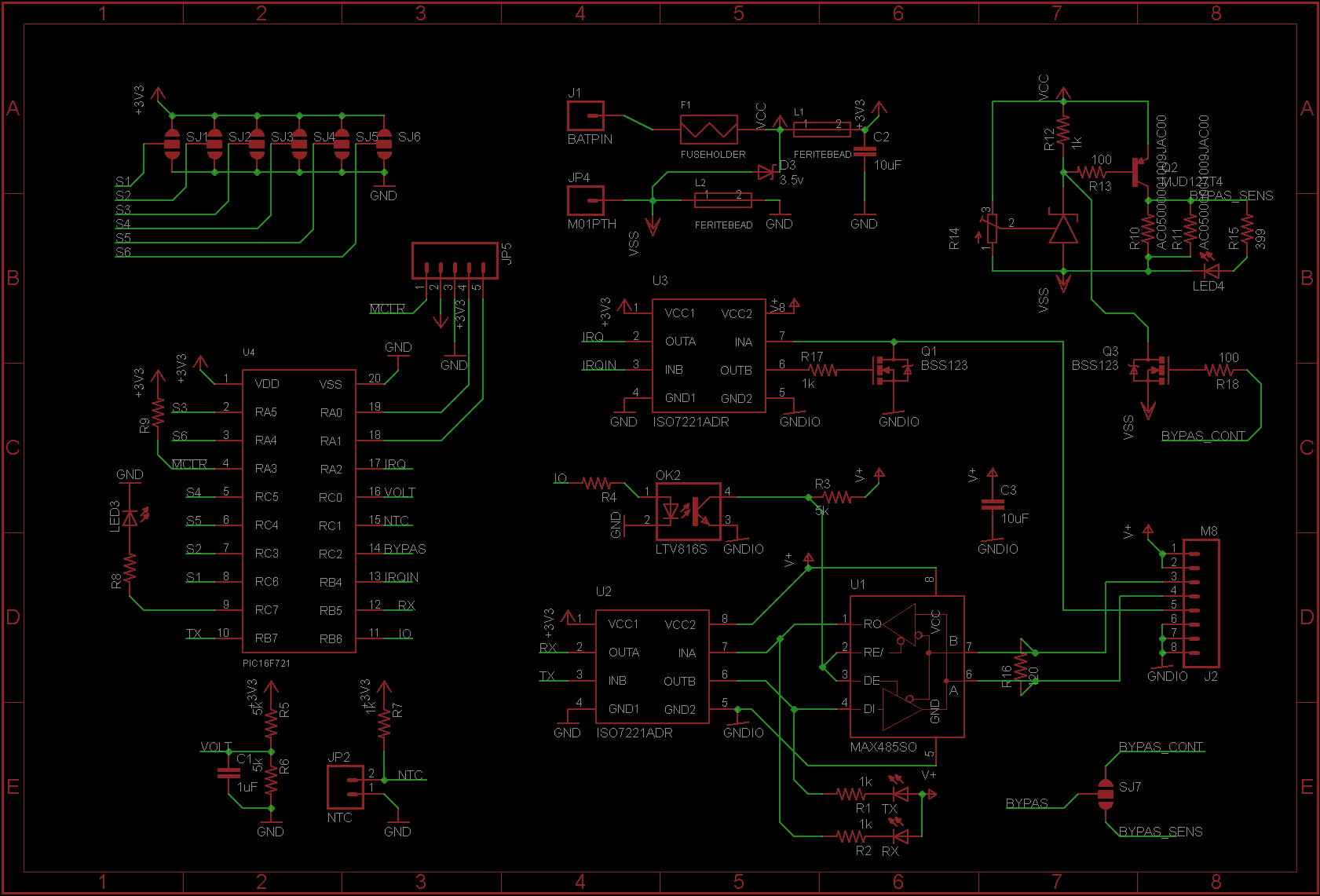 They talked to the master threw an RS485 bus in a 8 pin IDC cable.  This is more than adequate for charging and discharging. We control the bypass in software or hardware. We finally chose software so we could turn them on when ever we wanted. This allowed for a more controlled charge of the pack. We had the ability to set hardware addressing on each PCB. They have also the ability to do a "pack" interrupt in case there was an emergency on the cell it was monitoring... 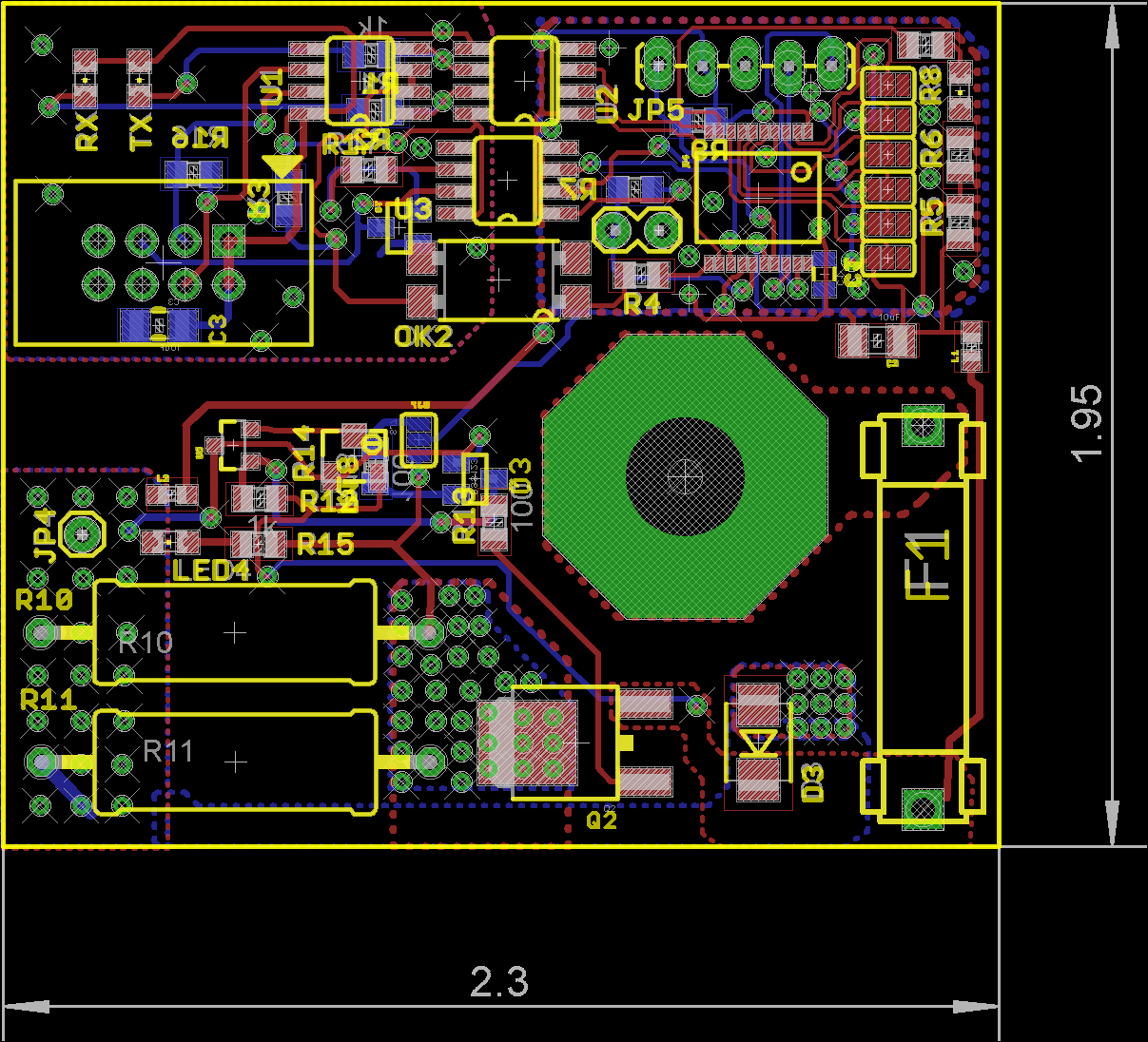 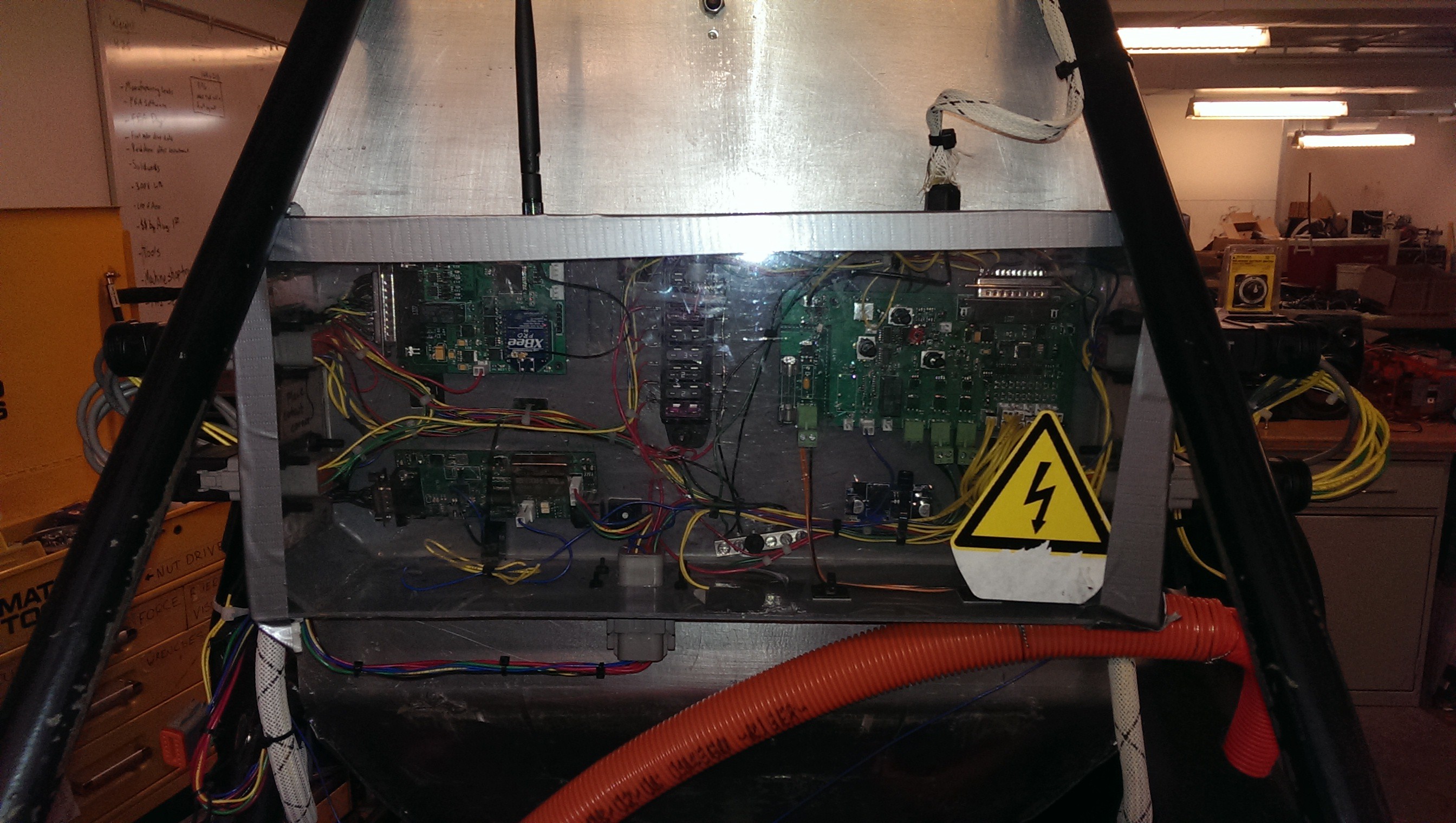 This box contains the main brain of the car, the ECU. That is the board on the top left. This gathers data about the car and decides what movements will go down to the two independent rear wheel drive motors. 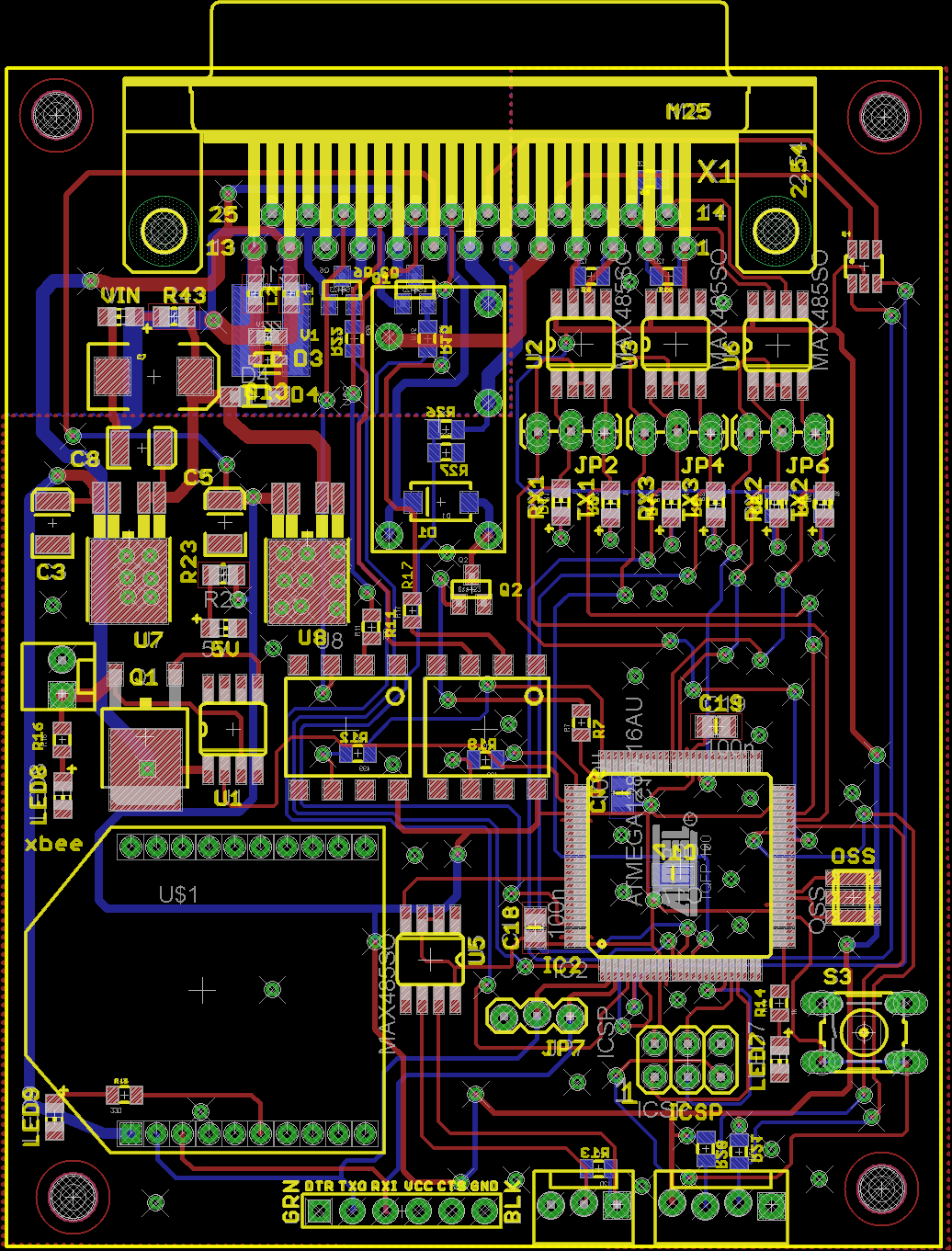 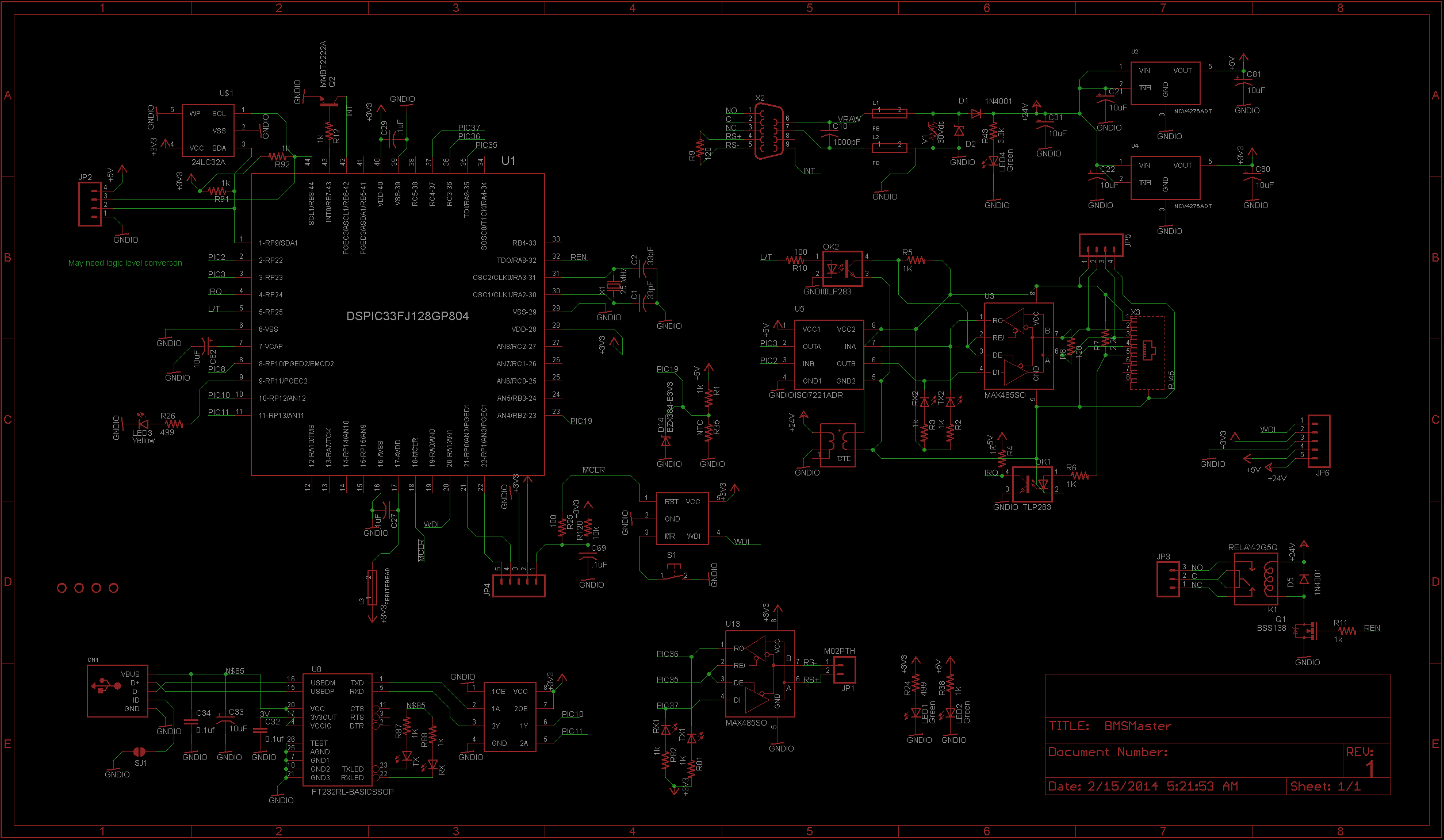 This box also hold the BMS master and safety systems. The safety system does what the name states, it makes the car safe to drive by wire.  And we want to be safe driving the car. This monitors all the safety switches and safety systems on the car.  It has the ability to tell the ECU what faulted the car (shut it off) to our wireless serial terminal. The safety board also controls pre charge, main, and discharge relays. 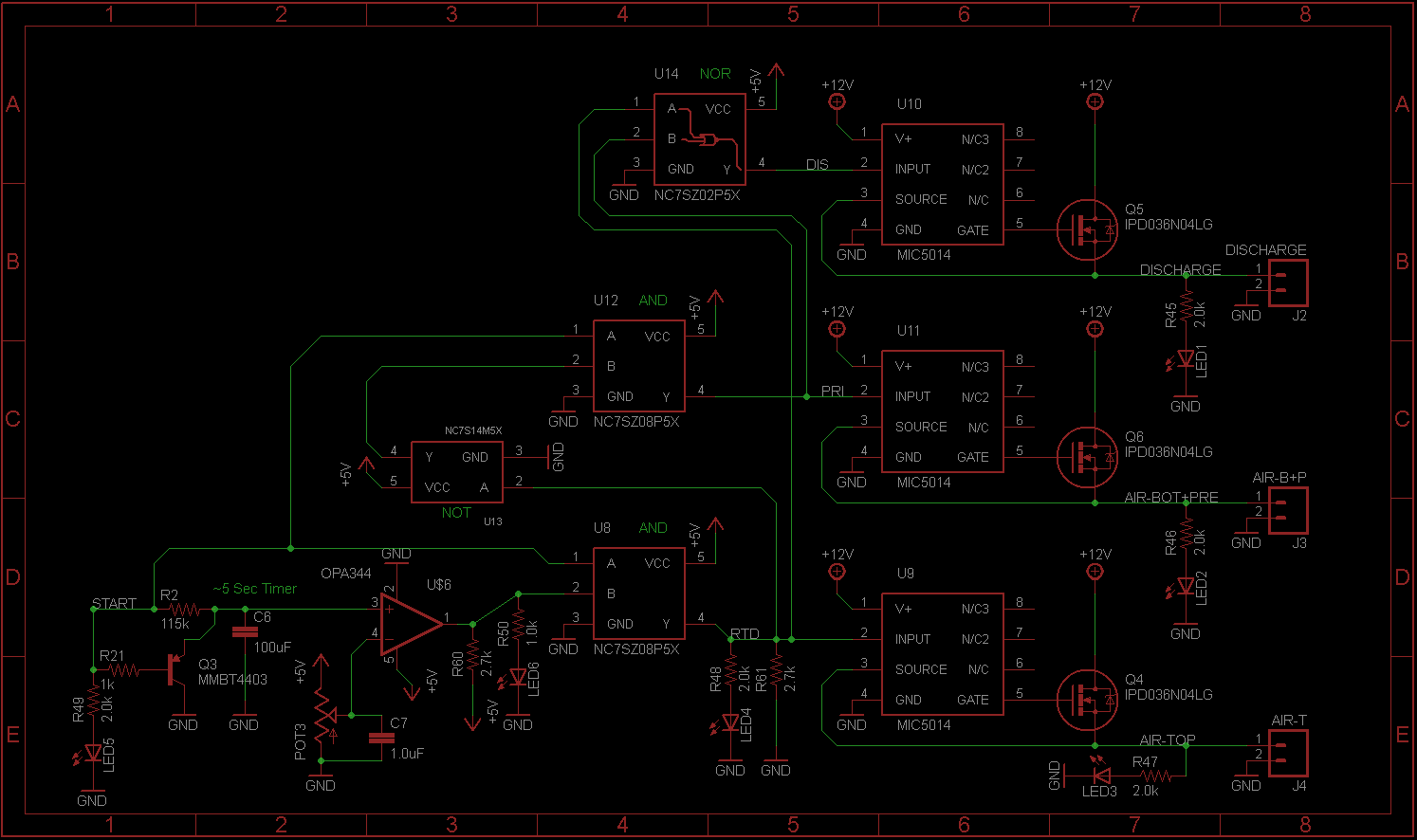 The BMS master talks to all the slaves and monitors different statics and conditions. We can talk to the entire pack in less than two seconds. It also acts as a charge controler. 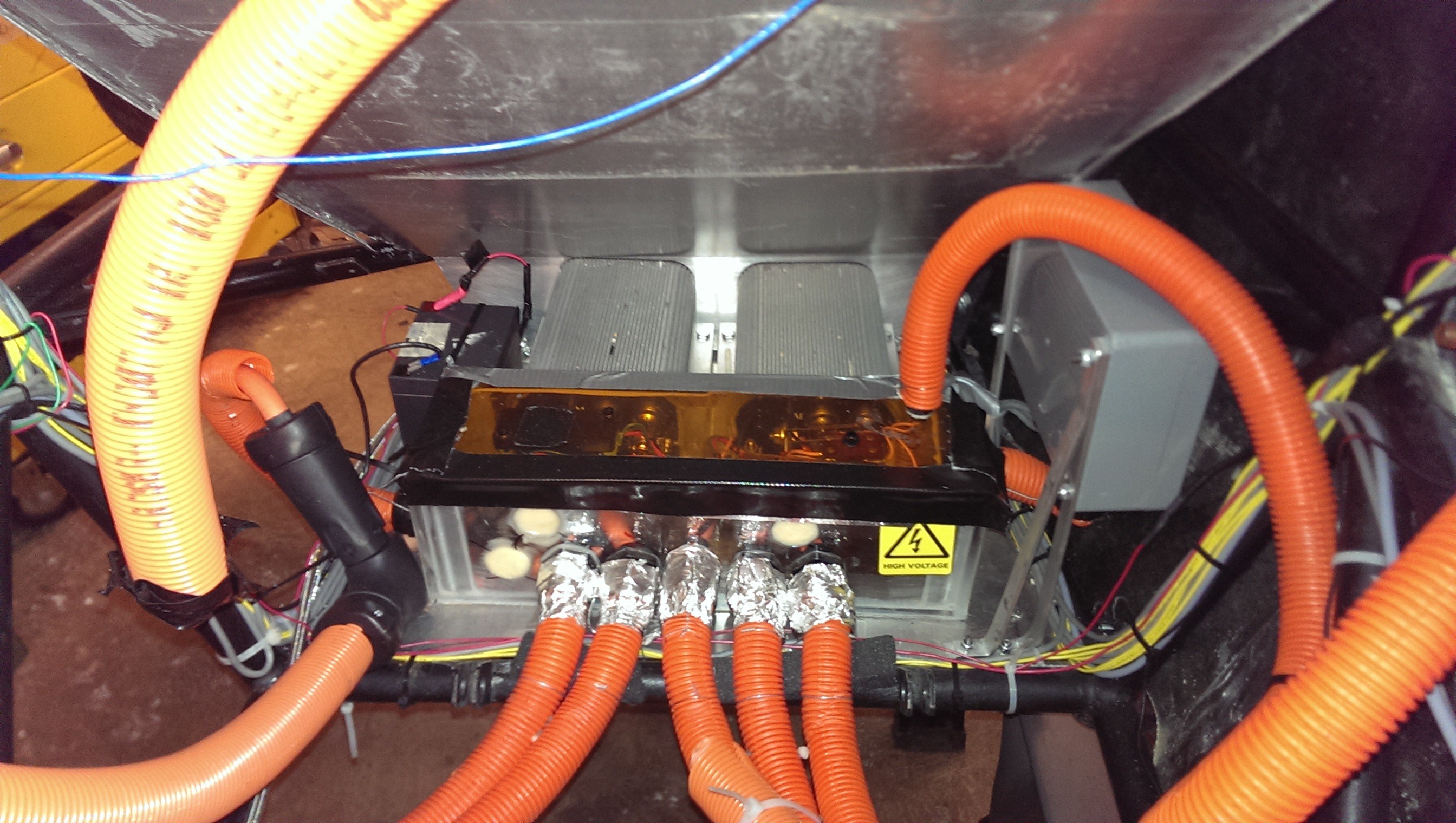 This is two kelly motor controllers that control the two independent motors driving the left and right side of the car. You can also see the gray box that holds another custom board that converts the RS485 serial stream coming from the ECU to an isolated analog output. The board also monitors motor temp and motor controller LED status codes. 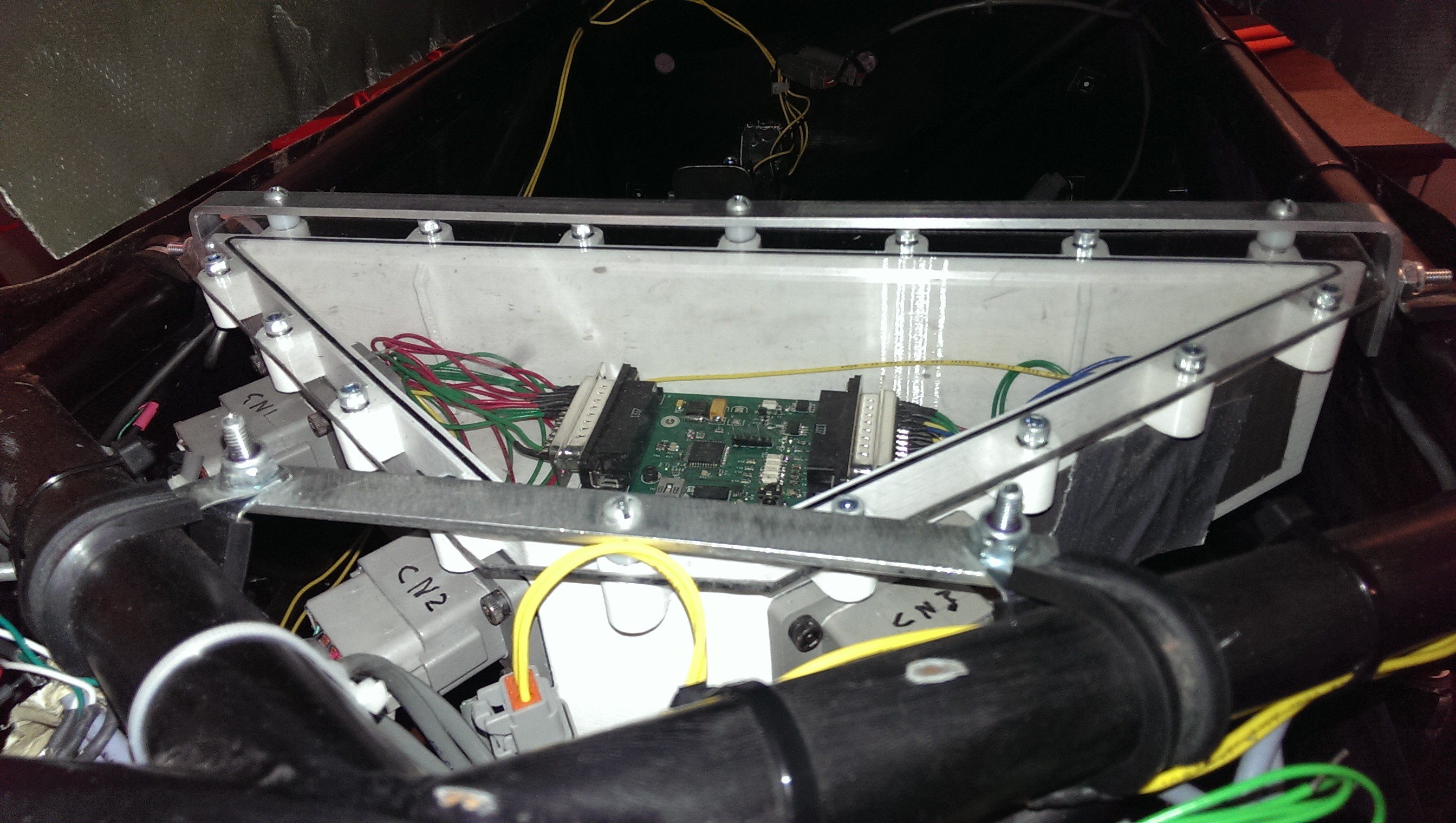 This board takes all the analog inputs (two for break, two for gas, and steering wheel position) and 4 speed sensors to make a clean software filtered digital serial signal to the ECU. It also controls the brake light. 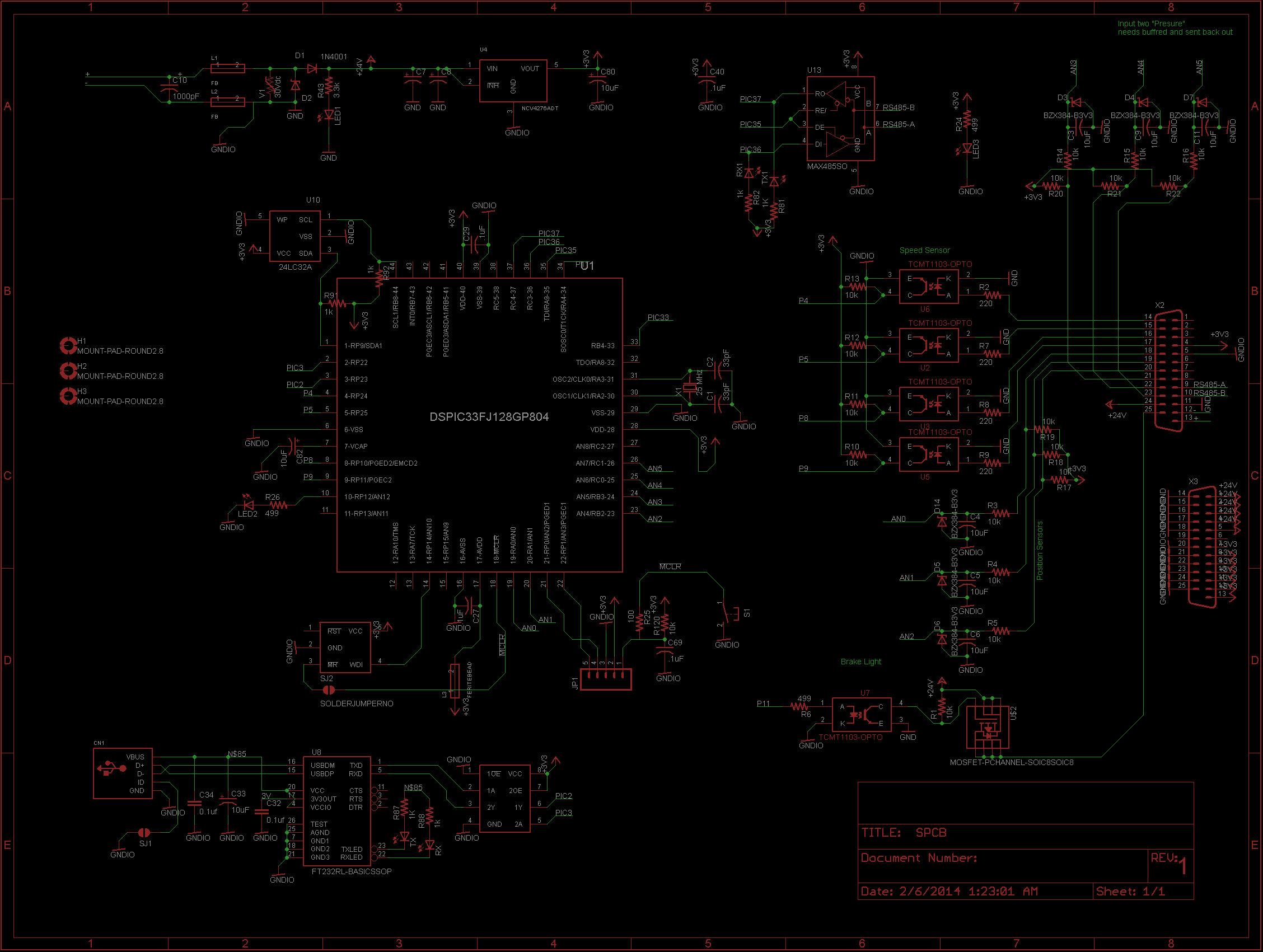 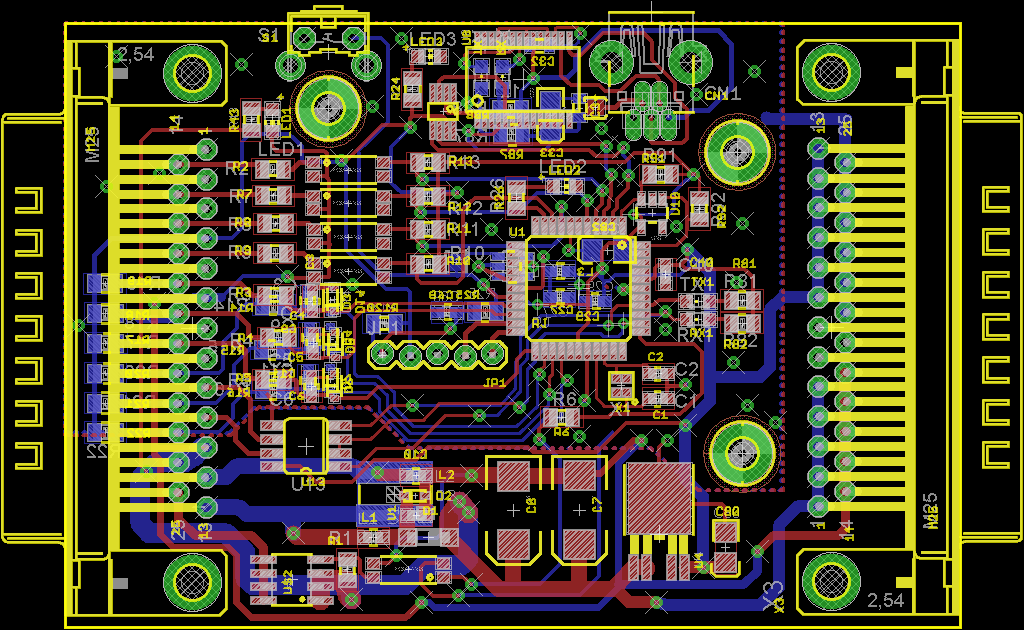 Its a great way to control and run the car renting program in any region. I need help to integrate it with Rent Escalade Dubai project.

What a wonderful idea I am also working on the same type of project here on horncastle car rent service website.

Richard Johnson wrote 09/25/2014 at 02:57 • point
The MCS is something I designed. But it isn't what controls the motors directly. We have an in between the MCS and the motors. It is a kelly controller The KDZ model.

Richard Johnson wrote 07/11/2014 at 18:12 • point
This is just a small section of the car. We are taking pictures and uploading our schematics and bill of materials. To answer your question, Yes, it uses a bypass resistor. We track battery capacity (current) overall and looks at voltage (at each cell) to bypass. This tells us individual battery level. We use our own communication protocol over RS485 to each board. As with other systems on the car use RS485. Also, the car uses xbee modems to configure the car and get diagnostic data.

I'd love to hear more about how each battery is monitored. Are they shunted out of the array as they reach full capacity? Do you do capacity tracking over the live of the array? You also need to document how data is being transferred between each board the main controller.

The 2016 Hackaday Prize
The goal of this project is to create a standardized outdoor robotics platform, similar to the Turtlebot.
Project Owner Contributor

Yet another Quadrocopter - built from scratch. Running on a STM32 evaluation board.
Project Owner Contributor