It turns out that the 24-bit floating point implemented in the XC8 compiler requires a few tweaks of the ray-tracing code. My goal is to re-write this all in 16 (or 24) bit fixed point, anyway, but the code I had ready used floats. Here's the problem: 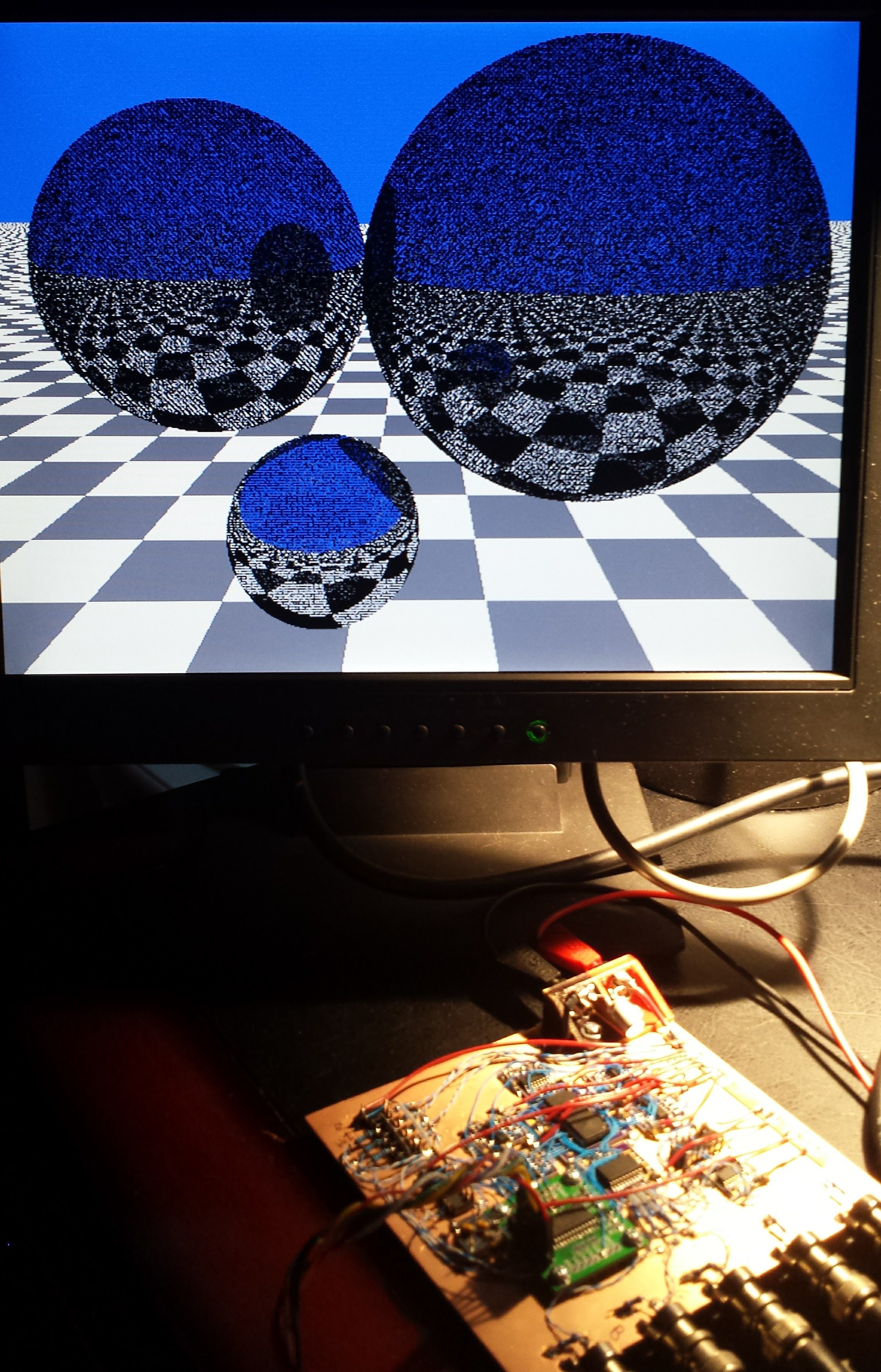 I tested this code on my linux box with IEEE 32-bit floating point, where my chosen epsilon was sufficient. Porting the code to the PIC with 24-bit floats looks like it requires a few tweaks. I changed one line to bump epsilon:

and I have it running again.

CONTEST DISCLAIMER: this code is 8.3kB in size.

My epsilon is still too large - dropouts on the left-hand sphere only now. It's running again... 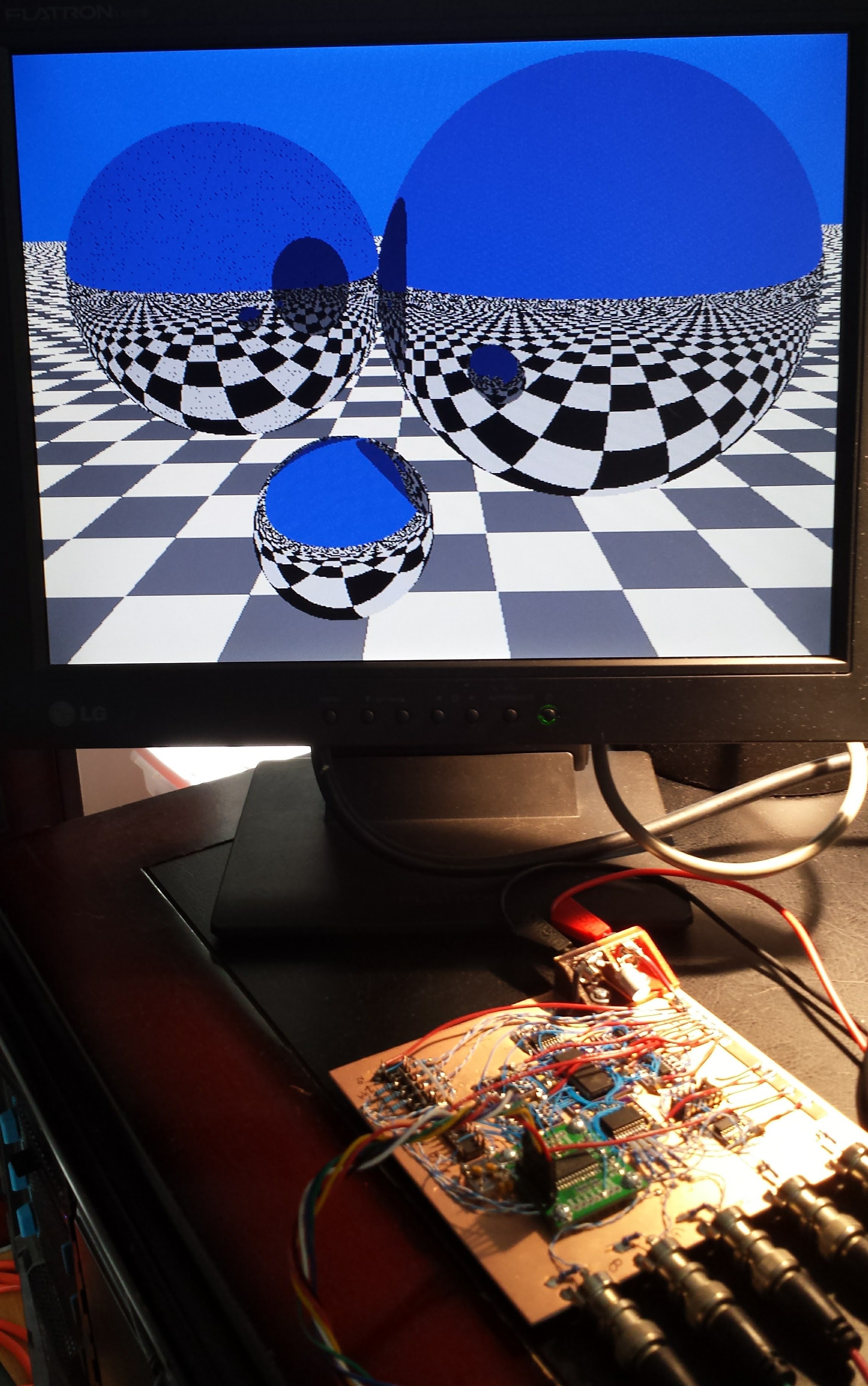 Can I have 9kB if I enter nine times?

haha, I like the first one better, it looks more like what one would expect this uC to be capable. The other looks too pristine, like "how do I know he didn't just plug a PC into the display's second input?" ;)

I forget where I heard it - maybe some architecture student told me - anyway, when you make a model of a space for a project, you intentionally put in a door that won't open fully or some other flaw that the professor is sure to find.  For some reason, this raises your grade - maybe it makes you less of a threat or something.

That's the problem with simple ray-tracers: the super-realism is distracting.  It took a long time to figure out how to make them look as crappy as real everyday scenes.

Anyway, the realism is not an issue, considering the run time...

Interesting, indeed. and probably wise words. Though, adding a flawed door to a project isn't something I'd have to do intentionally ;)

@esot.eric I think the magic only happens if you add another flaw on top of the natural ones - those you somehow always get dinged for.  It's just one of those things :-)

Looks amazing! How long does it take to calculate full frame?

I didn't time it exactly - I have an idea to run an external elapsed timer with zero added instructions, but haven't done it yet.  I estimated 8 originally, but I think it's between 2 and 3 hours - I ran one today, did a bunch of other things, and when I returned, it was done. I used to write things like this in compiled BASIC in the early 1990s (but I had an 8087 floating point co-processor), and it seems about the same.

I'm going to use an AA-battery powered analog clock to time the thing - I'll make a power supply for the clock with a resistor and a few 1N4148s as a simple 1.5V shunt regulator, and power the "regulator" from one of the PIC I/O pins on a port I'm already using.  I'll just add a "1" bit in one of the control words I'm already outputting.

To time the run, you manually reset the clock to 12:00.  It continues to run until the PIC drops the I/O line when it turns on the VGA display.  The clock stops at the elapsed time.

It looks like you create cool code that I can reuse to test my CPUs ? :-D

Thanks, Yann.  It's open-source, you can use it however you like.  But, it's simple one-off code that's probably not useful for anything other than demos on simple processors.  I ignored numerical details.

But, you're not seriously going to target a C-compiler to your relay CPU are you? :-)

C or a custom pseudolanguage will do, as long as the algorithm maps well.

The point is that I'll use the same architecture for relay, Ge and Si versions (I'm now considering creating the Si project page). The Ge and Si version might run fast enough to do "meaningful" stuff (a few MHz ? more ?). I'll cheat for the RAM (using standard fast SRAM) but then it will be too fast to run the game of life :-P

@Yann Guidon / YGDES Why not, indeed.  I wonder if emulating the simplest architecture that already supports a C-compiler might be the easiest route?  It's not quite the same thing, but would probably be the fastest way there.

I had a job programming dedicated imaging DSPs at one point.  They used an algebraic assembler language that was a proper subset of C.  So you'd see things like this:

Each line turned into exactly one machine instruction, so there were a limited number of valid C statements you could use.  But, since it was also a valid C-program, you could just compile, run, and debug it on your desktop before moving it to the target device.  Very convenient.

Oh, and I think the relay CPU could easily drive this VGA hardware.  There's no need for speed - the PIC is currently taking a few hours to fill the SRAM.  It could be weeks or months instead, as long as you don't lose power :-)

The Analog Devices DSP have an algebraic assembler, I remember my ADSP12xx/x fanboy years :-)

@Yann Guidon / YGDES Yes, I know the SHARC a little.  I had one and a half job offers with that company on different occasions, but for various reasons, I didn't end up working there.

I loved the SHARC so much, its manual was one of my favorite books during university :-)

For the relay computer, there is a direct memory-mapped flip-dot array (see #Dot flippers ) and it's pointless to have a VGA display (640×480 would take ages just for filling, even at 20 IPS)

The Ge and Si versions however could use a "dumb VGA" like your system. This is interesting because that would set the general clock to 25MHz (or a co-multiple) to avoid cross-domain clocking issues. If a CPU access is detected during a video line, the last pixel could be repeated (or I can use dual-banking).

Given the average 1:50 speed ratio between an individual transistor and the system speed, I'll need 1.2GHz transistors for a 25MHz CPU :-D The Ge are "around 500MHz" so maybe I can reach 12.5MHz ? The Si are BC549C @250MHz so I hope to reach a few MHz... These transistors are cheaper so I might implement some sort of pipeline.

But overall, yes, the 25MHz goal seems to be an interesting challenge since the original question was "how fast can Ge compute". 24.576MHz is also a good idea for direct division to get serial communications.

Additionally, I consider adding a MMIO bus to access a WZ5300 for networking purpose and I/Os :-)

That thing is going to be crazy...

@Yann Guidon / YGDES The 1:50 ratio is very interesting.  What is it based on?

of course my version will have considerably more capacitances and inductances so the ration might be higher, and I didn't take pipelining into account.

@Yann Guidon / YGDES Thanks!  Interesting links; I'll have to read them more thoroughly when I get the chance.  It's funny that stuff came out of RPI.  I spent (too) many years there as a student - I still live about 30 minutes away :-)