Re purposing a propriety rf remote control for maximum laziness

The previous owner of my house installed remote controlled ceiling lights in all the bedrooms. This was really cool for a couple weeks, but now I’m realizing that it can be really annoying when I misplace the remote. Each room has a separate remote that only works for that room. Extra remotes are both expensive and hard to come by. Making my own rf remote is impractical as they run in the 400mhz range and there is generally very little documentation about the radio codes for this fan model.

To circumvent this, I disassembled one remote and soldered transistors directly to the physical button contacts. An esp8266 is used to control the transistors, allowing me to switch them using the cayenne dashboard or via other wifi connected microcontrollers.

The old remote had functions for fan speed, light on/off and dimmer. The built in buttons and sliders in the cayenne dashboard allow me to use all functionality of the old remote, plus I can set the dimmer level to a specific value right away, rather than having to look at the light while I adjust it.

Furthermore, this all fits inside the old remote housing! I opted to add a barrel connector to the bottom for power, so when “docked” it works as either a physical remote or wifi-connected remote, and when unplugged the physical remote still works due to the internal 9v battery. 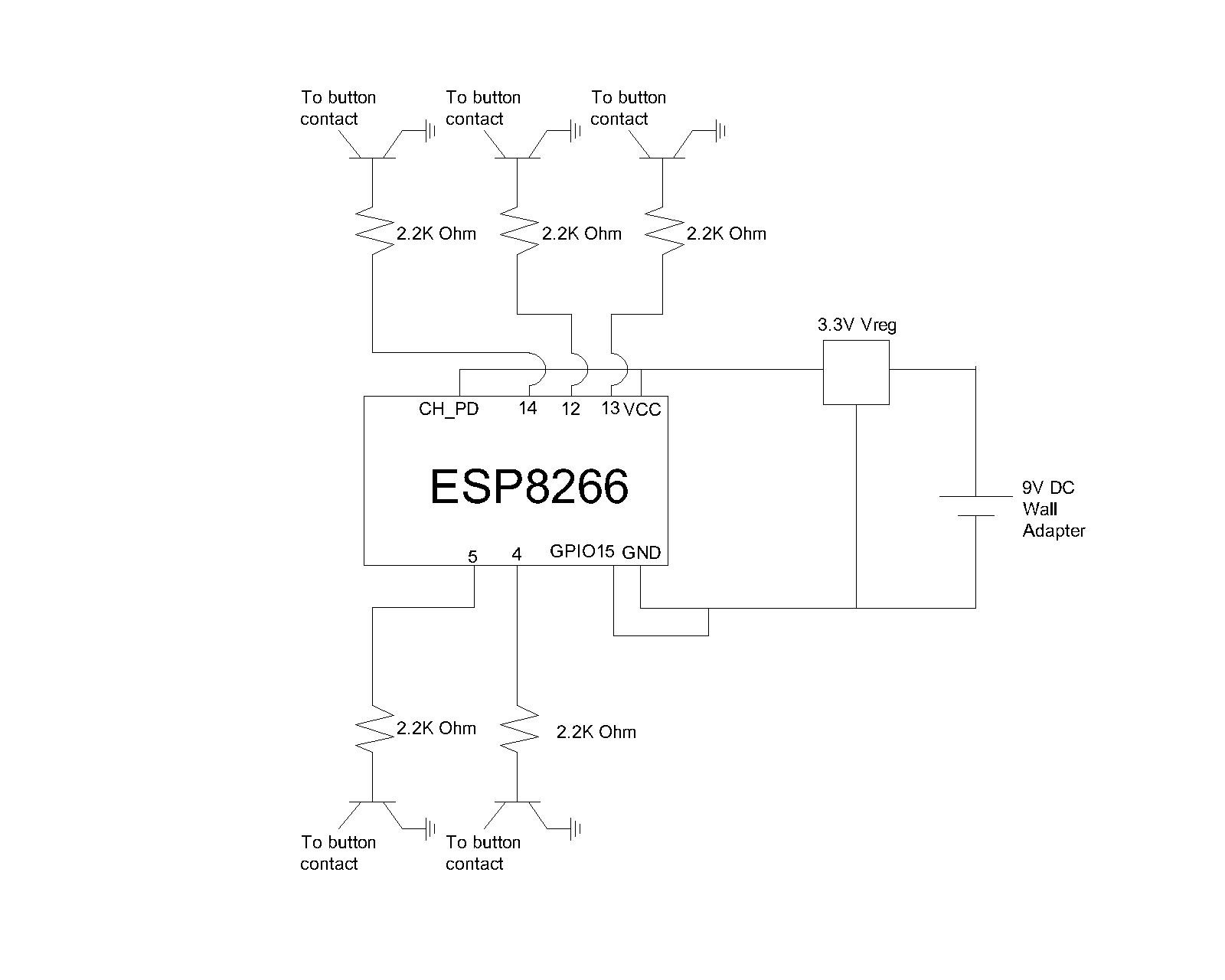 The arduino sketch is very simple and just deals with the inputs from the cayenne dashboard. For the light on/off and fan control, I am just controlling the HIGH/LOW behaviour of the GPIO pins. The dimmer is a bit more complicated because it is normally adjusted by long-pressing the on/off button on the remote. Cayenne does not have this functionality so instead the arduino has to keep track of the current dimmer level and calculate how long the pin should be pulled HIGH to reach the next desired brightness. As usual with the ESP8266 boards, I am using the OTA method to upload to them as it allows me to modify the code even once it's installed in the remote.

Cayenne is a dashboard for internet-connected devices that allows for simple interaction with the device and visualization of incoming data. I am using two sliders to control fan speed and brightness, and a button to control on/off of the light. I am also able to set triggers to perform actions based on events, like time of day. This could be useful to automatically turn off the lights past a certain time at night or when I leave the house. 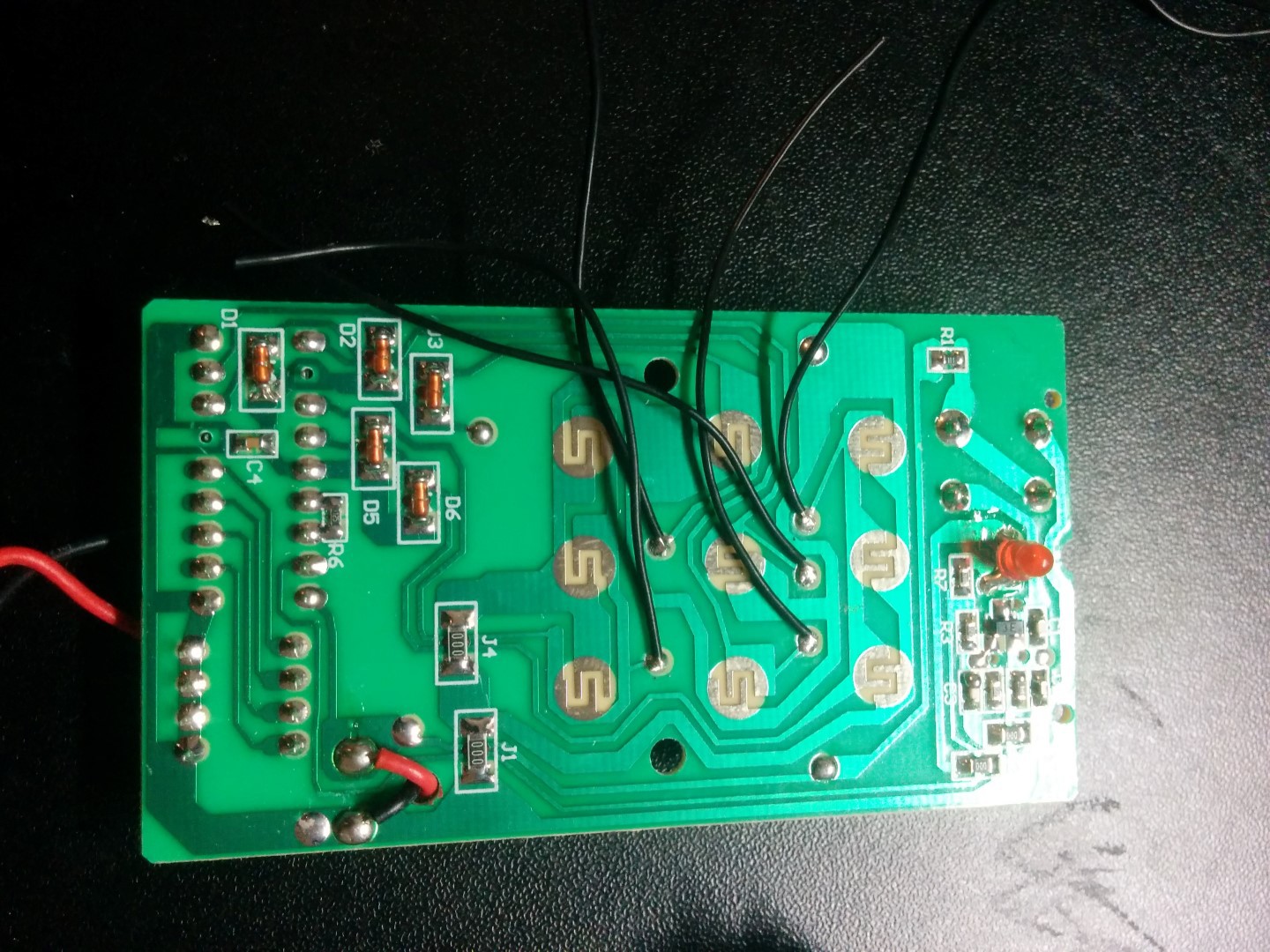 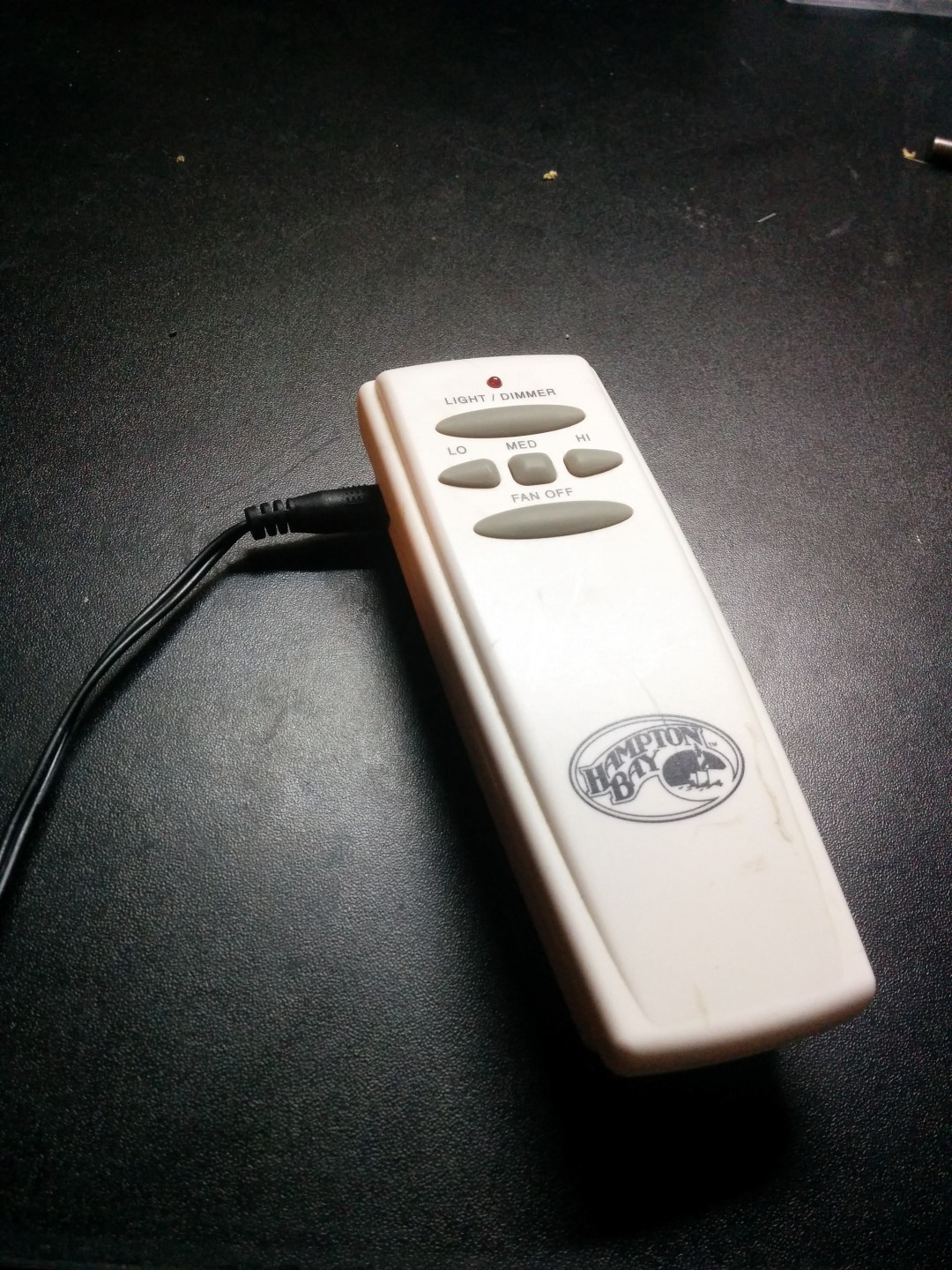 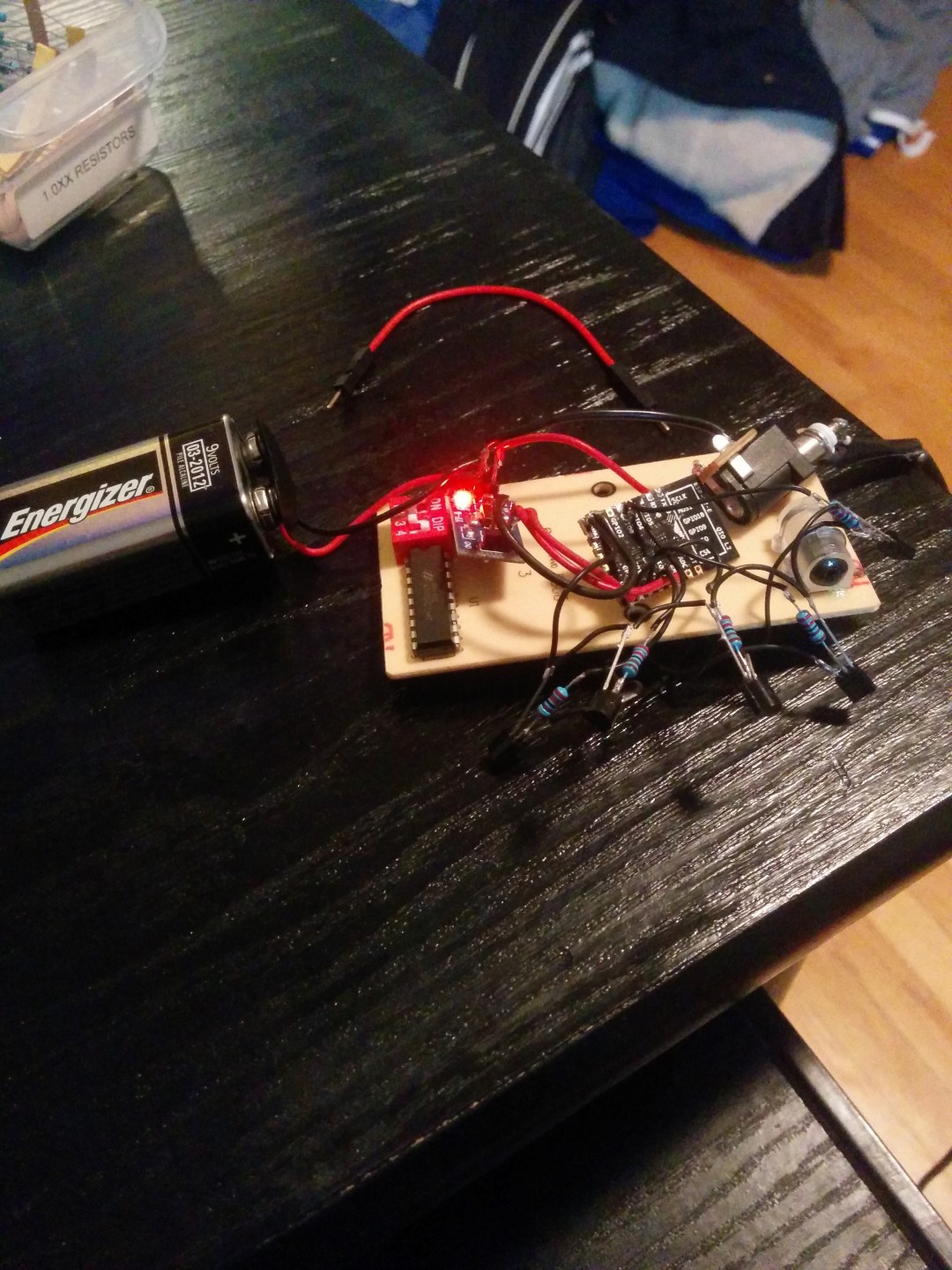 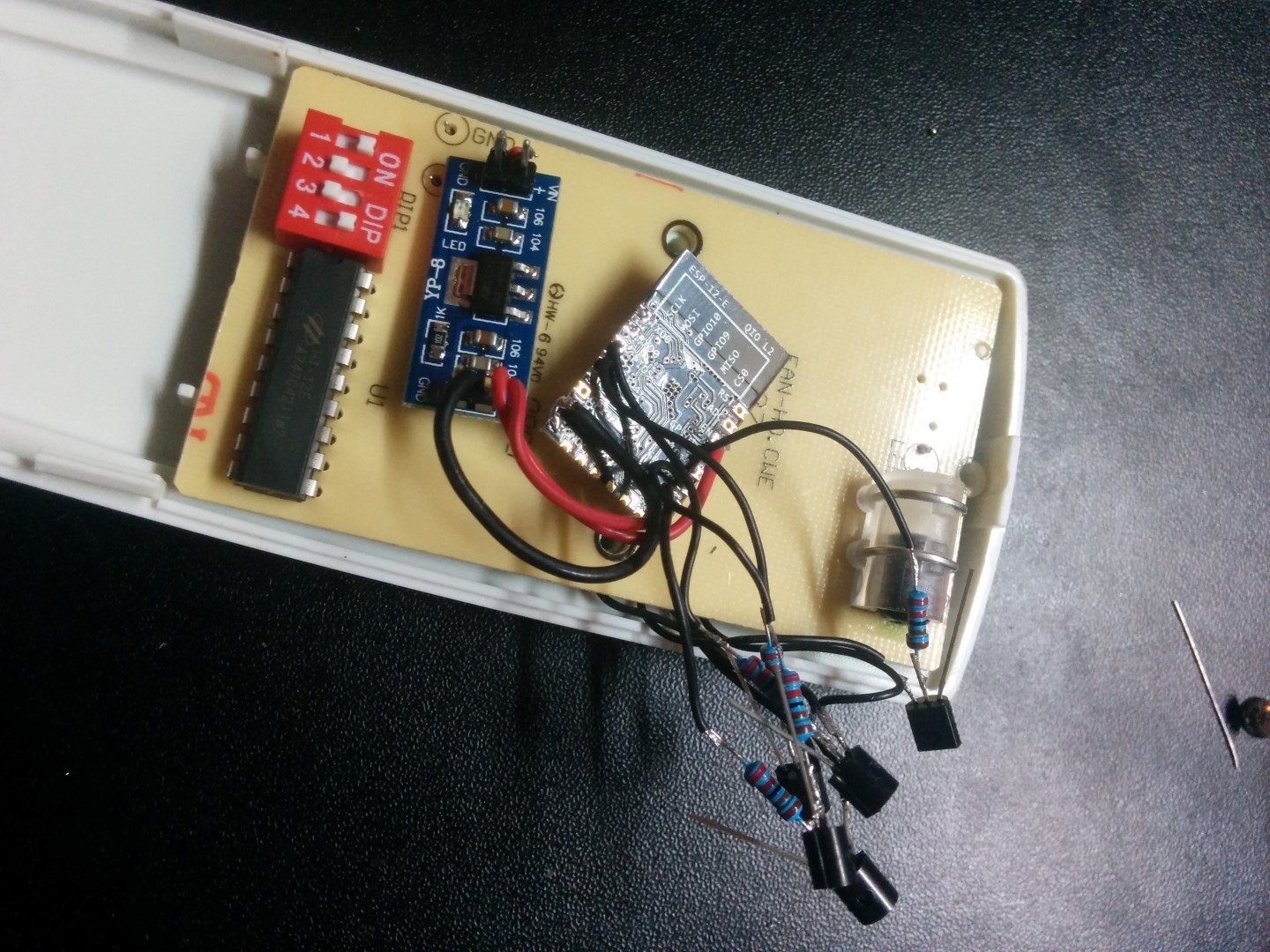 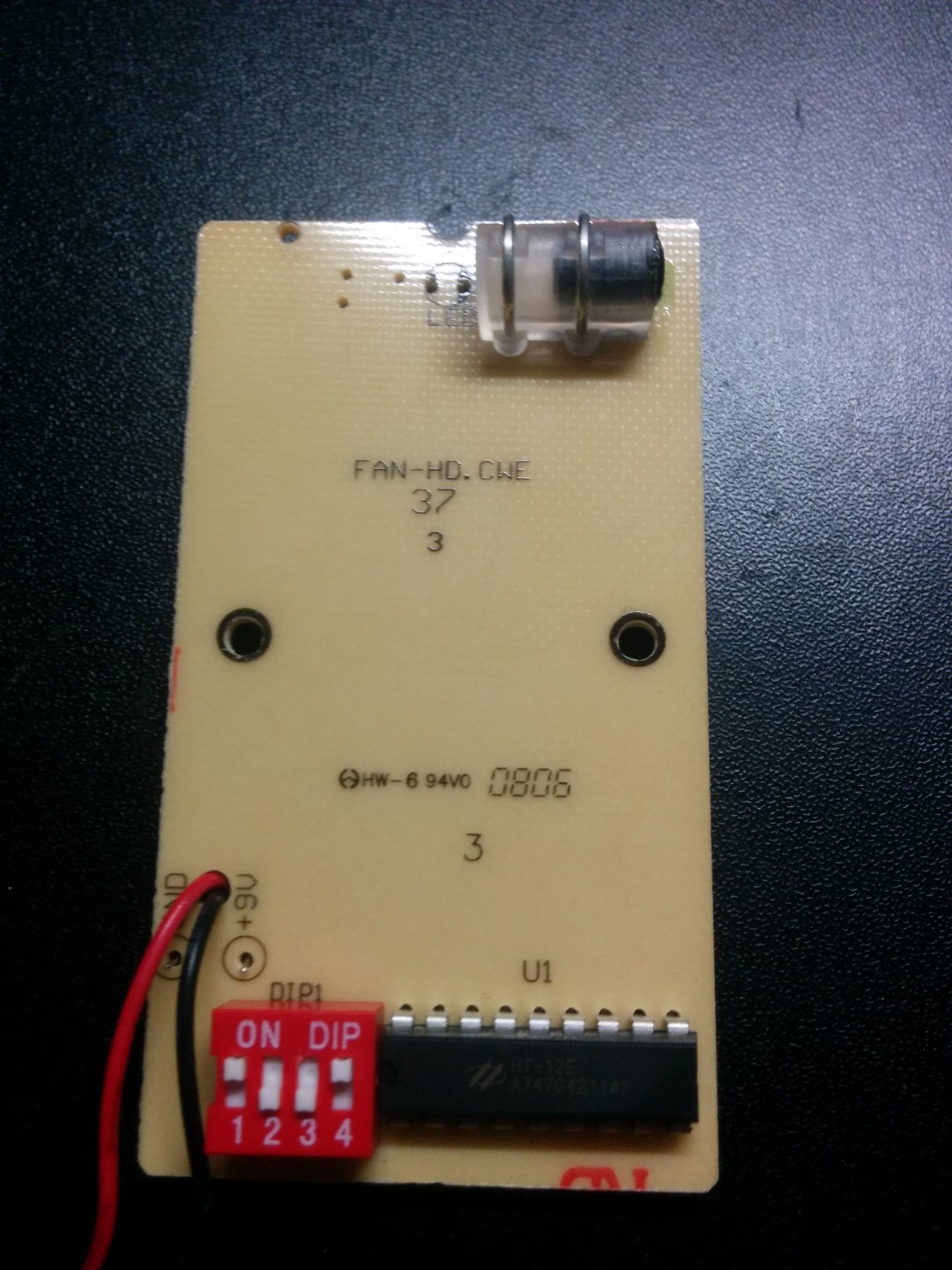 You might find a little thing called the CD4066BE useful ;) four bidirectional analog switches on a single DIP chip. Warning: max current on each switch is 10mA, which is /half/ of an LED. More than that and out comes the magic smoke. Good for small signal use, though, so it might be useful here.

There is enough space in the remote housing to accommodate everything as is, but if I remake this project on a pcb the quad channel switch will definitely be replacing the transistor wiring mess. Thanks for the idea!

Arduino program to generate IR remote control ON/OFF toggle signal when lights are turned on, or periodically to clean the air in workshop
Project Owner Contributor

A project to activate a remote control for a garage via smart phone using an esp8266 module, a pair of relays and some cloud services.
Project Owner Contributor